By Don Kreski
With stunning AV systems installed by CompView Audio Visual, this school's new athletic center is unlike any other.
Tweet 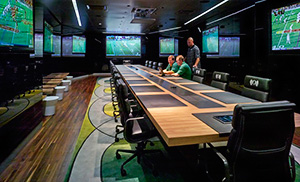 Somehow, you have to turn raw high school recruits into championship players, while never losing sight of the fact that academics are the most important reason they are on campus.

So when the University of Oregon set out to build a new football center, they knew it had to be a model of efficiency and effectiveness for educating, recruiting, and motivating players while keeping them in shape.

The university’s new Hatfield-Dowlin Football Performance Center opened for the 2013 football season with stunning audio and video systems installed by CompView Audio Visual. At first look, a 64-screen video wall in the lobby of the six-story center seems the most impressive of these systems. However, it’s the nuts-and-bolts of video distribution, display, control and audio that support the center’s mission.

“Our new center is probably the most effective and efficient building in either college or pro football,” says Jeff Hawkins, senior associate athletic director for football at the University of Oregon.

One of the roles the center plays is educating students on how to play the game of football.

For filming, Day relies on XOS Thunder software, which is a widely used platform to edit, organize and display sports videos. After filming, the end result is a collection of hundreds of thousands of 10 to 20 second-long clips, which coaches use to illustrate the right and wrong ways to execute plays.

The video systems within the Hatfield-Dowlin Center are also designed to optimize the creation and playback of these clips. Coaches can access film from their individual offices, and coaches and players can view it from computers or iPads outside the building using Hudl, a cloud-based service specializing in sports video distribution.

“We may put game film on one screen and a diagram on a second, and perhaps an excerpt from a book we’re using to help teach our students about life on a third,” says Day.

“The coaches need to annotate the clips as they talk about them, in much the same way that John Madden would do it on network TV, diagramming the play right over the video,” says Eric Boyd, systems integration manager for CompView.

If they’re explaining new plays or want to show simple diagrams without video, they can draw them up on paper and project them via a WolfVision document camera, or they can create them on their computers or iPads.

“On game day, crowd noise can be extremely punishing,” says Chris Rogers, CompView’s project manager. “Oregon asked us to install a sound system that could help their players prepare for that experience.”

“We have the ability to broadcast actual crowd noise,” says Day, “But five minutes of that makes you want to scratch your eyes out.”

As hard as Oregon coaches work to educate their players, they know that motivating teamwork is crucial to their success. The facility itself is inviting, with natural light, comfortable furniture, the latest audio, TV, and video game systems.

“The technology throughout the facility encourages players to stay here and interact with their teammates, rather than going back to their rooms and hanging out there,” says Day.

In addition to producing game and practice film, the video staff creates inspirational videos on an ongoing basis, shown before and after practice, on game days, on the lobby video wall and on the recruiting website.

“The staff is big on filming how the kids work out for their inspirational videos and recruiting films,” says Boyd.

CompView also installed a digital signage system with monitors in the locker rooms, hallways, and other areas of the facility.

“They develop their own content on site,” says Boyd, “And a lot if it is designed to inspire the players.”

While all of these systems are designed to educate and inspire Oregon players, they also affect potential recruits.

A recruiting center within the building offers a comfortable place for coaches to talk to potential players and their families. A separate visitors’ lounge has its own TVs and gaming consoles, and a video conferencing room. These rooms also come with a Cisco C40 codec, Crestron control and Crown PZM ceiling microphones, which allow coaches to confer with scouts in the field.

The Cisco-based video conferencing system makes it easy to connect to up to four sites at once at full high definition (1080p). With this feature, participants can include game clips or computer files in any video-based conversation.

“At the end of the day, if a student wants to come here because of the building, he’s missed the point,” says Day.  “We do use it as a showcase to demonstrate how well we take care of our players. Those who decide to join our program will find the best of the best in everything we do, including the building where they will spend most of their time in athletics.”

Click on the images below or the 'next>' link above to see these amazing installs.

Converged infrastructure solutions are taking the tech world by storm. Why are they so popular and which ones are most suitable for SMBs?

TechDecisions’ Most Notable Products of 2014

Recommended by industry leaders, here’s a list of eight notable products that stood out last year.

Jabra PanaCast Review - Get Your Huddle On
END_OF_DOCUMENT_TOKEN_TO_BE_REPLACED