By Matt Whitlock
2013 was the breakout year for touch-capable displays on the vast majority of notebook PCs, giving rise to a massive resurgence in interest for PCs that can serve as both tablet and notebook.
Tweet 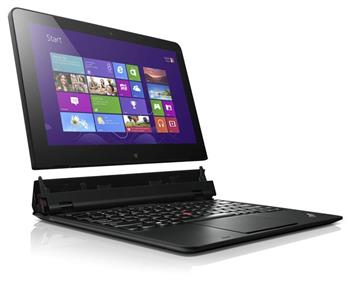 Recently we talked about technology trends for 2013 which emerged during the Consumer Electronics Expo in January. One of these trends is that 2013 is the breakout year for touch-capable displays on the vast majority of notebook PCs, which is also giving rise to a massive resurgence in interest for PCs that can serve as both tablet and general computing device.

So, I thought it would be interesting to take a closer look at hybrid/convertible PCs and highlight a few of the best products available right now. Apple may be given all the credit for the popularity of tablets thanks to the iPad, but truthfully companies like Microsoft and IBM were early pioneers in tablet computers years before Apple ever gave it a go. Sadly, tablets like the 2005 Thinkpad X41 never really gained much traction. People are quick to point the finger at Microsoft and XP Tablet Edition as the cause, but fingers are the whole reason XP was tweaked for tablet usage anyway. At the time, touch displays were either resistive or used a digitizer for stylus input, and were not the convenient multi-touch capacitive displays in use today. Digitizers and the stylus were the favored 'touch' technology at the time, and the Windows traditional desktop works well with precision pointing devices.

Ultimately, early tablets were simply too bulky, too heavy, and offered too little battery life. Today, ARM tablets running iOS and Android are largely consumption devices with limited (but growing) productivity abilities. For some, it's "good enough," although I can't help but chuckle when I see a $600 iPad paired up with a $100 Bluetooth keyboard case - resulting in a device that's often bulkier, heavier, costlier, and still less versatile than a decent notebook. Those who want the best of both worlds ultimately have both a traditional notebook PC and a tablet, and often carry them simultaneously.

This year the forever "doomed" PC will fight back by kicking the large screen tablet market in the shins. The stars are almost in alignment for the PC and tablet to merge into one harmonious device. After all, if one device can offers a great tablet experience with awesome battery life, as well as a great mobile PC experience, who would want just a tablet? Note that above I said "almost." The first generation of hybrid devices that have come to market since the launch of Windows 8 come with caveats, the tradeoff being it usually works great as a laptop or tablet, but not both.

The current generation of x86 processors is mostly to blame. Intel's Ivy Bridge mobile parts offer a lot of performance, but consume too much power to get crazy-good battery life and don't offer a lot of the features expected in a mobile device. Intel's current generation Atom processors are integrated SoCs that offer benefits similar to ARM chips, but lack the raw horsepower to plow through heavier x86 applications. Come fall, Intel will release new processors aimed directly at bridging the divide between battery life and performance.

Despite the tradeoffs, click the images below or the 'next' links to see 5 x86 PC hybrids available and worth checking out.

20 Favorite Apps from the Pros to Help Productivity

Four A/V and IT pros share their recommendations on apps they can't live without on their mobile devices.

Disinformation: Smarter Every Day
Best Cities for Tech Jobs in 2021: Where Can You Make More Money?