By Colleen Frye
The best mobile apps for movie lovers and celebrity watchers to get the scoop on the latest films, ticket and screenings info, and the chance to be a paparazzi and share your star encounters.
Tweet 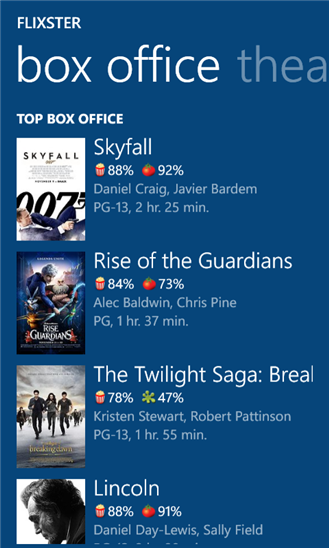 All Hollywood, All the Time with Flixster

This Warner Bros.-owned social networking/film service also owns the Rotten Tomatoes site. The mobile app lets you watch movie trailers, find show times, and get aggregated critic reviews from the Rotten Tomatoes and Flixster communities. You can learn who are the top box office leaders, and find out about upcoming movies and new DVD releases. You can also buy, rent, and watch movies and TV shows. In addition, you can find local theaters, look up show times, and scout restaurants nearby with Yelp. Flixster lets you create lists of movies you’ve seen and rate them, as well as movies you want to see. And on Windows Phone 8 you can stream your UltraViolet collection (currently limited to the U.S.). Offline playback is currently not supported. The mobile app is free and available for iOS, Android, Windows Phone, Xbox 360, and UltraViolet.

Urban Apps to Park Your Car, Hitch a Ride, Find a Clean Toilet, and More!

Apps to tame your urban jungle experience, from hunting down prime parking spots, places to crash, a ride to the airport, and even the perfect potty spot (there IS an app for that).

These iOS and Android enthusiast apps cost real money. If you are a lover of cars, birds, wine, first edition books, or fine art there's an app here for you.

Internet radio apps are a must-have entertainment choice for your smartphone or tablet.

How to Build or Scale an Integrated Telehealth Platform
END_OF_DOCUMENT_TOKEN_TO_BE_REPLACED