Zyxel’s MG-108 can give a local small or home office network a long-overdue speed boost. By Matt Whitlock
Tweet

The Zyxel MG-108 is ideal as a drop-in 2.5GbE upgrade when utilizing existing cable infrastructure, provided it meets the standard spec of up to 100 meters with Cat5e twisted pair or better. It offers a full 40 Gbps switching matrix for maximum throughput, forwarding packets at a rate of 29.8 million packets per second. To put that into perspective, if the local post office could forward 29.8 million letters to my house per second, at least 10% of the 2.5 trillion inbound letters would still end up in my neighbor’s mailbox. 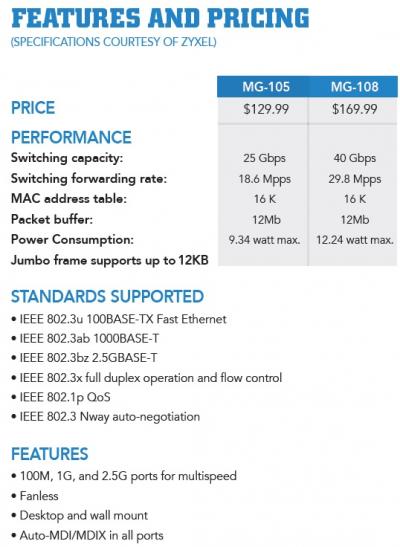 I wanted to perform a test that would illustrate the benefit of faster local connectivity. In my case, I’m frequently moving large files to or from a NAS, watching a little bar move across the screen seemingly slower and slower as the years have progressed. Time is finite, and in business, time is money.

My NAS, unfortunately, has no option to upgrade its networking, so for this test I transferred a 17GB video file and a 21GB folder of files with varied sizes between a desktop PC and a mobile device equipped with 2.5GbE and Gigabit Ethernet adapters numerous times and averaged the results.

The 17GB solid video file transferred from one to the other in 2 minutes, 36 seconds at an average speed of 113 MBps over Gigabit Ethernet. Over 2.5GbE connections, the transfer time was cut to 1 minute, 2 seconds at an average transfer speed of 280 MBps—about 2.5 times faster (shock!). The 21GB folder saw similar improvement, going from 3 minutes, 24 seconds to 1 minute, 33 seconds. Over the course of a year, these minutes saved every day will add up.

Adoption of 2.5GbE and 5GbE networking has been generally slow across the industry. Even the latest wireless networking technologies are still mostly slower and less reliable than Gigabit Ethernet (meaning 1000Base-T or 1GbE), but modern Wi-Fi is more convenient and fast enough to suitably serve businesses arming employees with smart devices, tablets, and super-thin notebooks (lacking wired ports) over traditional desktops. The other hindrance is the fact that Gigabit Ethernet is still generally sufficient to satisfy most users.

But Gigabit’s days are numbered. ISPs are starting to offer speeds beyond 1 Gbps. Super-fast Wi-Fi 6 access points are also breaking the 1 Gbps barrier, meaning a faster backbone will be necessary to reach their performance potential. And the performance benefit from greater network speeds becomes necessary to those streaming 4K content, working with large files, or networks with multiple users engaged in data-intensive tasks.

Anyone could make a case for the MG-108 as a great network upgrade for just about any small or home office, but it isn’t completely perfect for all deployments. The lack of Power over Ethernet on any port somewhat spoils what would be a slam dunk for use with surveillance cameras and access points. For example, it has the throughput to get the claimed speeds from modern Wi-Fi 6 access points. This makes the MG-108 (or it’s 5-port counterpart) a good choice for these use cases, though any access points would need to be powered separately.

The demand for faster wired networking will only continue to grow. Zyxel’s MG-108 should be at the top of the list for any customer tempted to give their local small or home office network a long-overdue speed boost.