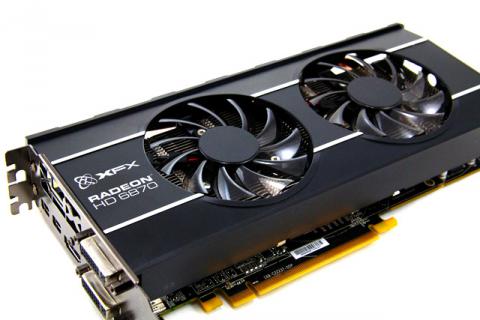 The XFX Dual-Fan HD 6870 is one of the quietest video cards I’ve seen in a long time. Even at full 100% fan speed the card was subjectively quieter than the reference HD 6870 card was at normal operating speeds. By Elric Phares
Tweet

The Barts XT chip has 1120 Stream Processors split into 14 SIMD engines each with 16 SPs capable of doing a 5D operation in a single clock.  The SP can do four simple and one medium operation each clock. You might notice that the 6870 has less SP than a HD 5870 or HD 5850, but that is because the replacement for those cards is the 6970 and 6950, not this card.

The Radeon HD 6870 has a feature called AMD PowerPlay technology. Just as the CPU doesn’t need to run at full speed 100% of the time, the graphics card also doesn’t need all of the power required under the TDP all of the time. With PowerPlay the HD 6870 only takes a maximum of 19W at idle, compared to the 151W under full load. If you don’t need the power you can save a lot on energy costs.

When AMD launched the HD 5870 in 2009, they touted the ability of the card to do 3-monitor gaming on a single card regardless of the cost. They also released an Eyefinity 6 version of the HD 5870 which allowed up to six monitor gaming from a single card but required six mini-DisplayPort connections to use all six monitors. With the launch of the Barts chips, AMD has taken it a step further by allowing up to six monitors to be used with a MST hub.

AMD has supported DirectX 11 since its inception in 2009. DirectX 11 brings solid features like Tessellation support, Multi-threaded support, and support for DirectCompute 11 to AMD’s graphics cards. Tessellation breaks up polygons into finer pieces. The easiest way to think about it is if you take a square and cut it across the diagonal, forming two triangles. You haven’t actually changed the data but can make coarse models smoother. Once you apply displacement mapping you can come up with much more realistic characters and terrain. A perfect example of Tessellation occurs in HAWX2 where the mountains and valleys all have higher degrees of detail with it enabled (up to 1.5 million polygons/second).

Staying Secure Amid the Uncertainty
SMB Books moving to a new site: Get your downloads now!
END_OF_DOCUMENT_TOKEN_TO_BE_REPLACED