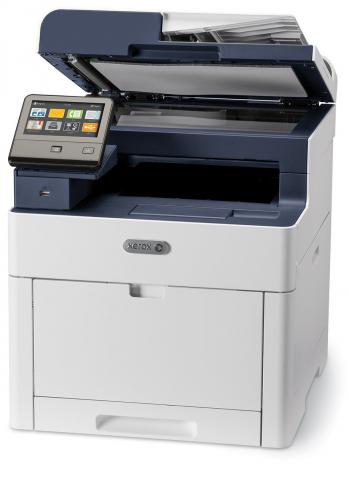 With impressive printed text, graphics, and images, this color laser MFP would be a solid addition to any workgroup.

WHEN YOU DECIDE TO BUY a color laser printer, heavy expectations come in that box alongside the printer. To amortize the purchase, you want many people to use that unit. You also want it to scan accurately with detail to reproduce as close to the original as possible. Copies should be exact. And if you select the WorkCentre 6515/DN color laser multifunction printer from Norwalk, Conn.-based Xerox Corp., all of these expectations will be surpassed.

All of the MFPs rated to print thousands of pages per month are fairly big. The WorkCentre 6515/DN isn’t the largest we have in the lab right now, but it’s the heaviest by far.

The specs say it weighs darn near 68 pounds, and it took two of us to awkwardly wrestle it out of the box and onto a table. Guess four laser drums and the machinery to keep them registered for quality printing require some heft, especially since the printer is rated for a recommended 3,000 pages per month but can handle up to 50,000 pages in that time period.

Once on the table, the mostly white printer with dark blue accents and black touchscreen module looks ready for just about any imaging project you can throw at it. We received a hand-labeled DVD of drivers, probably because it was a review unit. Good thing, since the drivers from the support page at Xerox didn’t work on the Acer Swift 7 Ultrabook we were testing, but the printer had barely been released when we tried. There were no additional applications on our disk or mentioned in the Installation Guide. All other reference material is online.

Setting up client printing was a snap: With the drivers installed and the 6515/DN plugged into the network, we just picked the printer from the list Windows provides and we got pages. (Many operating systems are supported, including Mac OS and multiple Linux variants, and even IBM AIX and HP-UX.) When the unit is warmed up, the page appears in about a dozen seconds. When on standby just over double that, which is good for a laser from a cold start.

Setting up scanning to computers and network folders took some work and a search through the 326-page User Guide. While the printer’s DHCP (Dynamic Host Configuration Protocol) client worked great, it seemed to have issues with our SMB networking setup. Turns out we had to configure a local computer drive directory as a file destination, which then allowed the scan function to send results to our NAS shared drive. Odd, but once configured, it worked quickly and reliably.

It was straightforward to set up the network connections. One nice feature: Unlike many printers in this class, the Xerox 6515/DN can communicate over Ethernet and Wi-Fi at the same time. USB to one client is available, of course, as is Wi-Fi Direct and NFC (near field communication). On the 6515/DN, the Wi-Fi module is an option but Xerox sent one with our test unit.

What most printers call functions Xerox calls apps, and they can be accessed and controlled through the 5-inch color touchscreen on the printer. The “Log In” icon on the top left is serious: Xerox, deep into corporate print management, has more tracking chops than most of its competitors. Guests can easily print without a login, but advanced functions or setting changes require authentication.

Xerox doesn’t include scanning software, so we tried Nuance’s PaperPort 14 since we have used it successfully with other MFPs and scanners. The software easily found the printer on the network and loaded Xerox support with no problem. All the standard scanning controls are right up front in PaperPort. When we configured the scan-to-folder app to send scans to the PaperPort directory, they appeared immediately. Initiating scans from the network printer means only one trip—take the material to scan, tell the 6515 to send it to a predefined network directory, hit the button, then take the material back to your desk. The results will be waiting for you.

Output is fast, crisp, and bright. Full-page color test prints show consistent color with minimal striping. Photos look better from this printer than any other we’ve tested, even on plain paper. Text is so sharp it looks like it came from an offset press.

Companies drawn to Xerox printers generally need more control over the process than other businesses that buy less-advanced systems. The client print properties page is one area where you see that extra control and ease of configuration. Normal print, or secure? Personal print to be released when you enter a code? Easy. Want to use Earth Smart mode, or maybe add a Draft watermark? Click the Saved Settings drop down and make your choice.

Document options abound under Printer Properties as well. Need four pages per sheet? 16? Booklet layout? How about a custom watermark? No problem. You can even adjust colors for a single printed page.

Duplex printing and scanning works as fast on this printer as any we’ve seen. Printing on both sides on some printers makes us nervous with all the sounds of paper shuffling, but the 6515/DN soothed our fears with quick and quiet duplex operations.

Companies that care about output, especially in color, will find the Xerox WorkCentre 6515/DN a reliable and flexible tool for all their printing, copying, and scanning needs. Only companies that demand quality output shop for color lasers because they sit on the high end of the printer price list. Those in this market, however, owe it to themselves to test this printer or one of the others in the 6515 family before making a decision.

We found the Xerox WorkCentre 6515/DN model to be solid, relatively quiet, and simple for users once configured. Printed text, graphics, and images always impressed.

ChannelPro 5 Minute Roundup for the Week of August 8th, 2022
END_OF_DOCUMENT_TOKEN_TO_BE_REPLACED