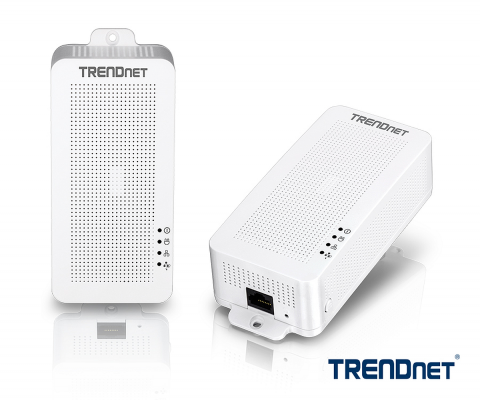 SOMETIMES YOU NEED TO RUN an Ethernet connection to places that are difficult or almost impossible to reach. Sometimes you also need a Power over Ethernet (PoE) drop in one of those nearly impossible-to-reach places. With those occasions in mind, TRENDnet, headquartered in Torrance, Calif., has put together a family of powerline (Ethernet over AC power cables in the wall) products that includes Ethernet ports, high-speed Wi-Fi, and even powerline PoE devices.

Powerline, or HomePlug (IEEE specification 1901), originated back in 2001. Speeds started in turtle territory, but have consistently gotten better. The caveat? Powerline speeds vary greatly with distance and interference. TRENDnet says the Powerline 1200 adapter can funnel a total of 1,200 Mbps from the powerline and Wi-Fi clients over to the main network router across up to 300 meters of AC lines. Your mileage may (most certainly) vary.

To keep things in the family, we connected to the TRENDnet AC2600 router we reviewed in December 2017.

The TRENDnet Powerline 1200 (TPL-421E) headend includes a single Ethernet port. Plug the unit into an electrical socket and connect a patch cable from your data network to the Powerline 1200. There are no configuration options on this unit, but it does have a handy AC passthrough socket, so homes and offices with too-few power plugs won’t lose one at this connection.

Two of the three LEDs on the unit (Power and Ethernet) will light up. One shows the power is on and one blinks with Ethernet traffic. The last one lights up when it connects to a client adapter.

We plugged a TPL-430AP into another AC socket. After a moment, the link between the headend and the access point connected and stabilized. Appropriate LEDs on each unit lit up (Ethernet on the 421E, Data on the 430AP). Clients connected through the three included gigabit Ethernet ports sped across the AC lines to the data network through the link to the router.

Many companies make HomePlug pairs to support remote Ethernet clients across power lines. Few make something like the TPL-430AP that adds a Wi-Fi access point to a HomePlug device.

As a Wi-Fi access point, the TPL-430AP’s Wi-Fi settings look much like those on the TRENDnet AC2600 Wi-Fi router. The admin utility can be configured via an Ethernet cable to one of the three ports. You can accept the default SSID name and WPA2-PSK password (each TPL-430AP has a unique name and password) or provide your own. We tested it both ways. You can clone a router’s Wi-Fi setup by pressing the Wi-Fi Protected Setup (WPS) button on the router and the Sync button on the TPL-430AP within two minutes. Within a few seconds, the access point loaded the SSID and password information from the router and worked like any other access point.