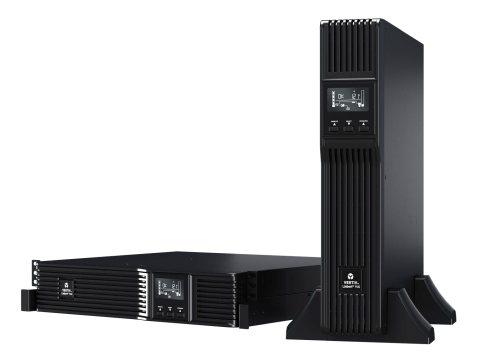 With compelling improvements in weight, power, recovery, and service life, the new lithium-ion-based UPS from Vertiv will keep the lights on while providing ROI for channel pros and their customers. By Matt Whitlock
Tweet

The PSI5 sports an all-black color scheme that will fit in any data center. It’s metal all the way around with the exception of the plastic front cover, which has a horizontal slotted/vented look. Offset from the center is a monochrome LCD screen with three buttons underneath that can be physically rotated 90 degrees for horizontal or vertical before attaching the front cover. The screen allows the user to see the basics like current load, input and output voltages, battery level, etc.

There are six outlets on the back; three are always on and three are programmable (Figure 1). There is also a USB port for local use, EPO (Emergency Power Off) connector, two RJ-45 connectors for network surge protection, and a slot for an optional SNMP card.

Should the battery need to be serviced or replaced, it is easily accessible from behind the front panel.

How long a UPS will be able to keep things running varies on the amount of load (Figure 2). Vertiv claims it can run for 7.5 minutes at full load, and nearly 18 minutes at half-load. In our testing, we simulated a power event with an approximate 50% and 80% load, stopping the test when the UPS indicated 10% power remaining. Recovery (recharge) time is also a critical data point, so we noted how long it took to reach specific points in the charging cycle. We repeated the test numerous times and averaged the results. It is important to point out, however, that UPS performance will change as the batteries are cycled and age.

In our simulated power loss, the PSI5 flawlessly switched over to internal battery and was able to carry an 80% (1100W approximate) load to 10% capacity for 8 minutes and 12 seconds. At 50% load, we averaged 15 minutes and 22 seconds. Those runtime numbers line up well with Vertiv’s claims, which isn’t surprising.

One of the biggest performance benefits to lithium-ion is the recovery (recharge) time. The faster it can get those cells charged, the sooner it is ready to handle additional power events. From our 10% starting point, the PSI5 was back to 20% in less than 10 minutes, hit 50% in 36 minutes, and was back to full capacity an average of 90 minutes later. That is significantly faster than lead-acid solutions.

The base model includes no networking, monitoring, or management capabilities, but these functions can be enabled via an add-in card. If you do any kind of remote monitoring and management for your customers, consider the IntelliSlot Unity SNMP network card a must-have (Figure 3).

There is a web interface when directly connecting over the network. Within it you can see detailed information about status, alerts, logs, and load. You can control output functions, reboot outlets, adjust a variety of settings, set protocols and various alerts, and more. The interface is basic and somewhat tedious given the number of levels and sublevels, but it’s functional and quick once you know where to look.