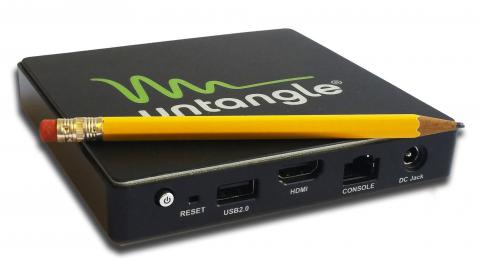 The u25w box may be small at 5 inches square, but it packs in a fairly impressive list of features and functionality. By James E. Gaskin
Tweet

Untangle Inc. started in 2003 with an unusual business model: The company, based in San Jose, Calif., sold software that turned a PC with two Ethernet ports into a pretty decent gateway. Since then, Untangle’s customers have grown to more than 400,000 while the hardware has changed from old PC to custom appliance, and now to “the smallest security appliance” on the market, the u25. We tested the u25W that adds Wi-Fi.

The u25 appliance is the smallest in Untangle’s catalog, which includes u50, u150, u500, m1500, and m3000 models. The numbers tell how many users each device will support, so you can see that Untangle now covers the midmarket as well as small businesses. But the u25 box is far smaller than comparable small office/home office routers.

And small it certainly is. At 5 inches square it’s about the size of one slice of Texas Toast. Yet it still has room for three gigabit Ethernet ports, one USB 2.0 and one USB 3.0 port, a full-size HDMI port, and a console port. Oh, and a tiny on/off button that lights up (dimly) to show that the unit is on.

The power button, power plug, HDMI, USB 2.0, console port, and reset button are on the front. One might expect the connector from the petite power brick to plug into the back of the unit, along with the three Ethernet ports, antenna connector, and USB 3.0 port, but these tiny boxes dictate the design. One might expect the documentation to better match the box as well—for example, the instructions say eth0, eth1, and eth2, but the appliance is labeled LAN1, LAN2, and LAN3. There is mention of a VGA port, making us think the documentation department needs to wake up and smell the HDMI port. These minor details won’t confuse experienced techs, but aren’t firewalls all about details?

Untangle likes to advertise that its boxes are “powerful yet simple.” For the most part, the u25w meets that goal, which is fairly impressive since the box has full unified threat management (UTM) capabilities with the latest next-generation firewall release, version 12. An Intel Atom processor with 2GB RAM and a 32GB SSD power the unit well enough. Some administrative screens take a few seconds to update, but traffic always flowed at full speed.

Rather than plugging in an HDMI monitor, keyboard, and mouse, we plugged a laptop into one Ethernet port and connected our ISP-provided modem into another port. The operating system loaded more quickly on the Untangle u25w than on our laptop, so the router was ready to configure as soon as our Windows boot music chimed.

The default IP address of 192.168.2.1, rather than .1.1, kept the u25w separate from the ISP’s modem. When the laptop booted, the u25w’s DHCP (dynamic host configuration protocol) server gave an address (.2.88) and the laptop was surfing. Yes, it was that easy for basic configuration with a single client. “Powerful yet simple” fits.

Configuration steps come after you register for an Untangle account by providing your company name, an email address, and a password. The box doesn’t say you can’t configure anything without a cloud connection, but it’s the rare device that doesn’t demand a cloud hook anymore.