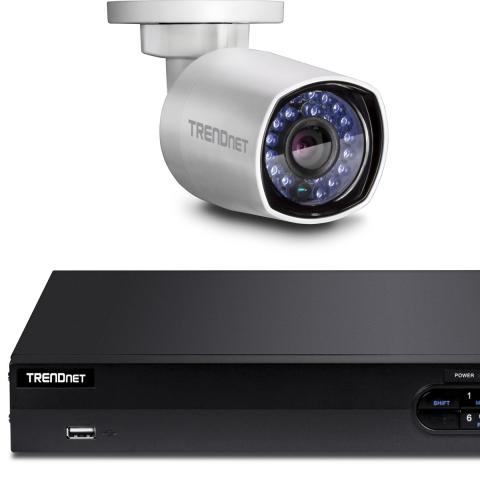 With a 2TB hard drive and connections to eight cameras, this NVR protects customers from outsiders and insiders at a price that won’t bust the budget. By James E. Gaskin
Tweet

NEXT TIME YOU RUN POE CABLES to power VoIP desk phones or Wi-Fi access points, think visually. In other words, run some PoE cables to good locations for surveillance cameras. All the new ones run over TCP/IP, so you needn’t worry about jumping into the swamp of video networking standards. But you will need to worry about the network video recorder that connects all the cameras to the hard disk for recording. Try the TV-NVR208D2 from Torrance, Calif.-based networking and surveillance provider TRENDnet if you need an easy way to deliver up to eight channels of simultaneous surveillance without busting the budget.

Sized like a mini 1U server, the TV-NVR208D2 is the same as the 208 with the addition of a 2TB, 3.5-inch hard drive. There are two drive bays that support up to 12TB with optional drives for those who roll their own systems. Other models have four drive bays supporting 24TB of storage.

The box includes the NVR unit, a mouse, Ethernet and HDMI cables, mounting brackets and screws, a Quick Installation Guide in five languages, and a mini CD with the complete User’s Guide. Why a mouse? Because the box has VGA and HDMI ports to power an external monitor. You need that to set up the system initially, and for a few tweaks later, even after you establish a web browser session to the unit for monitoring.

TRENDnet included two of its cameras, the 1.4-megapixel TV-IP320IP and the 4MP TV-IP314PI, to help our testing. Both are rated for outdoor use and have a feel and heft that says they will last, unlike those included with Big Box store surveillance systems sold to consumers. People we know who bought those replaced all their cameras within two months. We doubt that will be an issue here. But if you do replace them, you’ll want to use other TRENDnet cameras since those are auto-recognized. The TV-IP314PI unit includes zoom capability.

Our cameras both have infrared capabilities. Office images in infrared were odd looking but as sharp and clear as the lighted videos. Other TRENDnet models can pan, tilt, zoom, and record and transmit audio.

We skipped the drive installation steps and plugged in an external VGA monitor (there’s an HDMI port as well). Then we initiated the drive, which went quickly. We set the language (choices were English, German, French, Spanish, and Portuguese), admin password (via the clumsy cursor keyboard), time zone, and date and time. Unfortunately, you’ll have to leave the monitor plugged in to change some settings even after establishing a network connection.

That network connection took time. The plan was to connect the NVR-208D2 to our network via the LAN interface, log in via the recommended Internet Explorer, and download an .EXE file stored on the NVR for the admin interface. Unfortunately, security certificate problems blocked the software on three Windows 10 systems. We were able to bypass those issues on a Windows 7 laptop.

Once connected, the admin screen worked well, but some configuration and monitoring still requires that the monitor be plugged into the NVR. If the camera supports pan, tilt, and zoom, you can control everything over the network as well as the monitor.

If you’re not used to video surveillance, things may seem strange at first. You can’t get motion detection to trigger recording until you define the area to watch. For this purpose, TRENDnet slices the area you define into a 22 x 15 grid, allowing excellent granularity. Between that and sensitivity settings, you can capture exactly what you want and no more, saving disk space.

Playback can be done from the monitor or admin screen, using some interesting controls to search over time. The fast-forward settings only go 2x and 4x normal time, not nearly enough when searching over several hours. However, you can grab and move the time line on the blue bar and zoom through time, forward and backward. The blue line is continuous recording. Events such as motion-detected initiated recordings are in red.

Yes, network video uses IP cameras and video servers familiar to all data folks. But the world of video remains a different place that will take some exploring. The network part of this recorder from TRENDnet, long a supplier to the community, will be familiar, including the IPv6 support. But the video parts will take some time to master. The right frame frequency and bit-rate settings can collect usable video without overwhelming your network connections. New to data people will be decisions on image formats, main or substream video feeds, and alarm handling. TCP, UDP, and Multicast are familiar, but used in new ways.

That said, MSPs and resellers can offer something useful to their clients—surveillance—without spending much money. Remote viewing and playback over a VPN connection could protect customers from outsiders and incompetent insiders. A few dollars per month per camera would be a good deal for customers, and the TRENDnet TV-NVR208D2 or another member of the product line would be a good place to start.

ChannelPro Weekly Podcast: Episode #235 - Greetings from the New Hampshire Chamber of Commerce
8 Best Hacking Training Courses to Boost your IT Career
10 Things You May Have Missed at ChannelCon 2022
END_OF_DOCUMENT_TOKEN_TO_BE_REPLACED