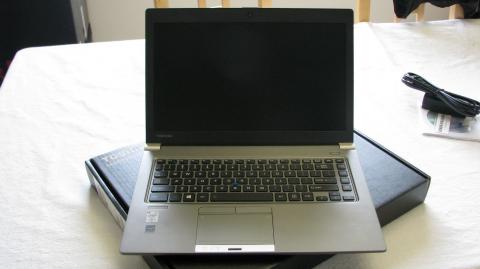 TOSHIBA AMERICA INC. has been producing excellent notebook PCs for as long as I can remember. In fact, one of the oldest notebooks in my collection was state of the art when Windows 3.11 for Workgroups hit the scene. In the United States, though, the company generally is not the first OEM people think of for SMB PCs, being outshined by the likes of HP, Dell, and Lenovo. What exactly keeps Toshiba behind the other major PC makers? The answer lies within the Tecra Z40.

Notebooks destined for the SMB channel are rarely built to be attractive, often resulting in thicker, bulkier designs made to withstand the rigors of day-to-day business. Times are changing, though, and even modern-day office notebooks have started to trim the fat. The Tecra Z40 isn’t the thinnest notebook in the midsize, business-class market, but at 0.8 inches thick and with a weight of 3 lbs., 6.3 oz., it won’t feel overly bulky in a backpack or bag.

Some of the extra height comes from Toshiba’s fiberglass-reinforced “Honeycomb” grid construction, which is said to increase durability. It doesn’t appear to be snake oil; the notebook base feels extremely rigid, especially when compared with Toshiba’s thin and light Portégé Z930. The screen exhibits a bit of flex when the lid is opened and closed from the sides, but it is well within the norm for thinner notebooks. 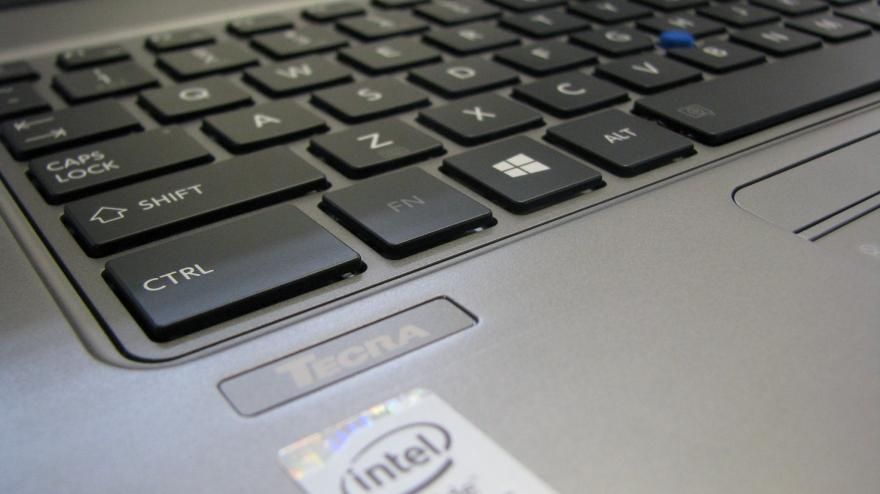 Toshiba calls the outer finish “Cosmos Silver,” although there’s nothing space-age about it (Figure 1). It’s basically dark gray with bright silver accents at the hinge and just below the trackpad. There is a rough feel to it that enables a solid grip when it’s carried around, and it doesn’t smudge or show fingerprints as readily as others. It looks good, although hardly out of this world.

The Z40 I received is the B1410, which is one of Toshiba’s quick-ship models, running Windows 7 (via downgrade rights from Windows 8). Lurking inside is Intel’s latest mobile Core i5-5300U with vPro and Intel HD 5500 graphics core, combined with 8GB of DDR3L RAM. There’s a 500GB 7,200 rpm SATA handling storage tasks, a 14-inch display, Intel Dual-Band Wireless AC NIC, and Bluetooth 4.0. Input is handled by a chiclet-style keyboard as well as a multitouch trackpad and trackpoint. 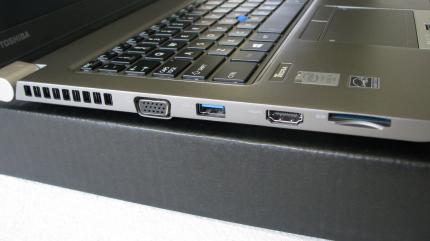 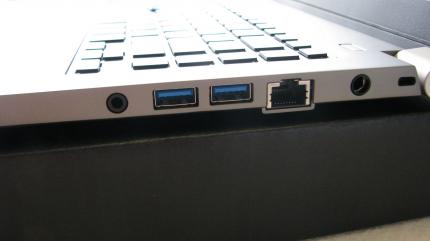 Looking around the unit you’ll find two USB 3.0 inputs, LAN, headphone, power, and lock-port on the right (Figure 2), as well as an additional USB 3.0 (with charging capabilities), HDMI, VGA, and an SD card reader on the left (Figure 3). 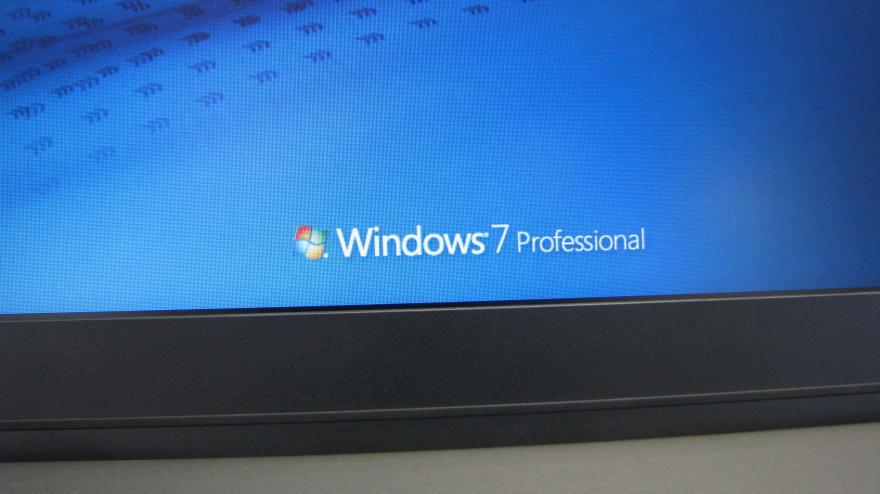 The display is disappointing. The Tecra’s 14-inch TFT screen with LED backlight has a low, 1366 x 768 resolution that isn’t on par with other notebooks in its class. Brightness drops significantly when you move off to the sides (Figure 4), and even using the brightest setting you would be hard pressed to see the screen when outdoors. Color reproduction is average, but certainly adequate for productivity work, Web surfing, and videos.

Compared with the many mobile devices with solid-state storage I’ve used this past year, the Tecra Z40’s hard drive, of the spinning 7,200 rpm variety, showed a noticeable drop in performance. The hard drive offers plenty of capacity, and even though it performs well for a traditional HDD, it can’t match the IO capability of an SSD.

Running Windows 7 doesn’t help in the start-up/shutdown department, one of the areas in which Windows 8 saw dramatic improvements. Booting up took 59.5 seconds from power button to desktop, which is four to five times longer than a Windows 8 machine running an SSD. Shutdown is a 20.5-second operation, while resuming from standby (not hibernation) took about half that. 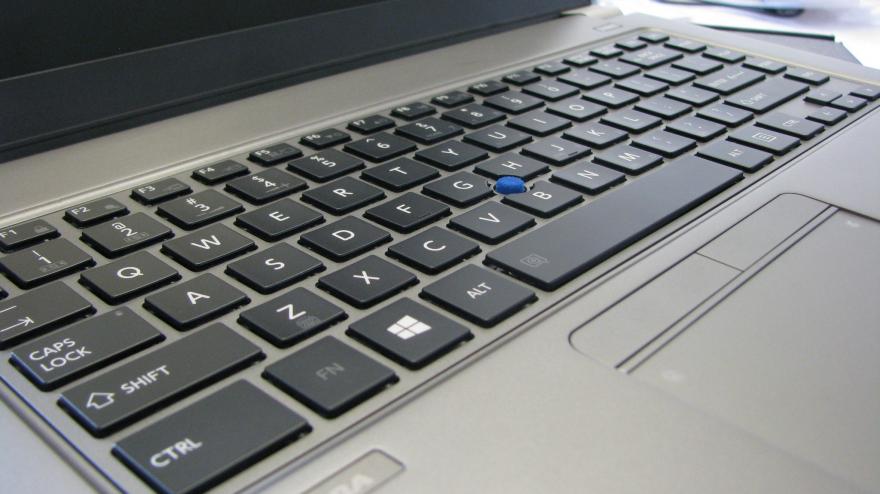 I was moderately impressed with the keyboard and trackpad setup on the Tecra Z40 (Figure 5). The keyboard itself is a chiclet-style grid, common on thin and light notebooks these days, with five rows of keys. The typing experience is pleasant, thanks in part to the rigid base that doesn’t flex when typing. There isn’t a lot of key travel, but what travel there is can be activated by just the right amount of pressure.

Trackpads on PC notebooks often disappoint, even on many other Toshiba models. However, this one is a notch above the norm (Figure 6). The tracking area isn’t as massive as some notebooks, so it is mostly out of the way when typing. But users with gorilla-size wrists will find that turning the trackpad off to avoid accidentally brushing against it is a simple, two-touch affair in the upper-left corner of the tracking surface. The upper-right corner performs a similar function when touched twice, only it enables or disables the notebook’s “eco” mode. The fact that it’s a multitouch trackpad won’t buy you much functionality with Windows 7, but when upgraded to Windows 8 or Windows 10 down the road, it swings to life with gestures and other features. 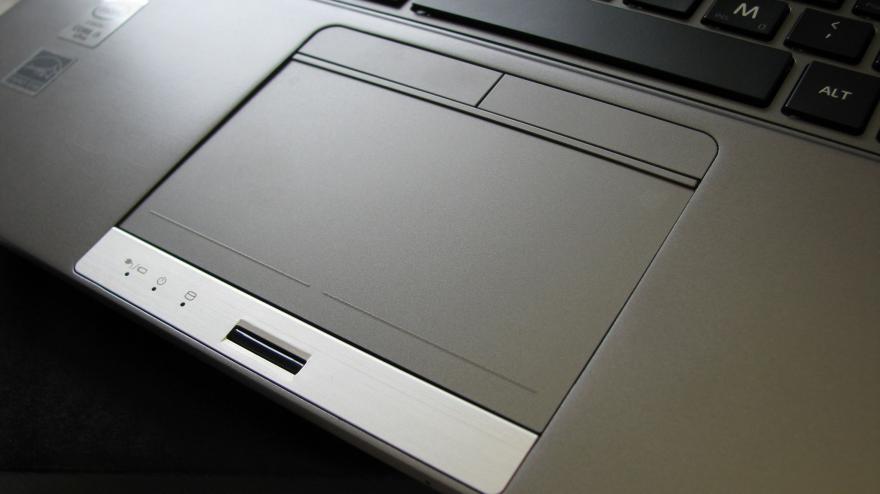 Business users who enjoy a pointing nub in the middle of the keyboard will be pleased to know the one here does an admirable job of whipping that arrow around the desktop. They will find, however, that the corresponding left and right buttons slightly recessed above the trackpad are too thin and difficult to press.

Intel’s i5-5300U processor provides plenty of pep for a multitude of office and productivity tasks. Expect a wait for those heavier programs to launch because of the HDD, but once going you can have several Web browsers open with a multitude of programs active, and computing with the Tecra Z40 will remain a pleasant experience.

Dusting off my copy of PCMark 7, a Windows PC benchmark tool, the Tecra scored a solid 2696. Prime95’s benchmark gave a best time of 33.633 ms for the 8192 FFT length when both cores were going with four threads. The notebook’s 8GB of DDR3 RAM is the right number today for a high-workload user desktop, but it is upgradeable to 16GB if needed.

Integrated graphics performance has made significant strides in recent years, and the HD 5500 performs well for a productivity machine. It can handle 3D gaming at the native 1366 x 768 resolution with things like anti-aliasing, and fidelity tuned to more modest settings. Casual games and Minecraft, when not loaded up with crazy mods, will run at acceptable quality and frame rate.

When you’re on the go, battery life is one of the most important metrics. The Tecra Z40 ships with a 60Wh four-cell Lithium-ion battery, beefy given the ultra-low-power internals. At idle, the notebook I used consumed about 5 watts, while chewing around 26 when working through Prime95’s torture test. The low-res, fairly dim display doesn’t use up much power, but replacing the hard drive for an SSD and running a modern version of Windows would knock down the idle draw some.

I was able to work a little more than eight hours with multiple office and Web applications running. Your mileage will vary depending on workload, but most users can expect to get through the day or a long flight without plugging in.

I mentioned that the Tecra Z40 is indicative of why Toshiba is often left behind by HP, Dell, and Lenovo. The $1,229 notebook is not a bad PC; it’s even very good with respect to build quality and battery life. However, putting a decent processor into a rigid chassis does not a premium notebook make. The low-res display is unacceptable at this price point, and I would expect better storage, a slimmer profile, and a few ounces shaved off the weight. It’s the value proposition, which, unfortunately, is not in the favor of the Tecra Z40 model I received.