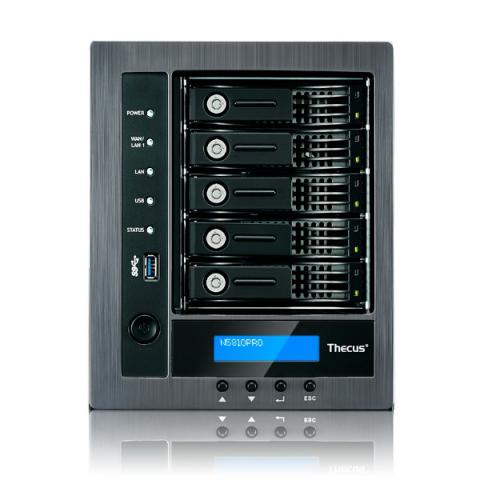 With terabytes of storage and a huge variety of applications, a small business could easily run its front- and back-office operations from one of these boxes. By James E. Gaskin
Tweet

We have a fondness for NAS appliances, especially when they help delay the purchase of a full Windows Server system and all those ongoing costs that burden many small businesses. So the Thecus N5810PRO from Thecus Technology Corp. hit our hot buttons as a way to provide many terabytes of storage while including a huge variety of applications. Many a small business could run its front- and back-office operations from one of these boxes.

Interesting twist? This NAS (network-attached storage) comes with its own internal UPS. Slide it into the chassis like an extra power supply and you have an internal battery backup. Of course, best practice is always to put shared storage on a UPS as a matter of course, but this is the first NAS appliance that brings its own battery backup to the party.

A little larger than the typical NAS, the N5810PRO has space for five disks, not just four. Our unit came with three 4TB disks. We configured them as a RAID 5 system, leaving 7.447GB of open space. If one disk fails, our 7.4TB of data remains safe and sound. The Quick RAID formatting option handled the chore in just a few minutes, much faster than we've seen in other RAID configurations.

Using the Thecus Setup Wizard software, it takes little time to find the N5810PRO on your network, connect, set your network preference (Dynamic Host Configuration Protocol pulls random available addresses with each login so we prefer giving storage appliances a static IP address), change the default admin password, then switch to a browser for further management.

Five Gigabit Ethernet ports are on the back. One is labeled WAN/LAN, so if you want to make this box a VPN client or server or run a Web server you can do it easily. Ports can be load balanced for higher throughput or set up as failover.

When you login through your browser the Home screen appears. It’s a nice mix of friendly icons on the right and drop-down menus on the left. Each of the icons opens one of the drop-down menu options that look like a typical admin management screen. For some reason, iTunes servers appear on almost every NAS appliance (do we thank or blame Apple marketing?). 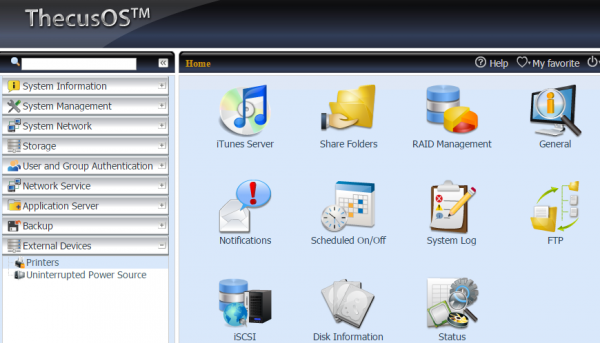 To start with something more useful, try the second icon on the Home screen, Share Folders. There you can set up your storage directory hierarchy as needed. Want to set quotas on folders? Done. Set them public or private? Done.

Want to set up some users? If you have an Active Directory going, you can integrate the N5810PRO into that tree. LDAP (Lightweight Directory Access Protocol) type of company? Same thing, just fold them in by pointing to the LDAP server. Need to batch load a long list of user names and passwords? Easy enough, although making that list always becomes more trouble than you might think.

In little or no time, you'll have a working NAS with as much storage as any small business or department will ever need. Remember, there are five disk slots, and 6TB drives get cheaper every day. Storage won't be a problem, and if somehow it becomes one, check out Thecus' NAS stacking tricks. Or make the box an iSCSI target for a larger server.

Until you get some programs, the Thecus N5810PRO is just storage space. Click the link for the Thecus App Center on the Application Server > Manual App Installation page, and your eyes, like ours did, will widen considerably. 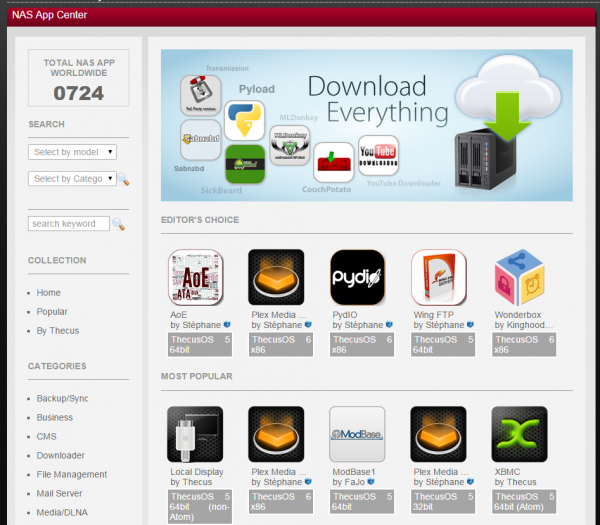 At first glance, it appears there are hundreds of programs available. That's not exactly true, since many programs exist in different versions for different Thecus NAS boxes. Some units have Intel Atom processors, some have Intel Celeron (our model), and so on. But there are plenty of app choices for all models.

Every time a customer adds storage space you add the same amount of backup space, right? Then you'll love the five pages of backup/sync tools, the first entry in the menu listing. Only a page and a half of backup/sync apps were listed for the N5810PRO model, but those include Dropbox, Elephant Drive, BackupPC, Evault, Syncrify, Rsync, and more.

A baker's dozen of categories are listed. Business tools include multiple CRMs, ERP, collaboration tools, and even file and disk encryption. CMS fans will find Joomla, WordPress, Drupal, and Moodle, along with multiple others. Mail servers abound, as do media players, photo servers, and Web servers such as Apache with multiple supporting SQL options. Security admins can choose from multiple anti-virus tools, VPN, firewalls, and even software that manages your IP surveillance cameras.

Need a basic dumb box of shared storage with some disk redundancy? There are cheaper options, although this box holds a lot of disks and offers good performance thanks to an Intel Celeron processor with 4GB of RAM. Need an application server to run a small business, or maybe a sales department with a dedicated CRM server in a larger company? And want to keep the budget far below that of a Windows Server and all the trimmings? Then check out a Thecus N5810PRO. It will do more than you expect.

The Intersection of Hybrid Cloud and Identity
END_OF_DOCUMENT_TOKEN_TO_BE_REPLACED

Jabra PanaCast Review - Get Your Huddle On
END_OF_DOCUMENT_TOKEN_TO_BE_REPLACED