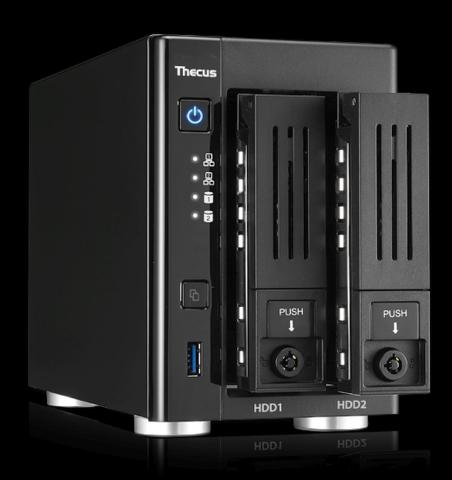 This inexpensive NAS “tower” accepts a range of drive types and capacities, making it easy and cost effective to turn spare drives into an excellent SMB storage system. By James E. Gaskin
Tweet

The N2810 comes in a decent but not flashy retail box, and arrived without disks. A large, colorful, and folded Quick Installation Guide shows pictures and short instructions in 11 languages.

We picked two Seagate 2TB drives, snapped them into the drive trays, and they slid into the unit and latched securely. Adding your own drives makes it easier to choose the storage size you want, or to use extra drives you have available.

Storage can be configured as either one large storage pool combining the capacity of each disk, or mirrored in RAID 1, which we chose. Configuring RAID arrays used to take enough time that we always started the process either before lunch or at the end of the day. The Thecus N2810’s Quick RAID format option took care of drive configuration in less time than it took to refill our coffee mugs.

The NAS booted and started with a static IP address of 192.168.1.100. Hard for vendors to know the right approach here: If they set a static address, like Thecus did, the existing LAN numbering may not match. If they let the box request a client IP address from the local DHCP (Dynamic Host Configuration Protocol) server, it takes more work to find and change the IP address settings. But we started ours up on a network with a single, unattached router, so it was simple to begin the administration program and set up the IP address the way we wanted.

The admin pages are clean but not cutesy. Drives can be set to spin down after a certain amount of inactivity, and can be encrypted. This box, though aimed at small businesses, can also be an iSCSI target.

There’s one USB 3.0 port on the front and two on the back, along with two load-sharing 1GB Ethernet ports and an eSATA plug. One might think the fan would be noisy cooling off a dual-core Celeron and two 2TB hard disks, but it was so quiet as to be inaudible, at least in a modern office setting.

Other NAS boxes offer downloadable applications to add a variety of functions, but Thecus has as many or more than most. There’s no need to add any applications for normal NAS operations, but if you want to make your N2810 box into a backup server you have a variety of options. Local, remote, and rsync backup services are built in. A one-step dump from a USB storage device into the NAS explains why one of the USB 3.0 plugs is on the front.

Those are the built-in options, including Acronis client backup software. But drill down into the App Center a bit, and you’ll find easy ways to leverage the N2810 as a front end for Microsoft OneDrive, Dropbox, Evault, CrashPlan, TeamDrive, Elephant Drive, and Amazon’s AWS S3. Need the reliability of automatic failover between two N2810s? Got it. Want some file syncing apps? Two clicks and they’re yours.

For those who care, an iTunes server is part of the default feature set. And a Kodi server, the open source media server formerly known as XBMC, is a download away for video fans.

As a good file server should be, the Thecus N2810 quickly becomes invisible. Quiet and black, only the bright blue on/off LED really catches your attention because it’s so much brighter than the green disk and LAN lights. Once turned on and added as a resource in Active Directory or LDAP, or configured directly with local user accounts like small businesses do, the performance is good enough that users don't think about the box.

And, it’s so reliable that admins don’t get called.

Thecus advertises 4K streaming support, and we certainly can’t argue. Music and videos to multiple clients stream fast and artifact-free. Once a drive is mapped to this box, the user won’t give it a second thought.

There are other ways to add inexpensive shared storage to a small business or department, but with a street price well under $300, futzing with something else for a few hours will cost more and you may have less when finished. The 2GB of RAM (upgradable to 8GB) keeps up with a few loaded applications, monitoring, and fast file service. The near-silent box disappears from earshot immediately. The physical box, smaller than a two-slice toaster, hides on a shelf or desk and works without a fuss.

Mirrored disks, even though disks are more reliable than ever, still make sense. The Thecus N2810 Linux-based NAS “tower” accepts a wide range of drive types and capacities, making it easy and cost effective to turn some spare drives into an excellent departmental or small business shared storage system.

ChannelPro 5 Minute Roundup for the Week of April 5th, 2021
END_OF_DOCUMENT_TOKEN_TO_BE_REPLACED

Jabra PanaCast Review - Get Your Huddle On
END_OF_DOCUMENT_TOKEN_TO_BE_REPLACED