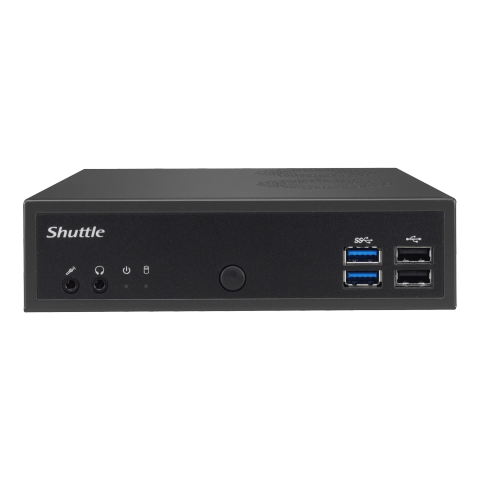 This lightweight device is suited for screen-heavy applications like digital signage and surveillance, or general computing users who want multiple screens. By James E. Gaskin
Tweet

SHUTTLE IS A BIG NAME in small PCs. Some of the vendor’s products keep the old shoebox form factor, but the XPC slim line of offerings, like the DH02U we tested, are smaller than a hardcover book. And while other Shuttle models offer general-purpose computing platforms in very small form factors, this series aims at screen-heavy applications like digital signage and surveillance. However, with a 7th generation Intel Core processor and plenty of memory (our test unit had an Intel i7 and 16GB RAM), this box makes sense for general computing users who want multiple screens for any reason.

This was an out-of-small-box experience, as you would expect with a 1.3-liter PC chassis. While many Shuttles are sold as barebones units through distributors, our test unit came fully loaded.

The power brick, however, is darn near as big as a regular brick. Since this unit can power four high-resolution monitors, it needs some juice. There’s a DVD of drivers we didn’t need, some mounting hardware (VESA for mounting on monitors, etc.), screws, and two short Wi-Fi antennas. Besides the Wi-Fi (which we used most of the time), there’s a gigabit Ethernet port. If you want to go old-school, there’s an RS-232 serial port.

There’s also a bunch of USB ports. There are four on the front, split evenly between USB 2.0 and USB 3.0. Two more USB 3.0 ports are on the back. Audio-in and -out ports, 3.5 mm as with all PCs, are on the front, along with power and disk activity lights and the on/off switch.

Our eval box had the Core i7-7500U (Kaby Lake) processor. The mobile-friendly chip runs at 2.7 GHz while safely boosting to 2.9 GHz. The 16GB RAM sped us along, as did the WD Green PC SSD 120GB disk with almost 90GB open. There are no general office applications that can make this unit break a digital sweat.

An NVIDIA GeForce GTX 1050 graphics board powers the four HDMI HD ports. It’s High-bandwidth Digital Content Protection (HDCP) capable and has more color controls than you get with even the best built-in Intel graphics we’ve seen. The box also has Bluetooth support, which could come in handy in some situations.