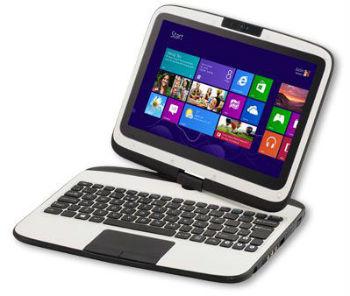 Three years ago, schools couldn't get enough rugged yet affordable laptops. Today, it’s all about tablets. So Equus has upgraded its Nobi laptop-tablet-ruggedized school computer to version 3 with Windows 8 Pro 10-point touch, while keeping the price in the $500 to $600 range. By James E. Gaskin
Tweet

Schools of all types, from pre-kindergarten to college, can't get enough tablets lately. Three years ago, they couldn't get enough rugged yet affordable laptops. So Equus Computer Systems has upgraded its Nobi laptop slash tablet slash ruggedized school computer to version 3 with the Windows 8 Pro, 64-bit operating system and a 10-inch, multitouch display. And somehow Equus has managed to keep the price in the $500 to $600 range.

The v3 won't break any speed records, mainly because it comes with an Intel Celeron CPU and 2GB of RAM stock (4GB is optional). Windows 8 needs more horsepower than that to perform crisply, but for the intended use of the Nobi Convertible v3, the performance is adequate. We downloaded LibreOffice and ran some modules and the system will perform well enough for general computer classes. Is this the unit to put in the video editing lab? No, even if it does have an HDMI port.

The 10.1 inch screen (remind you of a netbook? It should) has a resolution of 1366x768, which makes some webpages painfully small for non-school age eyes. But since the Windows 8 is touch enabled, many pages (including some of those in LibreOffice) can be expanded with the two finger spread.

Built for children, the case appears to be made from military-grade plastic. The handle allows kids to carry the Nobi Convertible without need of a case. Junior high boys will likely use the handle as a convenient way to swing the Nobi at the heads of friends. Based on our playing with the system, a whacked head may get more damage than the Nobi.

Notice the stylus holding open the handle. It fits into the case on the right front, sliding in and clicking to stay in place. Whether the lanyard makes it past the first two weeks is doubtful, but at least there's a stylus to make better use of the touch screen. Too bad the Acer W3 Iconia 8 inch Windows 8 Tablet we tested recently didn't include a stylus like this.

Another cool feature is the swivel screen that easily rotates to let the included webcam cover the entire room. One could rotate the screen, adjust the camera to a new angle and try to do a videoconference, but one would be disappointed. However, for Skype or other video software, this movable camera gives more value than the fixed cameras added to many laptop lids.

The "convertible" name comes from the way the Nobi screen can turn completely around and fold flat, providing a real tablet experience. At 3.7 pounds, this tablet is not for the wanderer, but does work pretty well sitting at a desk. Remember the stylus then remember Windows Touch Support, and you will realize this 10 inch tablet costs far less than a Windows Surface Pro and can withstand the rigors of school all that much better. And has a better keyboard.

Equus' webpage mentions six "educational software applications to enhance classroom learning," but these weren't loaded on our system. But between the Windows 8 manageability, WiFi 802.11 b/g/n, and an Ethernet port, remote updating won't be a problem.

Those in the education market should take a close look at the Nobi Convertible v3. Equus works through a large number of resellers with several program options, so if you service schools you should get in touch. For that matter, at $600 or less, those of you working with field tech teams looking for a ruggedized laptop slash tablet may start a pilot project or two. Users will accept the mediocre Windows 8 performance for this rugged mobile computing device that switches from laptop to tablet in three seconds.