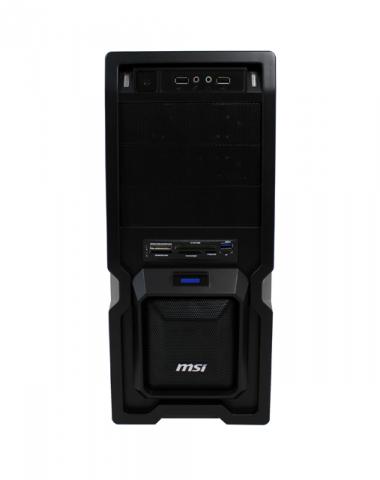 MSi is a company that has been around for quite awhile now and has a very good name in the market. This is their first foray into the PC case market business and its well priced. This Raptor is aimed at the budget minded gamer that still wants some great features and durability. By B. Ramirez
Tweet

This isn’t the prettiest case that I’ve ever seen but for 59 dollars is definitely one of the nicest looking at this price point. We’ve seen other cases at this price point that don’t look nearly as nice and don’t come with as many features.

First off, the paint job on the exterior of this case is really nice. It has a satin black finish that looks great and should complement just about any room you put it in. One thing that’s really nice about this case is that the interior is also painted in the same satin finish. The front of the case is black plastic, but it doesn’t feel as cheap as some of the other cases in this price point.

At the front of the case you’ll find your power and reset buttons. You’ll be surprised to learn which your reset button is. It took me a little bit to figure that out; more about that later. There are also two USB 2.0 ports at the top along with your audio ports for headphone and microphone. At the middle of the front panel you’ll find a multi-card reader and a USB 3.0 port. At the bottom of this panel is a 120mm blue LED fan. That button above it that looks like it would turn the LED on and off is actually your reset switch. Kind of strange, but I guess you could get used to it.

On the left side panel is where you can install up to two 120mm fans for added cooling. Smaller fans can be installed here as well. Just keep in mind that smaller fans will produce more noise to produce the same amount of airflow. These side panels do have a bit of flex to them, but nowhere nearly as much as we’ve seen from other cases in this price point. In fact, I recall a case in the 100 dollar price range with much flimsier panels than this one. Apparently MSi has been listening to what the consumers want and made sure that this case would still be sturdy even at this price point. The right side panel is totally plain and doesn’t come with any vents or fan mounts.

At the back of the case is where you’ll find that you can install your power supply and there are seven expansion slots. One impressive feature of this case is that just above the rear 120mm fan there are two holes with rubber grommets for water cooling tubes to pass through. Being that your USB 3.0 port on the front actually comes with a motherboard connection cable, you won’t need to pass any cables through these holes to connect them to the front panel of the case. At the bottom is where you’ll mount your power supply. This case also has removable dust filters at the bottom and front of the case. To get to the front filter you’ll need to remove the front panel, which isn’t hard to do at all. Just give it a quick tug at the bottom and the whole panel comes right off.

At the bottom of the case are four plastic feet and you’ll also notice that another 120mm fan can get installed here as well. This case will allow for some really good airflow if you install all of the optional fans. This case only comes with one 120mm blue LED fan at the front and a blue standard 120mm fan at the back. From what we’ve seen from installing a power supply and running the fans, they do provide a decent amount of airflow without being too noisy. The top of this case is also plain and without fan mounts or ventilation. This case is kind of on the heavier side for a mid-tower, but this is because of the sturdier material that it’s made from. This is what gives this case it’s “military class” feel and of course the overall design of the case. With that being said let’s open it up and have a look at the interior of the case.

Time for MSPs to Carry the Mantle of Leadership
END_OF_DOCUMENT_TOKEN_TO_BE_REPLACED