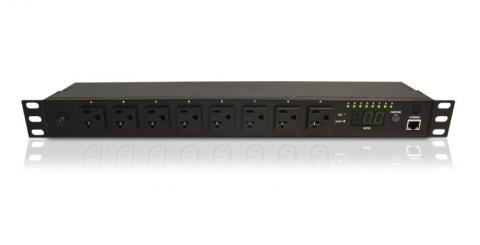 The RPM Series from Minuteman received high marks when put to the test, particularly the eight-port RPM1581HVN. By Bob Grossman
Tweet

Many moons ago, I had the privilege of working as director of product line management for what ultimately became Tyco Security Products’ video products division.

I’m not sure if other companies do this, but we used to break products into three major categories: hardware, software and “glueware.” I won’t claim that we made the latter up, but it was an apt description for products that served to hold other product lines together. Black boxes that allowed your analog pan/tilt/zoom (p/t/z) cameras to work with your competitors’ systems were glueware. And the remote power management (RPM) systems from Minuteman fit handily into that category.

The RPM Series from Minuteman is fairly extensive, ranging from an ultra-compact, two-port device to a 24-port, 70-inch power strip. Different models can include optional temperature and humidity probes as well and all are UL Listed. We tested the eight-port RPM1581HVN, abbreviated as the 1581.

The 1581’s heft tells you right away that this is more than a power strip. It is extremely rigid, solidly built, and the inside is easily accessible with a standard Philips head screwdriver. It is a 1RU or 0RU design, in that it can be mounted in a rack taking up a single rack unit (1.75 inches) or the rack ears can be installed sideways allowing the chassis to be mounted against a wall.

We like that the hole pattern is symmetrical; the rack ears can be mounted on the front or back, and with either the top or bottom of the unit against the wall. Somebody thought this out carefully.

We did take some exception to the design of the physical unit, although the reader may chalk these up to personal preference. The front panel includes eight outlets, thoughtfully labeled A-H to match up with software designations (more on that later). These receptacles use NEMA 5-15/20R connectors that will accept either 15A or 20A plugs — rather than the two parallel blades, one of the sides has a “T” shape allowing the horizontal/ vertical 20A plug to be inserted.

As this unit can only handle a total of 12A across all outlets, a 20A draw would likely be disastrous. While it isn’t likely that a 20A plug will be connected in the average rack, I know of code enforcement officials who would flag this if they noticed it. The UL Listing would likely pacify them, but it is an odd design choice.

The power connector on the rear panel is an IEC320 C20 receptacle that has three horizontal blades rather than the more common C14 with vertical blades. This is intentional, so don’t lose the supplied 10-foot power cable. The power rating on the more common plug is not sufficient for the unit. This had me scratching my head initially, saying, “Why did they use this plug?” Now I’m wondering how many other devices I’ve used that are sending more current down the C14 plug than it should be handling. Good job, Minuteman!

There is no surge protection on any of the outlets, and unplugging the unit while it is powering up could cause it to “hang” disabling some of the outlets. This is clearly noted in the manual, can be easily remedied via the included software (or a Web browser), and is not a knock on the unit in any way. The primary purpose of the 1581, and indeed all of the devices in the RPM Series, is for power distribution and remote management. Presumably this unit will be plugged into a UPS that is already handling surge protection.

At its heart, the 1581 is a device that allows you to remotely control outlets either across your LAN or, when properly configured, via the Internet. It’s not like the home automation outlets we’ve talked about in the past, though; this is industrial strength and requires some IT skills to get you beyond the basics.

For example, one of the features I liked was the unit’s ability to ping (send a signal across a network and wait for a response) up to eight separate network addresses; one per outlet. If an address does not respond after 10 attempts (each a minute apart), the 1581 will either shut off the outlet or cycle power. A delay can be built into cycling power on an individual outlet basis, so a ping to an external address (outside your network), for example, could reset your cable modem, router and network switch, turning them back on in a sequential order based on the parameters you set up.

A scheduler also allows outlets (or groups of outlets) to be turned on or off at predetermined times using a single day, an assigned weekly day or every day. Outlets may be on multiple schedule events, so you can get pretty creative. Using both ping and scheduling, you can set the unit to turn off a device when you shut down your workstation for the day, turning it on at 9 a.m. the next morning. Keep in mind that the aggregate load on this unit is only 12A so you may not wish to try this with the coffeemaker.

There’s quite a bit of customization that can be done as well. Outlets can be renamed, groups can be created and thresholds can be set for power draw. Alerts are generated for various events and these can be E-mailed to up to three addresses or sent out as SNPT traps to predefined targets. There’s even a page to allow the unit to get the correct time via an Internet time server; while the default settings did not work on our unit we were able to program in settings that did work.

The simple but ingenious front panel interface consists of a three-character LCD display and a single pushbutton. Pressing and holding the button generates a “beep” through the front panel; hold it down as long as is needed to perform the desired function. Two beeps shows the IP address on the display, four beeps enables or disables DHCP, and six beeps wipes out all of your carefully programmed settings, as I learned the hard way. Sadly, there’s no way that I could find to save them …

The 1581 ships with a simple setup manual, a CD with more manuals and software and a Web interface that is the easiest way to go unless you are using many units in an enterprise type of environment. The Web interface is fairly intuitive if you have any IT experience, but the manuals walk you through it pretty well.

I was up and running fairly quickly, although I did hit one snag. The Web interface gives you an acknowledgement screen after every change, and that pop-up has a check box allowing you to turn off the pop-up — don’t do it! If you tell it not to show you the pop-up, you won’t get the acknowledgement screen anymore either and the unit won’t hold any of your programming. Another lesson learned.

The included RPM utility software is useful if you are programming multiple units. It is very full featured, adds some reporting (i.e. power usage) but could use an update to at least the manual. You need to run it in administrator mode in Windows 10 (the manual only goes as far as Vista and Windows 7), set up a database (either Access or SQL) and tinker some but it does the job.

Testing consisted of trying out the features and turning outlets on and off. Not very exciting, but rock solid; this unit never missed a beat. The grouping of outlets is a great idea — it allows you to reset a server with redundant power supplies if needed, and the sequential programming of outlets was handy as well. I’d like to write more about the testing, but, outside of the few software peculiarities I uncovered, it worked reliably and without a hitch. It’s an infrastructure product and, at the end of the day, substance is far more important than flash.

The more I worked with the 1581, the more uses I thought of for it. Sure it costs more than a power strip, but strategically installed it will save site visits and service calls. Sure you can reset individual devices through their own software interfaces, but there’s nothing quite the same as pulling the plug and that’s what these RPM products do.

How much did I like it? I’ll be buying one for our server rack here in our office and plan on specifying these units on future projects. If glueware holds things together, I expect the Minuteman series of remote power management systems to be gluing our projects together well into the future.