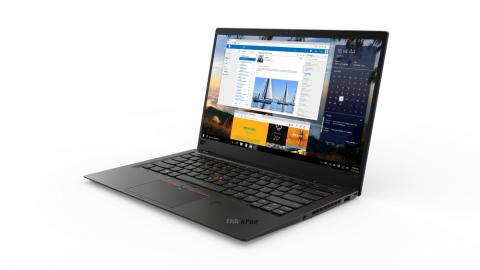 THE THINKPAD X1 CARBON (6th Generation) carries on a tradition of excellence that goes back to 1992, when IBM shipped its first ThinkPad (Lenovo acquired the brand in 2005). By 1993, ThinkPads were the laptop of choice for NASA, thanks to solid quality, a good keyboard, strong performance, and sturdiness. True to that heritage, this new ThinkPad is solid even for an ultralight, has a good keyboard, clear screen, and some other modern goodies.

One of a Large Family

This model is about the middle of the ThinkPad X1 Carbon lineup. There are multiple models with Core i5 processors, more RAM (16GB max), SSD storage (1TB), and higher screen resolution (2560x1440). All come with a webcam offering 720p resolution and a sliding “ThinkShutter” that blocks it. Another security advantage is the fingerprint reader.

A fair number of ports are provided, including a full-size HDMI port, which is rare for an ultralight system. At just over a half-inch thick, there’s no room for an Ethernet port, but an inexpensive dongle is available.

Our unit is black (it also comes in silver) and made of magnesium alloy covered with carbon fiber reinforced plastic that has an interesting feel; the matte finish wards off fingerprints. The power brick, smaller than some competitors’ units, provides 65 watts. 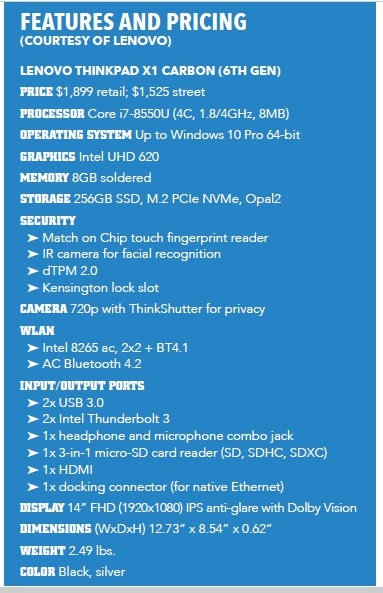 There’s not much to set up with this laptop. The right side holds one of the two USB 3.0 ports and the headphone/microphone combo jack. On the left is the other USB 3.0 port, a full-size HDMI port as mentioned, a docking station connector, an Ethernet dongle port, and the power port, a USB-C Thunderbolt receptacle. A micro-SD card reader is on the back.

Accessories included? None. Popular ones are a docking station that works with a huge number of Lenovo laptop models, making it easy for companies to standardize. A few years ago, the Ethernet dongle would have been a mandatory option, but not today. The Wi-Fi support on this X1 is blazing and maxed out our lab’s 200 Mbps internet connection.

Extra software installed with Windows 10 Pro we have to blame on Microsoft. Why does Microsoft force business machines like this to include the “Play” options in the Startup box? Do people who pay real money for a real laptop really play Bubble Witch 3 Saga, Candy Crush Soda Saga, or March of Empire: War of Lords? The Office 365 trial version is also included, of course. But that’s the end of what some call “bloatware.”

Lenovo contributes the Vantage utility program, a useful interface to a wide range of admin tasks. If you need the user guide, it’s here, along with a keyboard shortcut map. A variety of power settings are close at hand, as is a simple update display for Microsoft and Lenovo software and drivers.

If you’re new to Lenovo laptops it may take you a while to get used to the keyboard. The TrackPoint button won’t get in your way, but it is handy. For easy clicking, Lenovo put two mouse buttons at the top of the trackpad for effortless reach when using the iconic red rubber nubbin. When using the trackpad, the bottom half-inch works as the mouse buttons. Multifinger actions, like two fingers to scroll, work on the trackpad and the touchscreen.

Faster Pricing and a New Portal Are Coming to Lenovo Partners This Year
January 6th, 2020