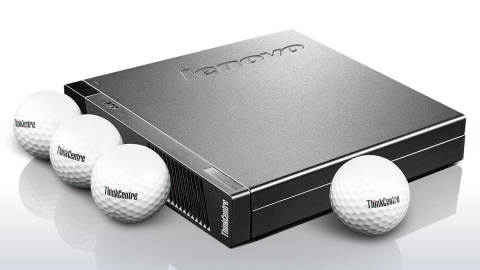 This quiet, diminutive PC offers all the power of a traditional desktop while freeing up office space and keeping down the noise. By James E. Gaskin
Tweet

Desktop PCs haven't needed a large case with large fans and easy access to the inside to swap out components for more than a decade. Then why are so many still built that way? Tradition? If so, Lenovo, which built IBM PC desktops and laptops so well the company wound up buying the business from IBM, has a new take on tradition: the ThinkCentre M83 Tiny.

Far smaller than a hardback book, the M83 we tested packs an Intel i5 processor, 8GB of RAM, a 500GB hard disk, Intel’s 4600 graphics subsystem, and a wealth of ports and connections into a very small box. While Intel may have its own NUC (Next Unit of Computing), Lenovo's M83 Tiny adds some size but makes room for extra connections and trims the price. Plus there are many more configuration options with the slightly larger case, so resellers can get exactly the power and capacity they need from a longer menu of options.

We doubt the M83 moniker Lenovo came up with is in reference to the French electro-pop band of the same name, but many geeks are big into music, so perhaps it is. Tiny is the better name, though, because the box really is small enough to practically disappear. In fact, Lenovo offers the M83 Tiny paired with a 23-inch monitor to make a DIY all-in-one (Figure 1), which is reviewed here.

Getting Started
Unboxing the M83 Tiny takes little effort beyond searching for the computer underneath the keyboard in the box (yes, the keyboard box hid the CPU). And it comes with a good keyboard too, one that looks like the old IBM PC keyboards in many ways: high top keys with long throws and a solid feel. The two-button mouse with scroll wheel is nice and accurate, but not as sweetly nostalgic as the good old-fashioned keyboard.

There's a VGA port and a Display Port on the back side of the M83 Tiny, and you can, in fact, power and manage up to four monitors with some finagling. In our case, we connected an Acer 1920 x 1080 monitor, the de facto corporate resolution today, via the VGA port. One USB port on the back has a keyboard icon, and when the keyboard uses that port, Alt-P acts as an on-and-off button. Handy.