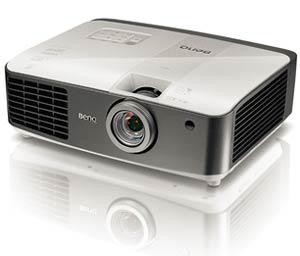 BenQ's W1500 Projector is an affordable solution that produces a bright and vivid image for cable and Blu-ray content with praise-worthy 3D performance. By Robert Archer
Tweet

It’s been an interesting ride for video manufacturers the past few years, but 2014 things look to be heading in an upward direction. Mirroring some of the trends in the audio market, value reigns supreme with homeowners cautiously spending on upgrades. The BenQ W1500 Projector is one way to satisfy their hunger for fun and affordable video.

Features
The W1500 is a small, even travel-friendly, product with a foundation of Texas Instruments’ (TI) DarkChip3 chipset and a six-segment color wheel. It features the Wireless Home Digital Interface (WHDI) that supports the ability to transmit HD video wirelessly. The W1500 also offers active 3D plus 2D-to-3D conversion.

The projector offers ISF Day/Night mode calibration options and a Rec. 709 color gamut capability. BenQ’s SmartEco option automatically adjusts the lamp power based on the brightness levels of the content, and it saves on energy consumption and supports up to 6,000 hours of bulb life. The projector also has frame interpolation, lens shi ft and short-throw setup provisions.

Setup
I connected the W1500 to my home theater system via HDMI to my Integra receiver. The first thing I noticed was its brightness and its slight green push. After a few minutes I began to eye things and make adjustments that included putting the projector in its “standard” picture quality mode, dialing down the “flesh tone” setting from 3 to 2, and activating the frame interpolation by using its “low” setting.

Watching Fox shows Bones and Sleepy Hollow, I was impressed with the images. Colors were solid, the contrast ratio and brightness levels were good, and it ran quietly. I dug deeper into the W1500 to adjust the black and white levels, color, sharpness and more. I set the color temperature to “normal” and through the advanced sub-menu I was able to fine-tune options, including “detail enhancement,” which I stepped back from 3 to 2.

Performance
Those who haven’t kept up with the entry-level side of the market will be stunned to see how far companies like BenQ have taken the performance of their products.

Watching the NFL Network’s Thursday Night Football broadcast of a Kansas City- Philadelphia game, the W1500 was able to produce the deep red hue of the Chiefs’ uniform pants with a vibrant accuracy, and the shades of green between the Eagles’ dark green jerseys and the grass field were also accurate and highly detailed.

The wireless and 3D options delivered mixed results. I must admit I could not get the wireless to work. I won’t hold this against BenQ, however, because I’ve tried several wireless products in my theater system and could never get any to work. As for its 3D capabilities, I had much better success. Once I adjusted the 3D settings to the same levels I set in 2D, content such as Underworld Awakening and Digital Projection’s Disney Digital 3D Powered by Blu-ray promotional disc looked solid. I didn’t notice any ghosting, and low-level grayscale reproduction was also good.

The only issue I could detect with the W1500’s performance was its processing. The projector produces noticeable interlace and jitter noise and only after setting the processing to “high” was I able to mitigate the motion artifacts.

Value
For a reasonable amount of money, this projector produces a bright and vivid image for cable and Blu-ray content, and its 3D performance is also praise-worthy. One would have to spend two- to three-times the amount of money to achieve noticeably better black levels, brightness and image smoothness.

I loved the W1500. That I couldn’t find success transmitting wireless HD images isn’t a deal breaker for me because I think this is still an evolving technology that should only improve over time. In fact, after putting its images up against those produced by my 4-year-old mid-market LCoS projector, I actually put in a request to purchase the W1500.

Transform Your MSP into a Valued Data Partner

Getting Employee Buy-In on DEI
END_OF_DOCUMENT_TOKEN_TO_BE_REPLACED

Jabra PanaCast Review - Get Your Huddle On
END_OF_DOCUMENT_TOKEN_TO_BE_REPLACED