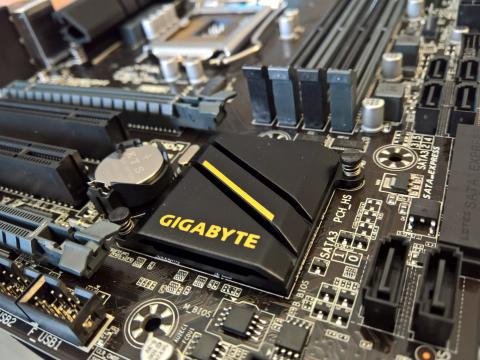 System builders are often seen as computer enthusiasts looking for the most extreme of high-end computing. Important as this market is, it doesn’t represent the portion of builders who build PCs for general productivity – and that’s who Gigabyte’s GA-B150M-D3H-GSM Mini-ATX motherboard is for. By Matt Whitlock
Tweet

System builders are often seen as computer enthusiasts looking for the most extreme of high-end computing, meaning components that push the envelope of performance: graphics cards stacked with massive coolers, unlocked processors, massive water or liquid coolers, and motherboards engineered for extreme overclocking. Important as this market is, it doesn’t represent the portion of builders who build PCs for general productivity – and that’s who Gigabyte’s GA-B150M-D3H-GSM Mini-ATX motherboard is for.

I wouldn’t describe the GA-B150M-D3H-GSM as cutting edge or flashy, nor would it be of any interest to a builder constructing a PC for him- or herself. However, it’s a dream come true for channel builders, like those who sell large fleets of desktop PCs into small and midsize businesses. The “GSM” in the model number means it’s a Gigabyte Stable Model, which means this board will have a much longer life cycle than the typical board, 14+ months at least, as well as a three-year warranty and an advanced replacement service to minimize downtime.

The B150M-D3H-GSM we received didn’t exactly come stock with the trimmings I’ve become accustomed to with performance-oriented boards. Along with the board itself, there is a metal I/O shield for the case, a brief manual, and two SATA cables. For a basic desktop, meaning CPU, board, storage, and maybe an optical drive, this is pretty much all you need.

The board itself is dubbed as “Ultra Durable,” which (to be honest) is marketing speak for a whole host of claims around performance and construction, but what it means really depends on the model. What I will say about Gigabyte’s B150M-D3H-GSM is that it is indeed well constructed, at least as well as most other quality boards in this class. There is no PCIe metal shielding or fancy jet-black capacitors, but there is a Dual-BIOS system as a backup for malfunction or misconfiguration. 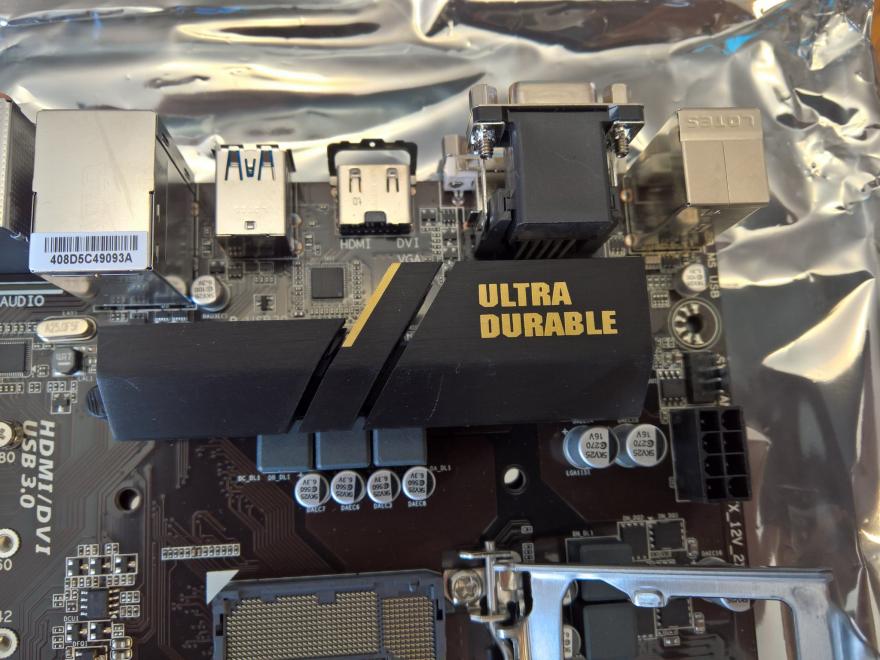 What I found particularly notable is how much thought went in to the layout and feature set of this particular board. I generally find some glaring omission that makes me scratch my head in bewilderment, but this one hits the basics with aplomb.

The LGA1151 socket supports the latest 6th Generation Intel Core CPUs, backed up by Intel’s B150 Sunrise Point chipset for Skylake. The B150 chipset gives you up to 8 PCI express lanes to work with, USB 3.0 and 2.0 support, Intel VT-d, HD Audio, and Intel RST. It isn’t the chip for more extreme builds, but certainly sufficient for a business class desktop. 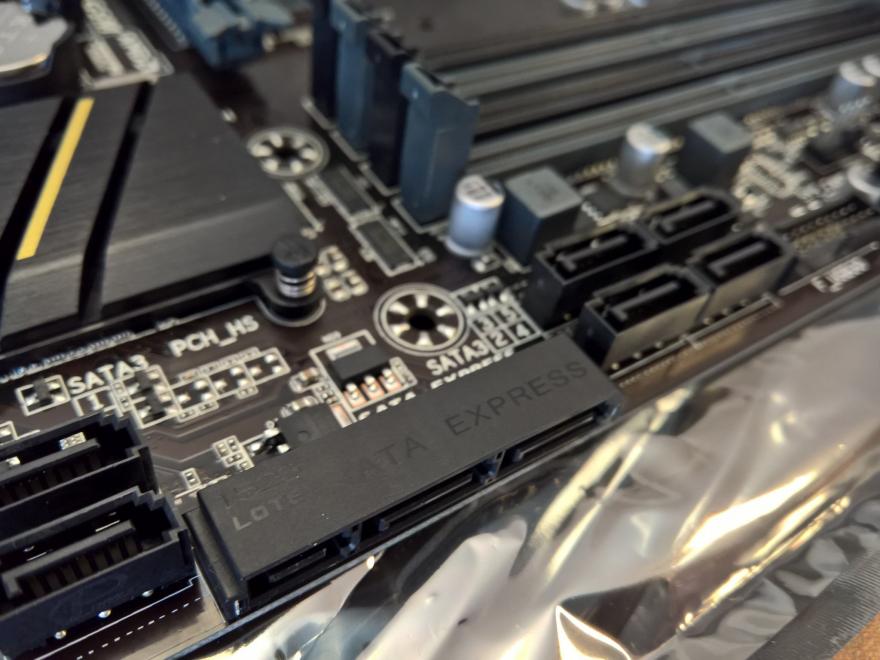 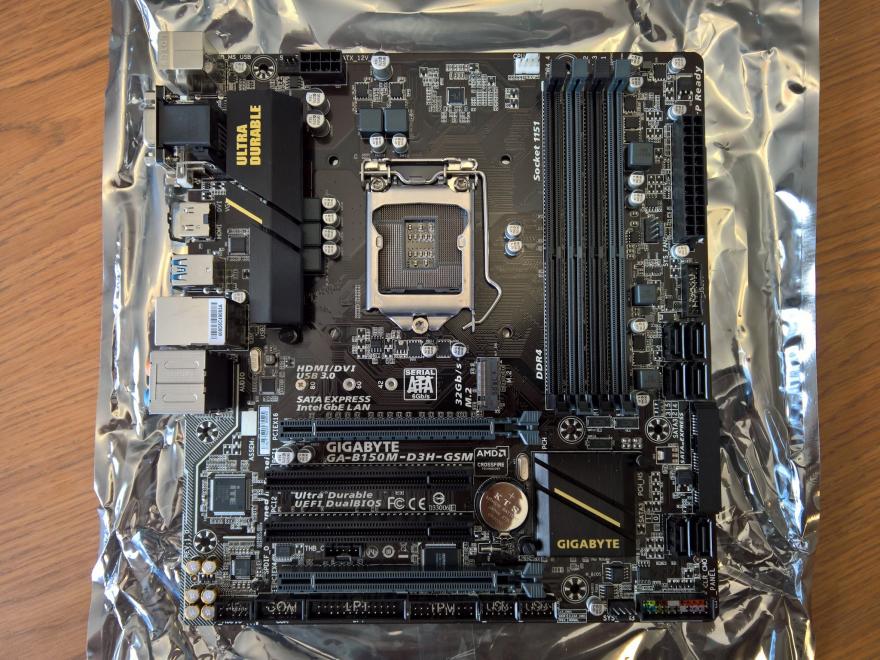 All three graphics ports can be used simultaneously, which is nice for those who like to run lots of screens without going to a full GPU. If I have any gripe, I would have preferred to see Display Port over the HDMI jack as a future proofing measure, especially how it’s cropping up on newer UHD displays. I suppose those looking for broad 4K support would probably prefer a separate GPU over on-board graphics for performance reasons, although it does support 4K over HDMI. 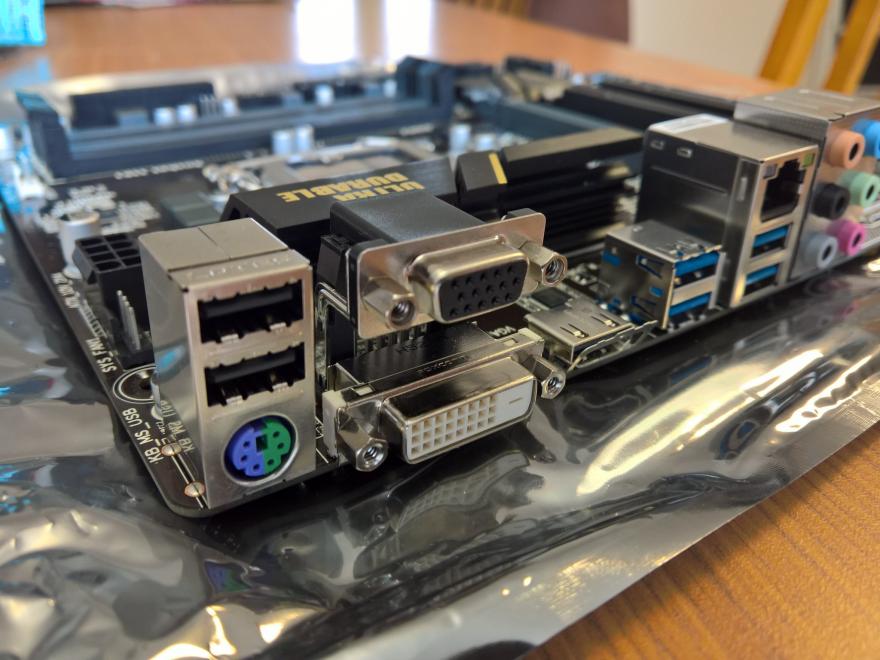