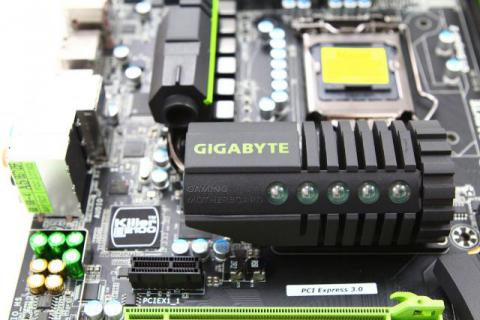 If you are looking for a new board for the upcoming Ivy Bridge processors and you really want to go all out, I highly recommend taking a look at this motherboard. Gigabyte has been really good at giving the enthusiast community the kinds of features that they really want. By B. Ramirez
Tweet

Now that we’ve had a look at some of the main features of the chipset, let’s get into what features Gigabyte has added. If you are familiar with the G1 series motherboard this board follows the same color scheme and core features. In my opinion this is either going to be a board that you think looks amazing, or you just can’t stand it. If you are an NVIDIA fan you will love the green and black colors of this board. It also features their gun barrel style heat sinks and their magazine style south bridge heat sink.

One of the first things you’ll notice when taking it out of the box is how heavy it is. This board has a really nice, solid feel to it. Gigabyte has included all of their Ultra Durable 3 features into this board to give it added durability and increased performance. All of the capacitors are Japanese Solid State, and this board also features twice the normal amount of copper in the PCB. It also features their integrated MOSFET drivers and ferrite core chokes to provide strict power regulation to the CPU socket. Along with these features it also has Gigabytes Dual BIOS technology for enhanced durability.

This board features dual PCI-E x16 graphics expansion slots for SLI or CrossFire support. These slots will only run at x8 though if you are using both of them. As I’ve stated previously, this really won’t degrade your gaming performance. At the very most there is only a difference of a frame or two between running your cards in x8 as opposed to x16. This board also features PCI-E 3.0 architecture support for future graphics cards. This feature will only be made available with the new Ivy Bridge Intel processors. There are also 2 PCI-E x1 slots and a legacy PCI slot for expansion.

This board uses a Marvell 88SE9172 chip to provide two SATA 3.0 support and two chipset driven SATA 3.0 support. There are also three SATA 2.0 ports provided by the chipset. This isn’t as much storage expansion as I’d like to see with a board like this, but it should still be plenty for most users. I would have also liked to have seen all SATA 3.0 support for improved storage performance. It looks like this might have been one way that Gigabyte chose to reduce costs. If you are only using a single solid state drive and have the rest of your mechanical storage plugged into the SATA 2.0 ports, you really aren’t going to notice a difference because mechanical drives really can’t take advantage of the extra bandwidth anyway. This was probably a really smart way for Gigabyte to reduce costs without lowering performance.

One of the other features of this board that’s worth noting is its support for Intel’s Lucid Virtu technology. This feature allows the user to switch between the embedded graphics solution and their discrete graphics card, without having to change cables. All you need to do is have the monitor cable plugged into your motherboard’s onboard display connector and then your video will be able to switch between the embedded graphics on your processor, and your discrete graphics card. You will take a performance hit in games and 3D applications by using this feature. This is mainly meant as a way to save time and energy for those that aren’t worried about gaming or 3D performance. If you happen to be a gamer or a 3D designer then this feature won’t appeal to you as much.