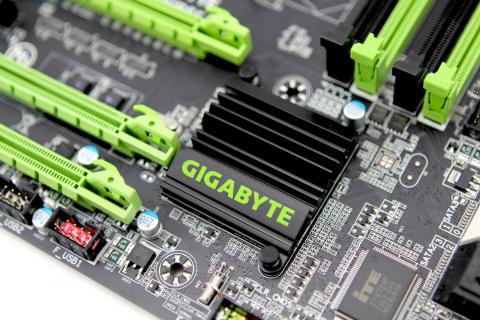 The all-new Gigabyte G1 Sniper M3 is priced at an almost entry level price tag, but with features slightly above that range of product making it a solid Hot Product for the Z77 platform and for fans of the mATA form factor. By Elric Phares
Tweet

The Gigabyte Sniper M3 being a Z77 model supports Dual channel DDR3 at speeds up to 2400MHz. We have seen some boards that are pushing well in excess of 3000 MHz now or even straps up to 3000+ so we are hoping that this board advertising up to 2400 is just a start for its overclocking abilities. The color scheme remains the same with the green and black being the prevalent colors the same as the other models we have seen in this series so some things remain the same anyways

Speaking of overclocking we noticed that the Sniper M3 has only a 4 pin CPU power connector which seems a little bit lacking when the Sniper M3 is supposed to be a high performance gaming centric motherboard. Looking at the competition other high end or gaming centric boards utilize full 8 pin CPU power connectors so we are really hoping this will not cause instability and really makes us question the performance target that this motherboard is aiming for. Every G1 killer series board we have seen previously have been built to overclock as well as game but this board with only the 4 pin feels a little lacking. On the same token also a 6 Phase for the CPU also feel a little bit light but from what we have seen from Ivy Bridge this may not pose a major problem unless pushing for the top end clocks or extreme benchmarking at 6+GHz

The Chipset cooler is about standard in size for what we find on a mATX offering although there was an issue we observed with the application. Within BIOS we noticed that chipset temps would read quite high from a cold boot (high 40’s through low 50’s) and if left in the BIOS the chipset would reach up to low 60’s which seems a little excessive and upon removal of the chipset heatsink we did find the thermal paste to be a hard strip which did not seem to squish out well and honestly did not provide a good thermal transfer. Once we removed the hard paste strip and applied new paste the temps dropped nice and proper with not a single issue afterwards.  Now do note that under standard clocks this may not be an issue but when pushing clocks or under strenuous usage we could see this developing an issue or even worsening over time so keep an eye on temps and check paste is high temps are observed or just save the trouble and repast out of the box.  Now do note that being a review sample these are pre-production in most cases and we have informed Gigabyte of the issues and they assure that their QC department will be double checking for this sort of issue.

Here we see the SATA port offering which once again feels a bit scant as it offers dual SATA 6G ports and dual horizontal 3G ports and a single 3G port placed vertically at the lower boards edge. The chipset supports 4 SATA 3G ports and dual 6G ports and that leaves us with a single missing port, which we found at the rear IO as an eSATA port, which seemed like a strange option, as the number of users using internal SATA ports vs. eSATA is much higher.

The slot configuration is quite interesting for a mATX board as many labor cases have 4 available expansion slots at max and the 2 GPU capable slots that would utilize x8 each are triple slot spaced which means that the lower card would be willfully out of luck for a cooling grid outlet since the slot that is dual slot spaced away is only a x4 slot.  We are not quite sure what the layer designer was thinking on this design as it eliminates ALI setups for many users in LANBOX style cases due to the larger triple slot spacing.  This unfortunately is quite a large oversight by the team as it limits most users to a single card configuration and could easily have been avoided.

Here we see the IO layout which has a decent mix of connections although it is once again following the theme of lacking a bit due to the large size of the DVI/VGA output blocks.  In this same space 2 output blocks of more USB or other ports could have been placed.  This board definitely does do a great job of covering any display type as it supports VGA, DVI, HDMI and diaplayport, which means no matter the display it can easily support connectivity. Now due to the addition of all of these display outputs we find that the other connectivity is quite lacking as the USB connectivity is reduced to 4x 2.0 ports and 2x 3.0 ports. Add to this a single Gigabit LAN port and a single eSATA along with a mouse or keyboard PS2 combo port (not sure why anymore) and of course the obligatory audio up to 5.1 outs with an optical S/PDIF port.

Jabra PanaCast Review - Get Your Huddle On
END_OF_DOCUMENT_TOKEN_TO_BE_REPLACED