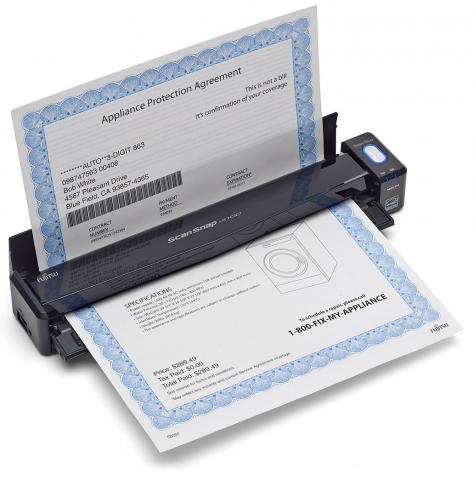 This portable scanner balances quality and price, and its ability to wirelessly scan to smartphones or other devices pushes it to the top of the portable scanner heap. By James E. Gaskin
Tweet

Portable scanners aren't new, but one from Tokyo-based Fujitsu Ltd., maker of the benchmark ScanSnap S1500, deserves some attention. Luckily, the company’s new portable ScanSnap iX100 not only withstands the spotlight, it deserves it. That's because it scans quickly with good quality and connects wirelessly to computers and even smartphones. It's not the first portable scanner to connect to smartphones, but it is the first we've seen with an internal lithium-ion battery that recharges when connected via USB.

It seemed most appropriate to test a portable scanner with a laptop. Our test bed was a Dell Vostro V130 running Windows 7 Professional 64-bit on an Intel i3 processor with 4GB of RAM.

Like most peripherals, the ScanSnap iX100 comes with drivers and software on a DVD. Install the Scansnap.exe program then attach the scanner to a USB port. The software has the usual license agreement, file location, and yes to start. In this case, the DVD offers a chance to get the newest software directly from Fujitsu. We wouldn't have agreed had we realized that meant waiting for 437.7MB of download through what seemed to be a throttled Fujitsu website. When you do it, load from the DVD and update later.

A screen that displays inactivity time before shutdown appears next, to keep you from draining the battery. It’s good info, but it’s an interesting place to put that warning.

Once the software is installed, plugging the portable scanner into a USB port (2.0 is the fastest port supported) is the last step. Turn the iX100 on by pulling down the front lip to make a short ramp that guides the sheet of paper to be scanned. Either push the big silver button on the right top part of the scanner to start, or click the icon on your computer.

Supporting software that should have been included on the DVD resides at the Fujitsu website. That's not unusual, but what is odd is the need to fill out a form to receive a link to the software via email. We’ve never seen that before, and it slows down the setup process more than necessary. We downloaded CardMinder and ABBYY FineReader applications without a problem (except the rather slow process), but the SnapReceipt software refused to run on our version of Windows.

Setting up the wireless link took a bit more work than the instructions indicated. We had to connect the scanner to the laptop and run the ScanSnap Wireless Setup Tool, which was expected. The iX100 provides its own SSID, and the password is the serial number. The little trick is that wireless software setup later asks for a password again. This time it wants the four digit password listed on the bottom of the scanner. FYI, that password is the last four digits of the serial number/SSID password.

Once we figured that out, our laptop was able to connect directly to the scanner (you can also link the scanner to your existing Wi-Fi network, but if you're in your office just use a cable). That means we had to disconnect the connection to our Internet service. This feature seemed pretty lame, until we realized that one scanner acting as a wireless hub can support multiple computers. Not a common situation, but one in which only the ScanSnap iX100, as far as we know, can handle.

And speaking of clients, how about scanning to your smartphone? Yes, the iX100 can do that. Download the Fujitsu app for your phone OS, in our case Android, and add the wireless information into your phone. Scanned items appear in the phone app wirelessly. You may not need that often, but if you do, you will be even happier with the iX100.

Small software problems notwithstanding, once the drivers and main software were loaded, scanning was simple and easy. Slide a sheet into the scanner then hit the silver button on the top right of the unit. Keep sliding sheets in one after another until that batch is finished, and hit the button again to stop the scanning, or click the Finish Scanning in the laptop software. Choices of how to process the scans appear in the ScanSnap software.

Only one side of one sheet is scanned at a time, so double-sided pages must be turned over and run through the scanner a second time. Expecting duplex scanning with a document feeder remains a dream on a unit this small. Fujitsu does have bigger portable scanners that handle more pages, but they cost more and don't have the wireless support found on the ScanSnap iX100.

With this scanner, you don't need a separate business card scanner. The included CardMinder software works surprisingly well and creates usable records from scanned cards with far better accuracy than we expected. Even better, the Fujitsu lets you feed two cards at one time and still keeps all the information straight. We fed cards in as fast as we could, one on the left side of the scanner then immediately on the right then back again on the left, and it never missed one. Scan a batch, tell CardMinder to process them, and boom: You have a database with an image of each card as well. Two-sided cards can be combined and shown as two-sided cards, not two one-sided cards, which is even more useful for business users who gather cards.

The other main software package is a version of ABBYY FineReader, Fujitsu ScanSnap version. OCR software needs a much longer and more detailed review than we can provide here, but an inexpensive scanner like this with ABBYY software can do more than expensive document management consoles did a decade ago.

You can scan to Google Docs/Drive and to Dropbox directly. Google added some security changes with alerts and emailed warnings, which is good. Dropbox worked directly since we had the client software already loaded on the laptop. In this case, just route scanned documents to the Dropbox folder and they will appear in the Dropbox cloud in not too many seconds. Or you can just save the scans somewhere on your computer or network.

You can buy cheaper portable scanners, or more expensive ones. But so far, Fujitsu's ScanSnap iX100 does the best job of balancing both high quality and affordable pricing. Add in support for wireless scanning to multiple clients including smartphones, and the ScanSnap iX100 seems to have leapfrogged the portable scanner market.

ICYMI: Our Channel News Roundup for the Week of March 30th
END_OF_DOCUMENT_TOKEN_TO_BE_REPLACED