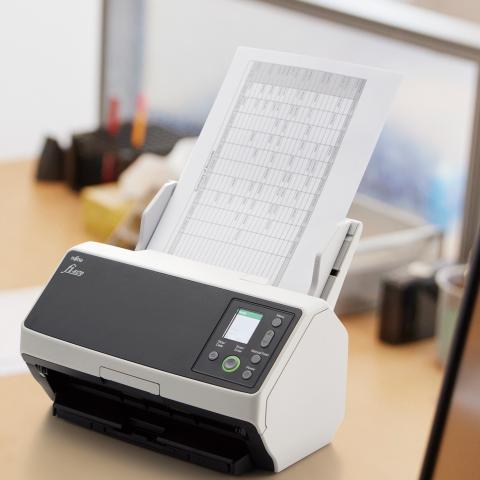 If your customers need a personal or workgroup desktop scanner that even an intern can use and get great results, check out the Fujitsu fi-8170. By James E. Gaskin
Tweet

SCANNERS AREN’T GOING AWAY because paper still rules in so many businesses. Healthcare, finance, insurance, and government offices all report increasing scanning volumes, according to workflow experts.

All scanners are similar, but not equal. Over the years, scanner quality has developed to the point that every desktop machine makes good digital copies from a standard sheet of paper. The best scanners have better quality, yes, but also easier setup, clear software for casual users, and more flexibility than their counterparts. That’s the case with the Fujitsu fi-8170, the first available model from the new fi-8000 series. The pending fi-8270 is a combo desktop and flatbed scanner, and the fi-8190 is a little faster and rated for more sheets per day (13,000 rather than 10,000 for the fi-8170).

For most companies, the fi-8170 will be all the scanner they need.

Aimed at businesses, the fi-8170 arrived in a brown box—packed and taped so aggressively it could ship from Mars with no damage—with a picture of the scanner, not retail packaging.

The physical setup was straightforward. Where some scanners slow you down is the seemingly endless list of drivers, utilities, and applications that must be loaded and configured to work properly. Not the fi-8170. Our early-release version came with a DVD, but now the Fujitsu website has the software ready for download. Downloading and installing the software bundle takes just a few clicks along with the EULA screens.

The “basic” scanner application, PaperStream ClickScan, is the first to load, followed by PaperStream Capture, which has more granular settings and batch capabilities. Various utilities and drivers all installed properly, including Help. The install routine checked for and installed updates.

I then plugged the scanner into the client PC with the supplied USB cable. Here's where other scanners begin the configuration process, but not this one. After turning it on, I put some paper in the automatic document feeder (ADF) and hit the green-rimmed scan button. A dozen pages zipped through the scanner far faster than my personal Fujitsu ix-500 could handle them. The PaperStream ClickScan application opened, and I had a choice of where to route the scanned pages: Folder, Email, Printer, or Application.

All choices show a preview of the copied pages, with a large image in the middle of the screen and thumbnails on the left. On the right, a filename box (saved as PDF) and destination folder box appeared. Under those were the Save button, or a Back and Cancel option. For Email, I could attach the digital PDF file to an email. Printer let me pick an existing printer to send the file to, and Application opened my default PDF viewer. This is by far the fastest box-to-scanned process I’ve seen.

There are USB and Ethernet ports on the unit, but only one at a time can be active. For workgroup scanning, you can install the software on several PCs and connect via Ethernet.