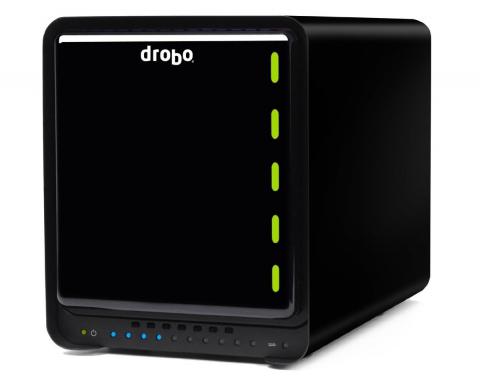 Drobo's 5D can keep up with the data demands of video editing, provide protection against a one disk failure, and allows for easy increases in capacity... if you can get over some finicky behavior and setup troubles. By John McCormick
Tweet

If you’re involved in any type of computing that requires a lot of storage, you’ve probably spent some time researching options for external storage systems that provide some combination of speed and safety. As a video producer, it’s not uncommon for one of my projects to consume 100-200 GB of storage space, so my free disk space tends to evaporate quickly, and managing backups for all this media can be a nuisance at best.

In my inquiries of friends in similar positions, the name Drobo has come up frequently, and in looking at their offerings, the Drobo 5D caught my eye. As I’d be using this system as a primary video editing drive, speed of access was critical, and with the quantity of media I deal with, having some sort of inherit data loss protection was also a priority. The 5D offers both Thunderbolt and USB 3.0 interfaces, both of which provide excellent transfer rates (about 5 Gbps for USB3; 10 Gbps for Thunderbolt). There is also a 5N version which has 1 Gbps Ethernet connectivity for a NAS storage system.

The Drobo 5D provides five 3.5-inch hard drive bays for SATA drives (either hard drives or SSD). Drive installation is tool-less—you just slide the drives in and they latch into place. Drobo systems are hot-swappable, so you can add more storage or replace a failed drive without cutting out access to the system while doing so.

The system provides a RAID5-type protection system, with the protection spread out over all drives and protects against a single drive failure. (Note—you need to have at least two drives installed for data protection.) However, they have extended the RAID5 concept (calling it BeyondRAID) to allow for varied drive sizes and hot-swapping any drive out for another drive, and that replacement drive can be larger or smaller than the original (smaller only if the data will still fit in the system’s new aggregate storage size). And you can also activate an option which turns on dual-parity, allowing for protection against two simultaneous drive failures.

As RAID5 systems only offer data redundancy and no speed acceleration like you would get in a RAID0 configuration, Drobo provides a slot on the bottom of the chassis for installing an mSATA SSD card. The SSD is used as a read cache, providing faster access to data once the Drobo decides to load that data into the cache (after the first read). Adding an SSD card isn’t a requirement, but if the SSD is present, the first time you read a file from the Drobo system the data also gets loaded into the SSD cache. The second time you read the same data, the read hits the cached data in the SSD and not the hard drives. This should provide quicker access to media files when video editing, which is mostly all read access to media, and numerous reads of the same data. 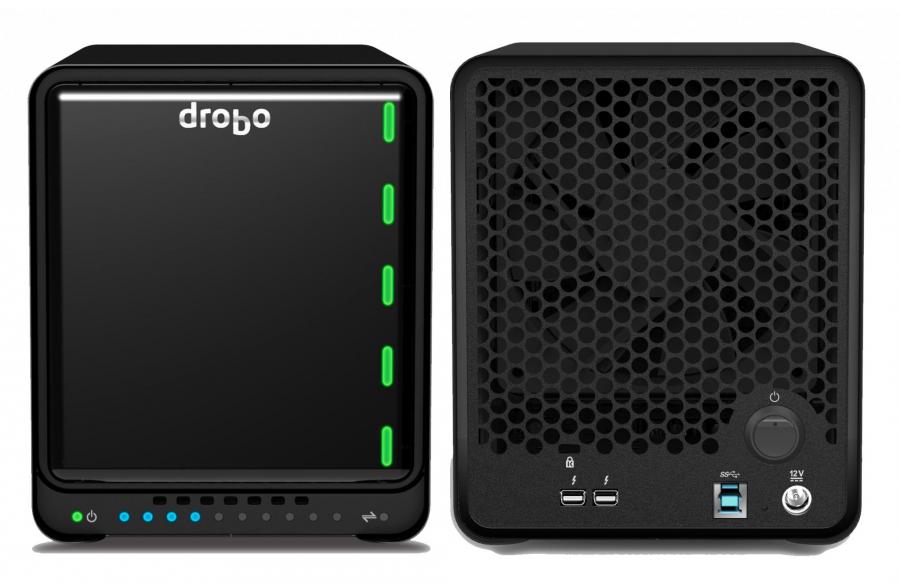 There is also a small battery-backup system built in which keeps the system running long enough in the event of a power failure so that any data that is in-memory is written to non-volatile flash memory. This data is then written to the hard drives when the system comes back up.

The Drobo 5D implements a thin-provisioned volume system that lets you create a volume on the drive of up to 16TB in size, even if you don’t have that much storage space to support it. Storage is allocated to a volume on an as-consumed basis, and the system lets you know if your available storage is getting low so you know you need to install an additional drive for more storage, or swap out a smaller drive for a larger one. So, you could start out with your Drobo having two three-TB drives installed, and create a 16 TB volume on it. When the space utilization of the volume gets close to exceeding the six TB of physical space, the system indicates to you through both the drive bay indicator lights as well as Drobo’s dashboard application that you need to add another drive. Pop a drive in, and the Drobo automatically configures it for use as part of the BeyondRAID system, and it’s ready to use within a few minutes. It’s really as simple as that.

I bought my 5D as a package from B&H Photo Video in New York City, with five Seagate ST4000VN000 4TB hard drives, giving me 20TB of raw storage. I also bought a Crucial M500 mSATA SSD card for the read cache. And, as I thought my editing system is old enough to not have USB3 built in to the motherboard, I also purchased a Sonnet Tango FireWire 800/USB 3 PCI Express expansion card. (It turns out that two ports could be set to USB3, which I’ll discuss later.) My Lenovo W530 laptop, which I also use for editing, has USB 3 already built in.

The Drobo 5D is solidly constructed with metal chassis and designed for easy access. The front panel, which covers access to the hard drive bays, is magnetically attached and easy to pop off. 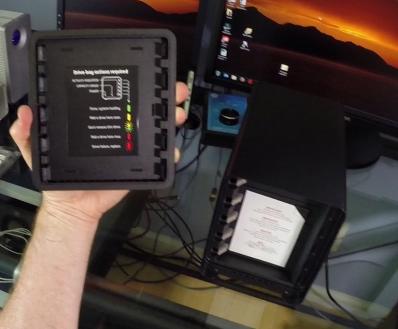 A status light is placed to the right of each bay and visible through the translucent front cover, and indicates drive status—green for good, yellow for an issue that indicates the drive should be replaced soon, and red for failure that requires immediate drive replacement to prevent data loss. Also on the front panel below the bays is a power/online indicator light, and a series of blue LEDs that indicate storage utilization. 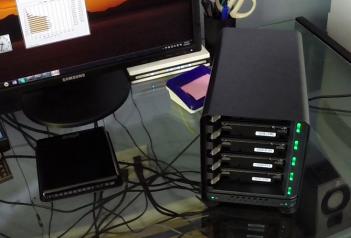 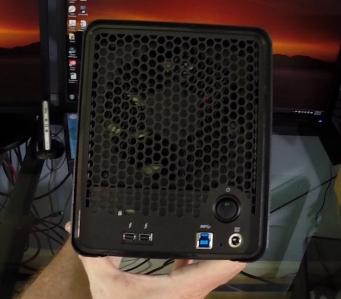