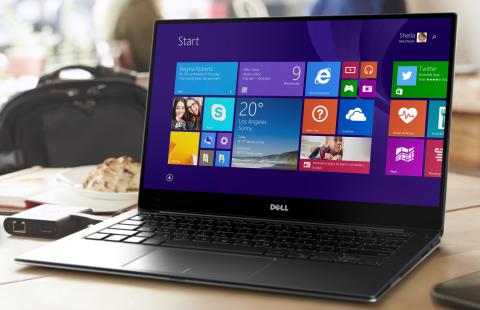 This is a laptop your mobile team will not "lose" in order to get an upgrade, because this may be the lightest, fastest, and envy-inducing Ultrabook on the market right now. By James E. Gaskin
Tweet

The Dell XPS 13 Ultrabook is the little brother of the XPS 15 executive bling laptop we reviewed not long ago. This model has the newest 14 nanometer Intel processor (i5 in our test unit), a Solid State Disk, a high-resolution screen (3200 x 1800), and the same executive-envy causing brushed aluminum chassis with carbon fiber keybed. In other words, this is the Ultrabook you give to your best road warrior as a status symbol that will help them keep beating quota.

Road warriors will appreciate how this laptop feels solid and rugged yet still weighs less than three pounds. They will appreciate the long-lasting battery (from eight to fifteen hours, depending on the job, processor, and screen resolution). They will appreciate the straight-razor sharp screen with higher resolution than the best MacBook Pro Retina screen. This is a laptop your mobile team will not "lose" in order to get an upgrade, because this may be the lightest, fastest, and envy-inducing Ultrabook on the market right now.

Unpacking provided the same carriage-trade feel of quality as did the XPS 15, right down to the presentation box made of heavy black cardboard. The black velvety insides provide a fitting contrast to the brushed aluminum top and bottom that look like they were made from poured liquid. The mirror-polished Dell circle logo pops from the matte gray surface. The carbon fiber insides feel warm somehow, not cold like plastic or aluminum. Dell says the aluminum top and bottom is machined rather than stamped, and it feels like it. The combination of machined aluminum and carbon fiber keep the weight down but strength up. If Ford can make their new F150 pickup out of aluminum, Dell can certainly make their new Ultrabook out of the same stuff.

The power brick is small with rounded edges. Even better, it includes a two-prong AC plug so the brick can become a small and rounded wall wart.

Our first thought when we opened the lid was that somehow we'd gotten an 11-inch Ultrabook, not the XPS 13 with a diagonal screen size of 13.3 inches. When we hit the power button and the screen lit up, we realized why we were fooled: the screen takes up almost the entire lid, with only about three-tenths of an inch of border. Not bezel, because the bezel is a tiny frame, but border. Dell calls this their "infinity screen" for good reason, because the tiny border disappears into the background and it looks like the entire top is nothing but screen. Clever engineering there.

And the screen pops with a vibrancy and depth you rarely see on small laptops and Ultrabooks. With a resolution of 3200 x 1800, the images are deep and the text is sharp. Some may complain the higher resolution makes text too small for easy reading, but we didn't have that problem. We felt the high resolution made the text stand out from the background and be easier to read. If this resolution, which is higher than the MacBook Pro Retina Screen, is too much, some models of the XPS 13 family have screens running at 1920 x 1080.

Being smaller than other 13-inch Ultrabooks, we were happy the keyboard wasn't shrunk so much typing became a problem. The backlit keys are on the small size, but still provided large enough targets to type with relatively few errors. Sure, the Enter key may be smaller than on larger laptops, but the smaller keybed size meant your little finger is right there by it. Add in the large trackpad and control via the keyboard is no problem at all.

As like many new laptops running Windows 8.1, the XPS 13 offers a touch screen, with all the Win8.1 touch features enabled. The touch points have been adjusted so the higher screen resolution doesn't mean the active touch points have shrunk, and finger-driven manipulation worked with accuracy.

I've installed stock Windows 8 and 8.1 at least 100 times, and I've never seen tiles for Amazon and Kindle as part of a clean install. Can you explain why you feel Dell choosing to include these tiles is Microsoft's fault?