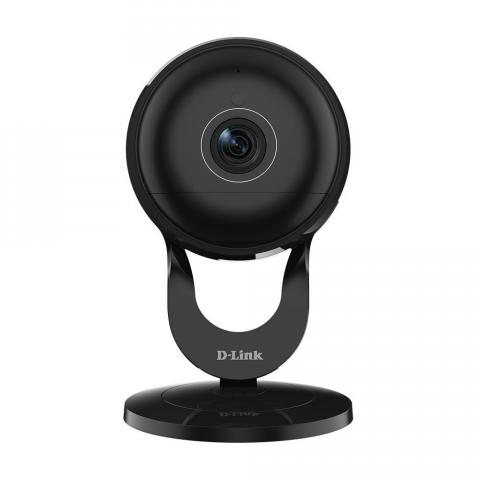 The ultrawide-view unit is easy to set up and use with the cloud, plus it shows the entire room. By James E. Gaskin
Tweet

THE NEW WAVE of high-quality video surveillance cameras hitting the market makes sense: Camera sensors cost less, Wi-Fi at home and in small businesses runs faster, and everyone carries a remote camera viewer in their pocket disguised as a smartphone. And the new D-Link DCS-2630L has jumped to the top of the heap by supporting simple setup, easy cloud interactions, and some software tricks to change a 180-degree fisheye lens into something more normal looking.

This is also another front for Taiwan-based D-Link Corp. as the company moves into the home and retail market spaces in a much bigger way. By the looks of this camera, the company has a good game plan and is making steady progress on several product fronts. For instance, read our review of the AC3200 wireless router covering all major frequencies and with bandwidth to support a batch of high-resolution video cameras concurrently.

Out of the Retail Box Experience

D-Link has really stepped up its box game the last several years, and the box holding this new Wi-Fi camera is no exception. Nestled inside hard foam cut to the circular camera case, the one-piece camera with attached stand looks like a gift. The power adapter and quick install guides and cards are in the box as well.

The once-maligned QR code has become an installation tool for multiple tech products. In this case, just snap the QR code with reader software, and the D-Link installation app appears, or is supposed to. In our case, the QR code didn't start an app. But a quick trip to Google Play and a search for D-Link found the app quickly, and we were able to set up the camera from there.

The app finds the camera and then starts searching for the nearest SSID. You can choose any of the listed SSIDs. Just to be safe, make sure your phone and new camera use the same Wi-Fi router.

Once linked to your Wi-Fi router of choice, set up a password for the camera itself. Yes, security-minded folks, each camera has its own password. Since you can always name your cameras and choose which one to connect to via a list, this won't force you to type crazy passwords on a phone screen. We added the password and the camera thought, and thought, and agreed all was well. It even set the time zone based on phone information.

You really need a MyDlink.com account to get the best use of this camera, so set up that free cloud service if you haven't already. If you bought any D-Link products the last few years you probably already have an account enabled.

Again, we searched for nearby cameras, this time to load our camera into the D-Link mobile app for later perusal. We added the password, which was then remembered by our Android phone, and soon we were watching video on our smartphone thanks to the D-Link cloud. The phone screen offers a way to connect remotely via the cloud, or locally via Wi-Fi. The lag time through the cloud is only about a second, which we thought was pretty good response.

D-Link is a little behind on supporting Windows 10, and Chrome doesn't support plug-ins from D-Link or anyone. We started out with a Windows 7 PC and Internet Explorer. Windows 10 live feed worked, but not the replay of recorded clips. The smartphone app streamed live video right away with no issue.

There's a slot for a MicroSD card (not included). The camera supports up to 128GB of storage on that card, which you need to capture recordings such as those triggered by the motion or sound detector. In the Settings tab of the control software, you can see Event Trigger Settings at the bottom of the screenshot. When Motion Detection is enabled, the camera will include five seconds before and after any motion that appears on the screen. A 128GB card can capture a full week of constant recording at medium quality and 5 frames per second. At the lowest resolution, you can hold nearly two months of video on that same card.

The middle indicator shows an ear because that's for Sound Detection. Yes, the D-Link Wide Eye (as marketing calls it) will trigger on sounds. More on audio later.

As with all streaming video, use will flood your network and make your router lights dance. The camera feed looks great in full screen, or you can keep a small window open to monitor an area. You can hear through the camera, trigger recording based on sounds, and even talk through it to whomever you're watching. Sound quality isn't great but is certainly usable.

Finding a recorded clip is fairly simple, which is good because there seems to be much more motion that triggers a recording than one would think, such as tree limbs and the like. Each day is broken into four-hour segments, and you can scroll through the saved videos to help find the right time to watch.

No more of those streaky videotape recordings like you see on cop show surveillance cameras. High-resolution video looks sharp and clear. D-Link likes to stress the camera’s image quality, and it should. And you can see at night or in the dark with the infrared LEDs to a little farther than 16 feet.

If you're old school or want to control every aspect of every detail of the camera, check out Advanced Settings. That opens a last-generation management utility that will satisfy tweakers at every level. D-Link was smart to hide this utility from consumers.

The camera is easy to set up, works great through cell phones, and the 180-degree view shows the entire room. For indoor surveillance, you can't get much better than the D-Link DCS-2630L at this price point.