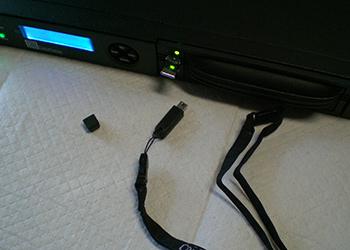 CRU DataHarbor offers a new backup appliance, but the hook here is appealing to cloud paranoia: There’s no cloud option, but a removable hard disk to take off-site for disaster recovery. By James E. Gaskin
Tweet

Resellers always need another backup option, because two-thirds of small businesses report they "need help" with backup. The other third are in denial. This backup appliance, the DataHarbor from CRU, aims at small businesses such as CPAs, medical offices, law offices, and others that fit under the 25-user CALs included with the software.

Out of the box, the unit feels like quality, as if the all-metal 1U chassis (14.25 inches wide, 17 inches deep) were carved from rock. The quiet unit can be rack mounted with included hardware, lay flat on a desk, or even sit on its side for a slim profile. Although the instructions say to look for an "accessory box" with the encrypted keys needed to run the unit, there isn't a box, but rather a bag, and the keys are mini-USB connector plugs that are darn near invisible wrapped up in their lanyards.

One key is internal, while two are provided for safety's sake. Without the key, the 256-bit AES encryption renders the removable drives useless, so don't lose those keys.

Two clutch-size black bags hold the removable drives, one marked "USE THIS DRIVE FIRST" because it's pre-formatted. The CRU DataPort drive, completely enclosed rather than screwed to a tray, slides in easily. Once the unit is powered on, the two-line, 32-character display announces "Mirror Status: Normal" and you can start the OS configuration.

Grab a keyboard, mouse, and monitor for setup, which starts in earnest with the typical WSS install. Get through that, and you then get to slog through downloading software and configuring each client computer (PCs and Macs are supported). Our lab machines, used in previous WSS tests, had to have all previous WSS software and utility files carefully cut away to work properly, slowing progress.