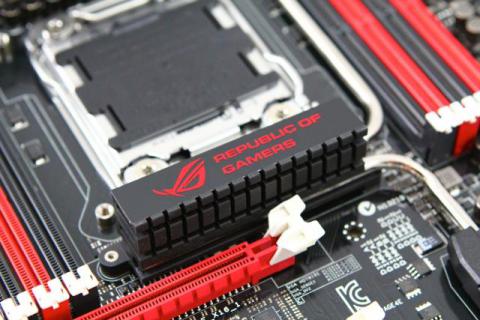 The bottom line for the ASUS X79 Rampage Extreme is this: many motherboards made today are very similar in their feature set and their options, not true with X79 Rampage IV Extreme as it breaks the standard mold and recreates itself as the absolute king of X79 motherboards and a Solid Editors Choice Product. By Elric Phares
Tweet

Well now that we know what board were working on lets start looking at what it has and what it can do.  The Rampage IV Extreme is the pinnacle of the ASUS ROG extreme gaming and overclocking offerings. With that we expect nothing but the best of the best for the power user in terms of features. When referencing that we can definitely say they did not skimp on the feature set for the extreme variant.

As we look at the layout we can clearly see that component placement was at the forefront of the teams design when cooking up the Rampage IV Extreme. Starting with connectors, there are many of them and most all of them or at least all we can concieve as being humanly possible were placed at the boards edge to allow for easy component connection and wire management without errant cables strung across the board for connectivity. The only connector we could find that will lead to a cable run issue would be the 6 pin PCIe connector used as supplementary power to the PCIe slots, and this is simply a by design issue which is the fact that the whole point of the connector is to give direct power without a long trace run and therefore this placement is all but unavoidable.

Here we see that this board even though being the high overclocker did not omit DIMM slots in favor of less strain on the memory controller and instead has a full 8 DIMM slots in place and with that spent extra time in the tuning department to ensure that all 8 DIMM slots could not only be populated but be overclocked rather highly to allow for maximum performance which is to us impressive for a lack of better words. The 8 DIMM slots can be populated for up to 64GB of memory with tested clock speeds up to 2600MHz as shown by some of the top overclocking staff with the ROG team. While we were impressed before I think its needless to say with this we are damn impressed as this level of detail to the performance of the board really is second to none.

The Storage side of things is rather interesting as well as we have our standard 4X PCH fed SATA II/3G ports along with 2x PCH fed SATA III/6G ports which deliver the newest and fastest SATA interface to date, and for even more connectivity we have the Asmedia controllers feeding a pair of ports near the PCH ports which support up to SATA III/6G speeds along with a pair of eSATA ports running the same. One thing to note is that unlike the other ASUS Channel based boards these boards utilize the Asmedia controller for higher performance rather than the Marvel chipset which supports ssd caching. This is important to note as ASUS performed some extensive market studies to find that primarily the users of the ROG based boards utilized at the very least a high speed boot drive or SSD and a larger storage drive for data and therefore would be less likely to utilize a SSD caching function and therefore they opted for the higher performing Asmedia controller for the best possible IO performance rather than a controller with caching capabilities as this would best fit the usage model of the ROG consumers. Another cool feature offered on the Extreme board amongst many of the ASUS offerings is the USB BIOS Flashback, which is a few step easy process to flash the bios without even entering the bios screen or worrying about booting from a flashing program.

Here we look at the power components that bring the Extreme to life and once the heatsink was removed we saw everything we needed. This board employs a 8+4 pin connection for the EPS CPU power feed, and from previous overclocking sessions we can definitely say that a single 8 pin is perfectly fine for most cases and even the most extreme overclocking sessions should be easily well fed with the supplemental 4 pin plugged in adjacent to the 8 pin. The PWM of the Extreme employs ASUS' new DIGI + II Extreme power components which take the DIGI + design we are all familiar with and push it to new heights with its enhanced abilities to actively throttle and adjust according to load which meas the power components can actually swap load back and forth to allow load to be balanced between the components. This may not seem like much but when considering that components utilize more power as temperature rises if the components can switch on and off actively to balance load and thermals it stands to reason that the power circuit will be more power efficient and also more stable when pushing extreme overclocks with its digital design. Add on top of this that the Extreme board uses only top quality components in its DIGI + II circuitry and we think we have a pretty beastly combination.

As we see the board has many connectivity options including a Bluetooth antennae which should help with interfacing with Bluetooth devices along with a mobile phone which could allow remote overclocking and control via the ASUS iDirect feature. Also the LAN port is fed by none other than a Intel Network controller which is chosen for the fact that many enthusiasts and power users request an Intel NIC because of its excellent performance and stability.  Also let us not forget the ROG Connect USB port which enables connection of a laptop or other PC to allow remote real time monitoring and control of the ROG board for the best Overclocking experience. There are many high speed USB 3.0 ports as well which support ASUS' USB 3.0 Boost function which enables substantial increases in USB transfer speeds via the AISUITE software by enabling for a standard boost mode which is a mild boost in speed all the way up to the UASP mode which on supported devices can really make some amazing increases transfer speed on USB 3.0 devices. More about USB 3.0 boost and supported devices can be found here.

MSP Sued! Are You Ready?
END_OF_DOCUMENT_TOKEN_TO_BE_REPLACED