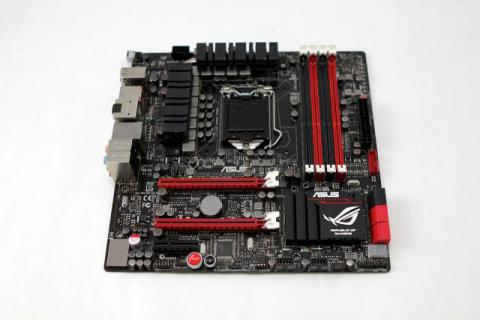 The Maximus V Gene is the epitome of small FF motherboards and offers no sacrifice looks and performance worthy of an Editors Choice here on Motherboards.org the Motherboard HomeWorld! Thanks for reading. By Elric Phares
Tweet

Here is where we delve into some of the more advanced functions for the ROG Series as a whole and the Maximus V Gene board that makes it a good buy and a must have for the extreme users. This board shares many with previous gen boards but many of them bear repeating as they are awesome features that we really see advantages for in real world usage.

ROG Connect allows remote monitoring and management of the host system via a USB attached client system used to not only monitor but even real time overclock the benchmarking system which can be a life saver if running a benchmark at the ragged edge and having the need to adjust the clock down slightly during a more stressful part of a benchmark. The ROG Connect feature also allows overclocking of the Graphics card as well so it really is an all in one solution for the most part for the ROG board and user.

With the Z77 we get a new version of the Lucid Virtu offering now labeled Lucid Virtu MVP.  The MVP option has many new improvements and advanced designed to allow a new mode of vsync allowing much higher than the standard refresh rate (usually 60Hz) and still being able to avoid screen tearing via a series of intense calculations made in real time to ensure partial frames are never rendered and dropped in favor of higher FPS with smooth gameplay.

Also there is the "œHyperFormance" which allows rendering of frames on the iGPU so that the Discreet GPU just does the heavy work or performance side of things keeping the Discreet high performance card free from the menial tasks to allow for maximum performance.  This may sound confusing or overly technical and that's really because it is.

Upon testing we did notice that in benchmark apps such as 3DMark11 the performance could be seen improved but the performance in real world gameplay was a mixed bag and seemed to actually render lower FPS instead of the previously told boost we were expecting. This is something we are still actively testing but we think the Virtu MVP software still needs some time to mature before its ready to be called a complete solution, but I will admit its an interesting implementation and we are very interested to see how it will perform as the technology improves and gets better over time.

Here we see the previously mentioned pin header. This is made for the mSATA/mPCIE card we mentioned previously. This is an add on device made to support both a mSATA SSD and also a mPCIE device such as a wireless LAN card to allow the Maximus V Gene to expand its capabilities beyond normal connectivity and even omit storage drives from the SATA ports completely which could make for some very interesting cabling options or a almost completely wireless system.

Here is the card in action.  In this image we do not have the mSATA or mPCIE devices installed but this should give an idea of how it will work and the fact that with this implementation you now can have a high speed storage device and a wireless LAN device all ready to go and as said previously pending that need for large capacity is not an issue we could install a system with no SATA cables whatsoever.

Here we have a hidden little secret on the board as the BIOS shows just a gamer preset option but when a jumper is placed on 2 of the 3 pin header above it activates "œLN2 Mode" which suddenly shows 2 more preset profiles in the BIOS along with other board tweaks made specifically for Extreme subzero benchmarking. This board may be a ultimate gaming board but we all know you can take the board away from the overclocking but you cant take the overclocking away from the board as the ROG team always seems to find a way to hide their little tweaks here and there to make sure the users can get the maximum performance from ANY ROG model whether Extreme or Gene.

The SupremeFX III feature is what many will say is the ultimate audio solution aside form a discreet card. This is accomplished by creating an island of PCB with just the audio components with only very small connections to the main PCB via filtering caps to ensure there is the least amount of likelihood possible that audio interference will ever make its way into what you hear. This effect is enhanced with LED's to shine through and create a red stripe indicating the split in PCB between the main PCB and the audio PCB.

The GO button is a pretty cool feature as it loads a preset "œsafe" profile which will allow booting if you run into a no post issue.  This could be especially helpful if a very bad overclock is entered and its so far outside of stability that it just simply will not post at all and this also helps get back into bios without completely clearing everything out as well.

Here we see the enthusiasts slot layout, the Maximus V Gene is setup with dual x16 mechanical slots and a x4 slot colored in black. The red x16 slots are PCIe gen 3 capable and operate at x8 with both slots populated. This allows for a 2 way SLI card set pending the cards are equipped with dual slot coolers. This does mean that triple slot cooled cards will only fit in a single graphics card. The x4 slot is a good inclusion as it allows installation of a PCIe SSD such as a revodrive or other high performance controller without dropping a single card to x8 lanes.