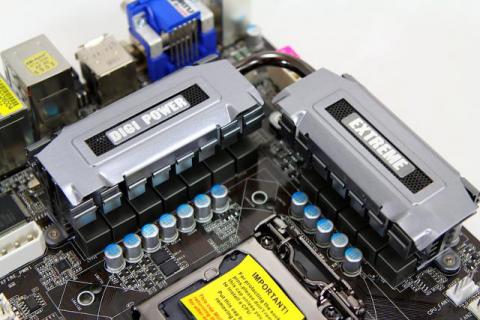 The next impressive feature of this chipset is that it also supports Intel’s processor imbedded graphics technology. This is a great feature for those that are on a budget. It makes having to purchase a discrete graphics card unnecessary. By B. Ramirez
Tweet

Now that we’ve gone over the specific features of the chipset let’s see what ASRock has added. This new motherboard is compatible with all of the current 1155 Core i7, i5 and i3 processors and features full support for up to 32 gigs of DDR3 memory in dual channel configuration. This motherboard is also capable of memory overclocks up to 2133 MHz.

ASRock incorporated the use of 3 PCI Express x16 slots that operate in the following capacity: single at x16, dual at x8/x8 and the 3rd at x4 mode. This means that only one slot is a true x16 slot for graphics. With this configuration anything more than a dual graphics card solution isn’t really going to be feasible. The 3rd PCI Express slot just won’t have the bandwidth to make it good enough for use in a triple Crossfire or SLI configuration. This board isn’t even bundled with a 3Way SLI bridge.

This board does have a very nicely populated rear I/O panel. Being that this board does support processor imbedded graphics there are all 3 primary video outputs on the rear I/O. And in case you were wondering there is also a 4th; display port is also included on this board. That makes this board extremely versatile which means that you will be able to get the most from your imbedded Intel graphics. There are a total of 4 USB 2.0 ports and 2 USB 3.0 ports. You will also find a Firewire and an eSATA port featured in the rear I/O. There is also a gigabit LAN port and your analog audio ports. Another nice feature is that there is also an Optical S/PDIF out along with a Clear CMOS switch.

With this board you will also have plenty of storage options. There are a total of 4 SATA 3.0 ports. These ports are capable of the 6 gig per second bandwidth. This board also has 4 SATA 2.0 ports. These use the slower 3 gig per second bandwidth. This gives this board a total of 8 SATA ports. With this many SATA ports there are many different RAID configurations that are available. In fact this board supports RAID 0, 1, 10, and 5. And we need to remember that this board also supports Intel’s Rapid Storage and Smart Response Technology. These are the types of things that enthusiasts like to see. With SSDs becoming less expensive and the emergence of Intel’s Smart response Technology, the user now has quite a few options for how they want to configure their storage devices. These technologies are improving the speed with which we can access information as well as start and open software applications. These technologies also have drastically improved the speed at which the system is able to boot into the OS.

Another amazing feature of this board is its implementation of a fully graphical UEFI BIOS interface. This simply means that the BIOS now will operate very similarly to an OS. You have full use of your keyboard and your mouse. The interface is also very nicely laid out. Each area is broken into tabs that can be accessed by clicking on their icons at the top of the screen. This new BIOS also features support for 3TB hard drive booting. The previous generation was limited to no more than a 2TB hard drive. So now if you want the option of using one of the new 3TB hard drives as your primary boot drives it won’t be a problem. There won’t be a need to partition it either. This is going to make upgrading to the larger storage devices a much easier process.

This board also supports THX TruStudio PRO audio. If you haven’t heard this yet it is reproduces really good sound quality. ASRock has been using this audio chip for a little while now and after trying it out I can see why they’ve kept it. Music sounds very clear and crisp without any of the usual distortions that you would expect from onboard sound. Movies audio is also very nicely reproduced. In a surround sound speaker configuration it really does give a true theater felling. You really do need to have quality speakers though to fully enjoy the onboard sound. In games the onboard audio really shines. Everything sounds very realistic and sharp sounds are very accurately produced. Everything from gunfire to dialogue sounds great with the THX TruStudio Pro.