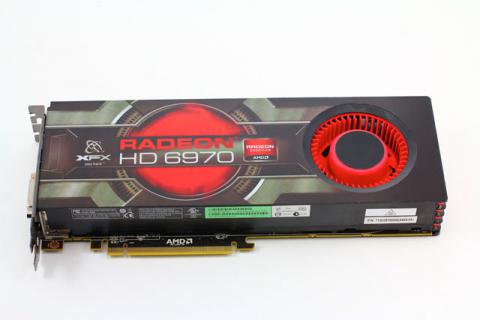 Today marks the day of the all new AMD 6970 video card launch and we have a full review of the XFX HD RADEON for you to check out. By Elric Phares
Tweet

AMD has included two graphics engines on a single chip with the 69xx series chips with dual rasterizers, Tessellators, Hierarchical Z, Vertex and Geometry Assemblers and Ultra Threaded Dispatch Processors. AMD has also moved from the 5D architecture of previous cards (including the recently released HD 6870) to a VLIW 4 architecture with up to 1536 Stream Processors per card.

If you remember the HD 5800 series that preceded this architecture the chip had 1600 SPs split into 20 blocks of 16 SPs each (SIMDs). Each block could do four simple operations+ special function so in essence, AMD called their architecture 1600 SPs. With the HD 6970 the chip has a maximum of 24 SIMDs with blocks of 16 ALUs per SIMD.

The VLIW4 thread processor is a 4-way co-issue processor with all stream processing units having equal capabilities. If a block is used for a special function operation it now occupies 3 of 4 issue slots. This design allows for 10% improvement in performance/mm2 than the previous generation, simplified scheduling and register management and extensive logic re-use, providing a more efficient architecture than Cypress.

AMD has upgraded the Render back-ends of their new Cayman architecture with a coalescing of write ops. 16-BIT integer operations are now 2x faster than Cypress. 32-bit FP (single/double component) ops are 2-4xs faster depending on the operation. The of Z/Stencil units is 128 and they have 96 texture units and 32 color ROP units on the 6970.

One of the issues that all modern graphics architectures face is the need for computational efficiency. The Cayman has asynchronous dispatch capabilities meaning it can execute multiple compute kernels simultaneously and each kernel has its own command queue and protected virtual address domain. The dual graphics engines also translate into dual bidirectional DMA engines for faster system memory reads and writes, with direct fetching to LDS and faster double precision ops (1/4 SP rate versus 1/8 on HD 5870.

One of the things NVIDIA has been pushing with their GF architecture has been that their Tessellation performance is much higher than AMD’s. AMD addresses this in Cayman with dual-rate geometry setup, off-chip geometry buffering and their 8th generation tessellation engine. As each graphics engine has their own tessellation unit the Cayman can process two primitives per clock and has 2x transform and backface cull rate.The Cayman has up to 3x performance of HD 5870 and also has two rasterizers with up to 32 pixels per clock.

Cayman introduces a new form of anti-aliasing to the AMD chips, Enhanced Quality Anti-Aliasing.EQAA uses the 8 color samples from MSAA and uses up to 16 coverage samples per pixel. If you might remember NVIDIA introduced Coverage Sample Anti-aliasing a while ago with their cards. The number of color and coverage samples can be independently controlled with custom sample patterns and filters. Its compatible with Adaptive AA, Super-Sample AA and Morphological AA which is a post-process filtering technique accelerated with DirectCompute.

OK, now for the big one PowerTune. In previous cards the card either delivered full power or idle power depending on the load. While this was good the Green initiative and the need to cut power costs has forced companies like NVIDIA and AMD to come up with power-saving technologies. AMD has included an integrated control processor that monitors GPU activity in real-time and dynamically adjusts clock to enforce TDP maximum. It provides direct control over GPU power draw instead of clock/voltage tweaks The Overdrive utility allows you to set the maximum power limits of the HD 6970 or HD 6950 from 20% lower than default to 20% higher than default. The game power draw is typically 190W on the HD 6970 with 20% increase that goes to up to 250W. Idle power draw is 20W.