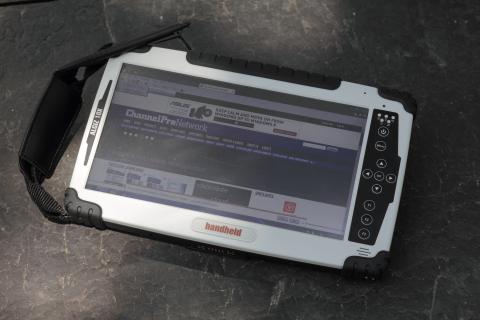 The 10X isn’t really intended to be someone’s primary system for all things computing, but it might be the perfect tool for handling tasks out in the field. By John McCormick
Tweet

Changing directions from our more typical notebook/tablet reviews, we’re looking here at the Algiz 10X ruggedized tablet. Not at all targeted to the home or typical business user, this tablet follows in the footsteps of its predecessors, being designed for harsh environments where exposure to severe elements like water, sand and dust, and where being dropped is a likelihood, is the norm.

The 10X isn’t really intended to be someone’s primary system for all things computing; instead, it’s for handling the basic tasks needed by people out in the field: capturing data, making notes, performing functions related to warehousing work, etc…. Most of these things aren’t CPU intensive, and for these what’s more important is readability of the display in a variety of conditions, and battery life.

Layout
The Algiz 10X, with a case size of 10.8 inches by 6.7 inches by 1.2 inches, has a 10.1-inch widescreen 1366x768 resolution LED backlit screen that provides a level of brightness that can compete with most outdoor environments. Its built-in ambient light sensor automatically adjusts the brightness for the current lighting levels of the surrounding environment. The display is also a touch screen using single-touch resistive technology, which responds to both a finger as well as the included fine-point stylus.

Down the right side of the front surface is also a set of physical buttons to power the unit on; access the system menu; arrow keys which can be used to scroll windows and the system menus; and three function keys that each can be programmed to activate any two applications the user desires based on whether the function key is quickly pressed and released, or if the key is pressed and held for a longer time. Located above all these buttons are a set of status LEDs for indicating power mode, storage status, radio status, battery status and GPS status. 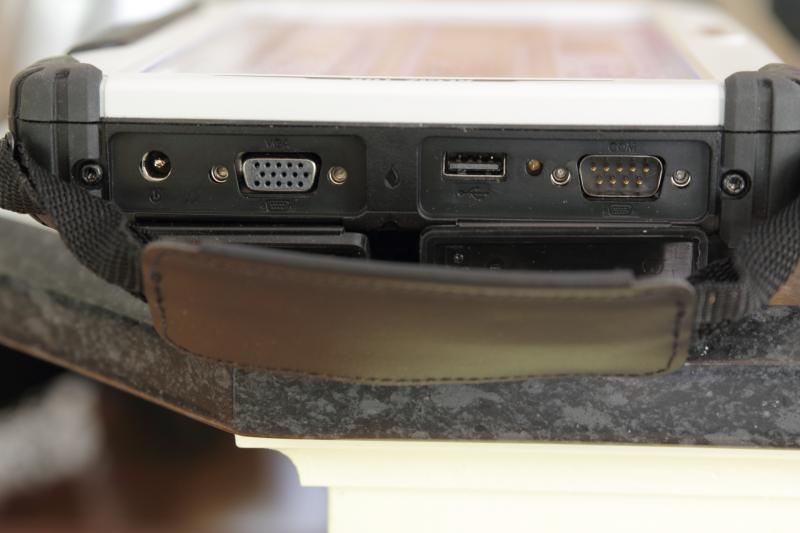 Down the left side of the unit are two water-tight rubber tabs covering the power connector, VGA display port, USB2 port, and RS-232 serial port. The left side also sports the adjustable hand strap.

The right side of the system, also under weather-proof caps, has the wired Ethernet port, external speaker/headphone jack, another USB 2.0 port, SIM card slot for 3/4G access, and a Micro SD slot for augmenting the built-in SSD storage.

The back of the unit provides a storage slot for the stylus, and a secondary battery option.

At the bottom of the unit is a set of contact pins for docking with a vehicle cradle which provides DC power, two USB ports, one 100baseT LAN adapter, and a GPS and GSM antenna system.

On the Inside
The 10X is powered by the Intel Atom N2800 1.86 GHz processor, a common processor family used in many mobile devices. The N2800 has an integrated GPU for video support. Four GB of DDR3 memory is included, and Phison Electronics’ 128 GB SSD (model #SSE128GPTC0-S81) drive provides permanent storage.

Two battery packs power the 10X, one internal and one external. The external battery is hot-swappable, so when equipped with a multiple external batteries, you can keep the 10X running indefinitely without having to shutdown to swap batteries. 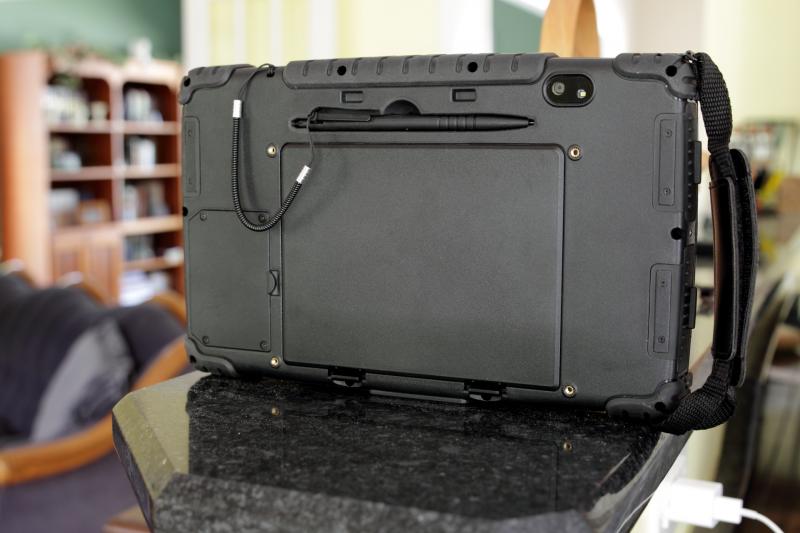 For the operating system, the 10X comes with Windows 7 Ultimate edition 32-bit edition.

ICYMI: Our Channel News Roundup for the Week of January 13th
END_OF_DOCUMENT_TOKEN_TO_BE_REPLACED