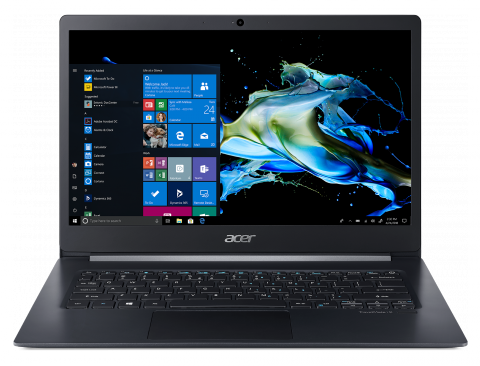 With its light weight, horsepower, and executive caché, this notebook joins the ranks of the upper class. By James E. Gaskin
Tweet

THE BUSINESS AND EXECUTIVE laptop market includes some outstanding computers, all of which are constantly being upgraded to vie for the title of thinnest and most powerful in the room (just like the executives using them!). Many feel the machine to beat is the Lenovo ThinkPad X1 Carbon.

The Acer TravelMate X5, a new hat in the ring, deserves to be in this discussion now too. It’s thin (0.6 inches), light (2.16 pounds), powerful (8th Gen Intel Core i7 processor and 16GB of DDR4 RAM), and executive-chic with a dark-gray magnesium-lithium-aluminum alloy chassis highlighted with a lighter-gray hinge bar. Touting a battery that lasts up to nine hours, the TravelMate X5 should keep going as long as the exec does.

Compared to the ThinkPad X1 Carbon we tested in the lab last year, the Acer TravelMate X5 is very slightly wider and deeper (neither of which will bog down a busy exec powering through meeting after meeting), but also very slightly lighter. Like others in this product category, the Acer has no Ethernet port, but includes fast Wi-Fi (MU-MIMO 2x2 802.11ac), Bluetooth 5.0, an HDMI port, some USB 3.0 and Type C ports, and an optional dongle that supports up to three 4K external monitors. We didn’t test the dongle, but the Intel UHD 620 graphics should drive them well, and it includes DirectX 12.

The nonretail box holding the Acer TravelMate includes the laptop, a small two-pronged wall-wart power unit, and a thin Setup Guide pamphlet. A clean desktop appears in less than 10 seconds after power-on, with only the Recycle Bin and FireFox browser icons onscreen. Thanks to Microsoft, there’s still a bunch of gunk in the pop-up Start display, including two (two?) Candy Crush versions, a racing game, a mystery game, and so on. Business tools include Skype for Business Certified, Evernote, and a Norton Security Ultra trial subscription.

Configuring the fingerprint reader consists of starting the utility and pressing on the small reader multiple times to grab your prints. After that, it takes about 10 seconds from power-on through fingerprint scan and you’re ready to work.

The keyboard is as good as any competitor except perhaps the ThinkPad. No other vendor has figured out Lenovo’s secret for such long key-travel on such thin laptops. But typing at speed on both shows little difference. The Acer keyboard will allow fast typists to keep fingers blazing.

ChannelPro 5 Minute Roundup for the Week of July 26th, 2021
END_OF_DOCUMENT_TOKEN_TO_BE_REPLACED

Jabra PanaCast Review - Get Your Huddle On
END_OF_DOCUMENT_TOKEN_TO_BE_REPLACED