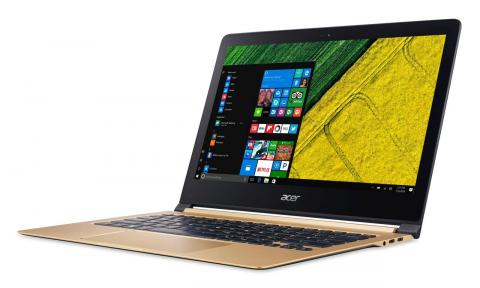 Like a fashion model, the 0.4-inch-thin Ultrabook makes svelte cool and eye-catching.

THIN IS IN FOR LAPTOPS just as much as for fashion models. Currently, there’s no laptop thinner than the Acer Swift 7, which is less than 10 millimeters thick. Since we’re American, we had to look that up: 10 millimeters is about four-tenths of an inch, or 0.4 inches tall. And like a fashion model, the Swift 7 makes thin very cool and eye-catching.

The retail box looks like the laptop itself: matte black with gold ornamentation. For the box, that means the lettering for Acer and the Intel Inside logo and other bits. For the laptop, it means an executive-magnet black with dark gold lettering and trim. The matte-black lid has a thin roughed-metal strip at the top to help grab the unit. Smudges on the black finish can hardly be seen from more than 2 feet away.

Gold is the dominant color of the keyboard surface, set off by black chiclet keys. The blue Intel Inside Core i5 label looks positively garish. A huge trackpad, 5.5 x 2.5 inches and slightly recessed, covers about half the space below the keys. There are no separate buttons, but a positive click response lets you know you’ve clicked the correct part of the trackpad to emulate right and left buttons.

Windows 10 Home is, well, Windows 10 with added bloatware that Microsoft believes is important for consumers. Acer’s additions were limited mostly to the Acer Care Center set of utilities that may actually have value to some users. The extra games on the pop-up Start menu we have to blame on Microsoft. What exec or fashionista interested in this UltraThin (Acer’s tag) laptop will be excited by Farmville 2?

The 13.3-inch screen sports full HD support: 1920 x 1080 pixels. A fairly wide half-inch bezel makes us think there could be a version of this unit in the future with a 14-inch screen in the same chassis. As it is, the screen is bright, clear, and sharp. It lacks the super-high resolution of some other recent high-end laptops, perhaps to keep the cost under control, but is a pleasure to use.

Chiclet keys are the norm for thin laptops, and the Swift 7 is no exception. Typing feels as good as can be expected for keys with no space in the laptop to travel. That said, this keyboard is full size so finger contortions aren’t necessary.

The 7th generation but lower-powered 1.2 GHz Intel Core i5 processor, along with 8GB of LPDDR3 RAM and a 256GB Kingston SSD, boots fast and works fairly well. It’s not a gamer machine, and perhaps not as fast other i5 laptops, but all standard knowledge worker software will run fine without hindering workflow. If you want an i3 to reduce the cost or an i7 to pump performance you’ll have to wait until Acer updates this product line, or try one of Acer’s many other laptop choices.

Daily Use and Envious Looks

It’s rare to have people stop and ask what laptop you’re using, but that happened with the Acer Swift 7. This looks like the original Movado watch with a black face and the one gold circle for the number 12—expensive minimalist.

The unit is too light for the base to stay in place when you lift the lid, so Acer added an indent for a fingertip to hold it down. Never worked for our fat fingertips, but it looks nice.

Wireless speeds were impressive: The 802.11ac MU-MIMO signal pegged our Spectrum ISP feed at 118 Mbps out of our 100 Mbps “official” feed (our segment must not have much traffic yet). And Wi-Fi is it, since Acer doesn’t include an Ethernet port or USB dongle.

When we hooked up an external monitor, the Swift 7 automatically matched the higher resolution of 2560 x 1440. Windows 10 may have issues, but dual-monitor support is far easier than it used to be. With no room for an expansion port plug, the dongles will probably stay on the desk for those times you need a bigger keyboard or monitor. When plugged in, only one port is open, so if you use an external monitor you’ll need a Bluetooth keyboard.

The included webcam is sharp and clear and records voices well. Its resolution is only 1280 x 720/30 fps, not full HD like the monitor. That said, those who wish to vlog have all they need here. Background sounds intrude a bit, as with all built-in laptop mics, but when speaking the voice captured sounds full and up front. Speakers are better than expected with so little speaker and resonance room, but it’s still Ultrabook sound, just better than most. Use earphones to enjoy full, rounded sound for streaming videos.

This laptop seems to be the thinnest on the market now, a testament to good design and engineering. And the black-and-gold color scheme screams executive suite. If we were putting a laptop in an ad for a Mercedes, it would be this one.

The Acer Swift 7 will not thrill geeks or gamers, because really thin means thermal trade-offs, limited ports, and a higher price tag than the specs imply. But it will thrill the executives and mobile workers who prize excellent design, light weight, and watching eyes turn green with envy from those with laptops not nearly as compact or cool as the Acer Swift 7.

Jabra PanaCast Review - Get Your Huddle On
END_OF_DOCUMENT_TOKEN_TO_BE_REPLACED