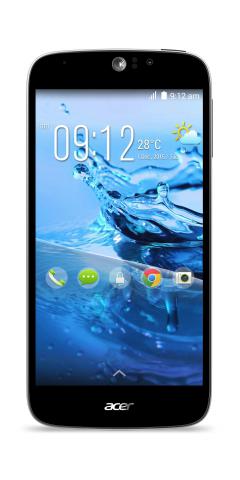 Battery life was good but physics dictates you can't have a dense, long-lasting battery that is light as a feather. By James E. Gaskin
Tweet

We regularly get packages from Acer, but the latest package was too tiny to hold a tablet, laptop, desktop, monitor, or all-in-one PC. When we opened it, we learned something: Acer makes smartphones. In this case, the Acer Liquid Jade Z Android smartphone.

When we pulled the unit out of the box we assumed the battery had yet to be installed. At 3.8 ounces, the phone feels improbably light. At about half an inch thick, it’s like holding a photo of a phone printed on heavy paper rather than a real phone.

But it is a real phone, and a pretty good one at that. Our model comes with 2GB of RAM and 16GB of storage. The 5-inch screen seems to cover the entire surface side to side, with 720 x 1280 bright pixels in an IPS (in-plane switching) screen for a wider viewing angle. The Gorilla Glass surface feels slightly different than that on other phones—somehow slicker and thicker—but that might be our imagination.

The screen and high pixel density combine to display TV and videos nicely. No lag or ghosting, ensured by the fast Wi-Fi (29 Mbps download speeds per SpeedTest.net) as well as the high-quality screen.

We found three things of interest when examining the other side of the Liquid Jade Z. First, the back itself feels like carbon fiber or industrial plastic. The etching makes it easy to grab and hold the phone to the point where we didn’t miss having a case. It never felt slippery. We suppose the Gorilla Glass adds some extra protection against breakage, but we couldn’t bring ourselves to drop it and test that theory. And a case is a good idea, anyway.

Second, the porthole-type camera housing protrudes slightly from the back. The round shape is not common, and the size helps to explain the wide F1.8 aperture, which is far more open and therefore better in low light than most phone cameras. Hiding inside is a 13-megapixel sensor that does a good job with photos of all types. There’s a huge range of camera settings and capture modes included, as well as the “Magic” photo icon. Effects are included, from mono to sepia to negative to aqua, if you prefer to modify photos before posting them to Instagram (Figure 2 Capture-1_photo-effects). There’s also a Beautification setting, Bright Magic, picture with sound, Presentation, and even a Gourmet setting if you love to document your dinners. The zoom slider works well, and you can touch the screen to focus the camera on that spot, such as a face slightly behind another object.

Finally, at the bottom, you can see the “dts” logo (Digital Theater Systems) above a round speaker. Yes, Acer boasts 24-bit, 192 kHz sound and an HD speaker. Can we say the sound is better from this phone than most others? Yes. Is it good sound? No, because the speaker’s vibrating surface and resonance area are far too small to make “good sound.” Does music sound great through headphones or the enclosed, rubber-tipped earbuds? Absolutely, and even better through an external speaker.

Running Android 4.4.4, the Liquid Jade Z features all the typical Android/Google apps and programs, along with a few extras. Acer included the same suite of cloud products it bundles with its computers and tablets, including abDocs, abFiles, abMusic, abPhoto, abVideo, and Acer Portal. These tools work well enough for storage and sharing with individuals or families, but they aren’t well suited for professional use (very small companies excepted).

Polaris Office 5 comes with the phone for those wanting an office productivity suite without paying for Microsoft software. Other interesting additions are Flashlight (that shines, blinks, or sends an SOS), and an FM Tuner that needs the earbud’s cable to act as an antenna. The sound was decent listening to FM radio, but movement resulted in the signal fading now and then based on local interference. The Sound Recorder works but gets a fair amount of room noise. It has Normal, Meeting, and Lecture recording modes, however, so capturing sound from all around becomes a strength.

Bloatware? Some, including 50 Free Games!, Puzzle Pets, and Real Football (meaning soccer). We’ll let you decide if the Twitter and Facebook apps are critical features or bloatware.

If you’re 25 or younger, you may care most about the rear-facing camera. The 5-megapixel camera includes all the same image modification tools as the front-facing camera. Alas, the Beautification mode smooths some details but doesn’t work magic.

Battery life was good but physics dictates you can’t have a dense, long-lasting battery that is light as a feather. At the end of a normal day, the battery was down to 65 to 70 percent. After 1.5 hours on the charger, it was back to 100 percent.

Texting was as accurate as can be expected since we don’t have pointed fingers like youngsters do. The autocorrect wasn’t onerous, and the phone filled in apostrophes and capital letters beyond just “I” and the first word in a sentence. We had trouble receiving group texts from iPhones (iOS 9’s fault?), but all else worked well.

Oh, yes, the phone part. Does the Liquid Jade Z make and receive quality calls? With wireless carriers today, quality is too much to ask, but this phone does what it can and conversations were clearer than with most phones we’ve used. One nice touch: It vibrates when a call connects, so you’re ready when the other person starts speaking.

Everyone who handled this phone said the same thing: “Wow, this is light.” It is light enough to sit in a shirt pocket without pulling the shirt askew, and thin enough to feel good in the hand, even with the 5-inch screen. Creating a phone with a large, bright screen that’s lighter than any other phone we’ve tried says great things about Acer’s phone division. The company’s new Liquid Jade Z phone should be welcome in any pocket.