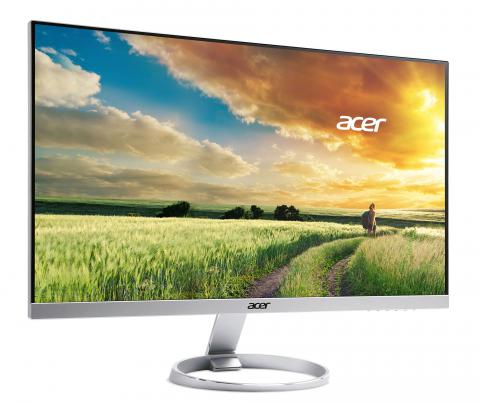 Treat your graphics-wielding clients with a monitor that packs a ton of pixels and sounds good to boot. By James E. Gaskin
Tweet

It’s amazing how your eyes get used to an old, gradually dimming monitor. You only realize how weak your old monitor has become when trying out a new one. When we fired up the new Acer H257HU we immediately realized our old monitor must have suffered through a recent dust storm. The Acer was so bright in comparison we reached for sunglasses.

Targeted to uses and job roles in which screen quality matters, such as gaming, watching movies, or working with graphics or video, the 2560 x 1440 resolution packs a ton of pixels into a stylish frame. Even the sound is good on this monitor.

Setup and Configuration
At only 25 inches the H257HU is relatively small for a WQHD (widescreen quad high definition) monitor, and it’s also thin with its "bezel-less" design. Only a slim silver frame holds the screen, so when the monitor is turned off it looks as if it completely fills the space. It doesn't quite, but the quarter inch or so of black space between the image and the frame disappear from notice quickly. 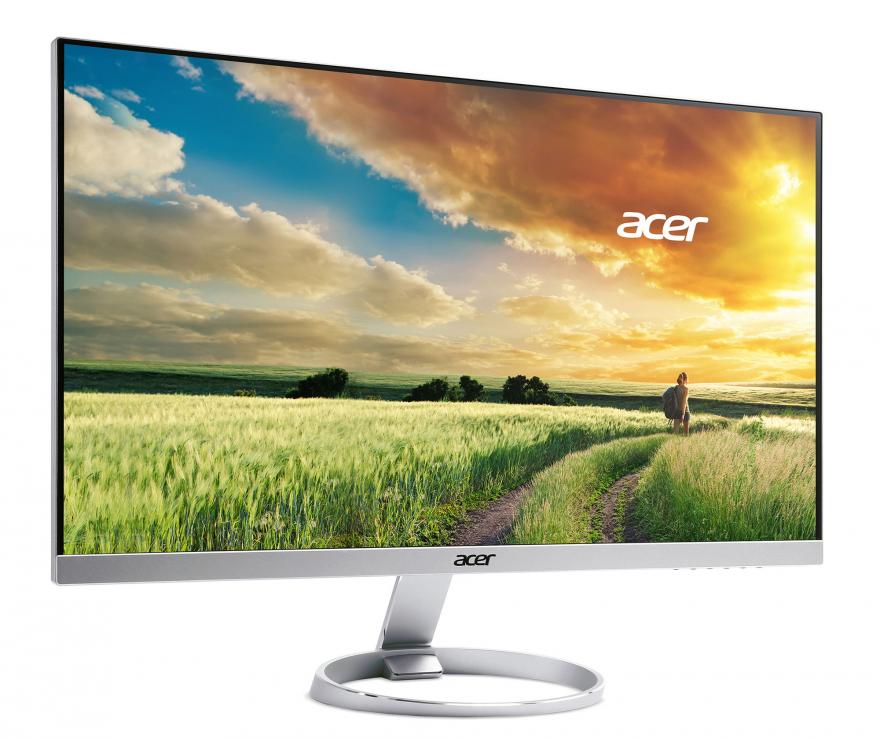 The round silver base with a polished slanted edge looks like jewelry rather than a stand. Tilt adjustment ranges from -5 to 15 degrees, but there's no height adjustment. Luckily, the base is small enough that you can slide a physical book (remember those) underneath it to make it higher if necessary. Our testing desk return, along with the tilt, positioned the monitor at a good working height and angle.

Setup was a snap. Simply hook the vertical stand section into the round base, finger-tighten the screw, then slide the monitor onto the top of the stand. Then plug in the video cable. Done. 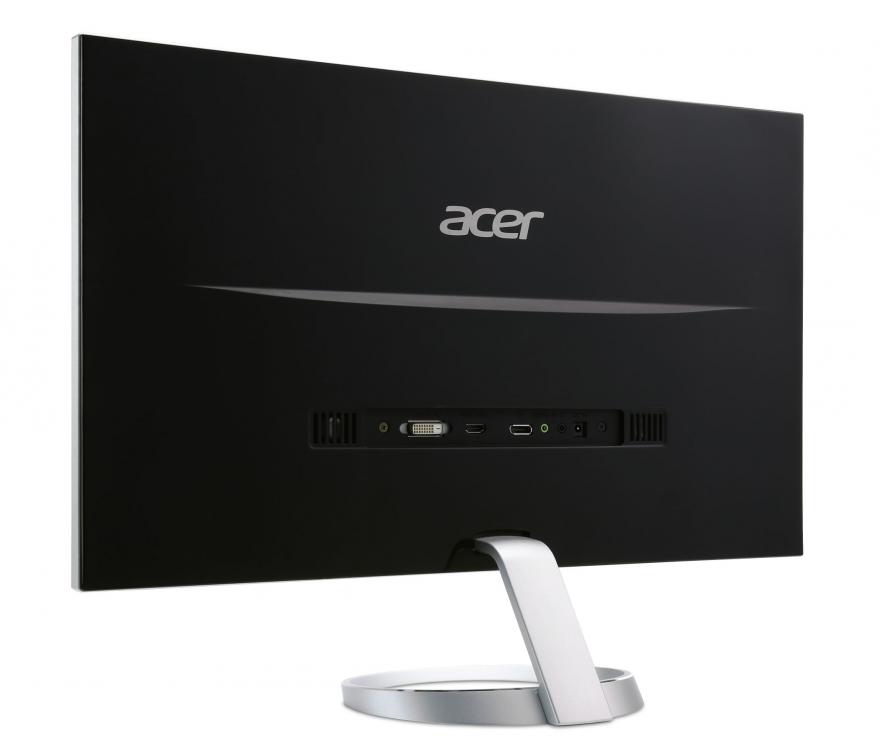 Looking at the back of the monitor, you might realize something is missing: the VGA connector. The days of the ubiquitous 15-pin VGA connector are officially over, since no monitor we've seen lately can push more than 1920 x 1200 resolution over those 15 pins. On this Acer H257HU there are three options for linking the monitor to the computer: DVI, HDMI, and DisplayPort. Acer includes all three cables in the box, which isn't always the case. So thanks, Acer. 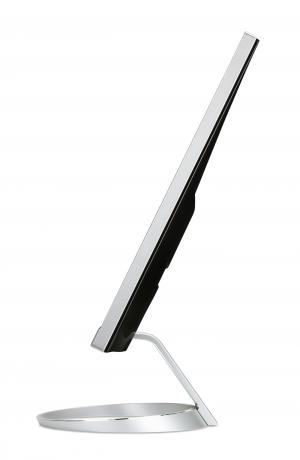 Working Brightly
As mentioned earlier, when the monitor powered up our eyes were almost overwhelmed with brightness and clarity. Acer coined three terms to explain its new monitor technology. Acer EyeProtect, the umbrella term, includes Acer Flickerless technology via stable power delivery while Acer ComfyView limits reflections from the monitor surface. No cutesy term was coined for the low-dimming technology to reduce eye fatigue.

No matter the marketing, the effect is surprisingly good for a monitor of this size and price point. The IPS (in-plane switching) technology provides a wide viewing angle, and the brightness is consistent to each edge and corner of the screen.

Letters are sharper, colors are deeper, and videos flow smoother than other 1920 x 1080 monitors. It’s also as good as or better than some of the more expensive monitors we tested over the past year. Whites are pure white across the screen. Working all day on this monitor never gave us the feeling of dry eye or strain.

Acer also upgraded the sound with its "Built-in DTS Sound" that claims to boost bass and heighten loudness and speech without distortion. These are the best speakers we've heard on a monitor, ever. While Acer gets a little effusive when it claims how thrilled gamers and movie fanatics will be with the sound, don't blame the monitor for the marketing hype. Every gamer and movie fanatic we know uses high-end audio, and none of them will unplug their home theater with subwoofer for these speakers. That said, the sound is better than most users get from a pair of small external speakers.

Place the monitor against a wall to get good sound reflection. A headphone jack is included, which isn't standard on many monitors, so real headbangers can plug in and bang without driving coworkers crazy.

Summary
Treat your eyes right and improve what you look at all day with sharper letters, a brighter screen, and far less flicker. In other words, upgrade your office with the Acer H257HU LCD monitor and smile at the better sound and outstanding picture.

Kaseya Acquires ConnectBooster
Oct 13: Your RMM Is Your Most Important Security Tool – 5 Tips To Reduce Risk and Grow MRR
END_OF_DOCUMENT_TOKEN_TO_BE_REPLACED