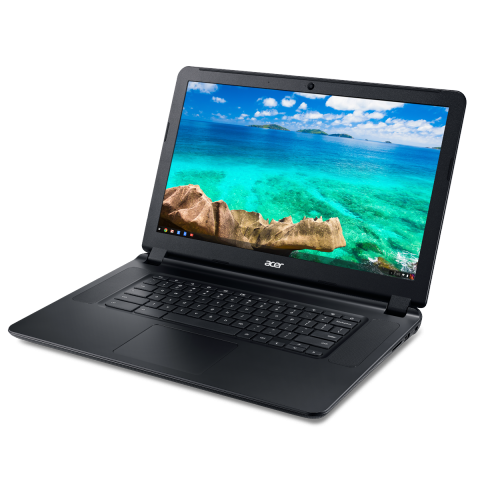 With a 15.6-inch screen and Core i5 processor, Acer’s “Chromebook 15” looks like a business-class laptop, with a comparable price tag too. By James E. Gaskin
Tweet

Evidently our Chromebook had a ChromeOS update since the Setup Guide. In the images in the Setup Guide and Reviewers Guide, the Launcher icon (nine blocks arranged in a square to illustrate the Apps Display window) was the farthest icon to the left on the bottom of the screen. Now the search icon (a magnifying glass) has taken its place. And when we opened the Apps window, it appeared in the middle of the screen, not in the bottom-left corner like the old Windows Start box.

Is it better than the earlier version we saw last year? Not sure, but now you consistently start a search for terms or available apps by hitting the Search Key, so perhaps that extra bit of focus on the Search Key makes more sense. It’s not a big difference to users, but a switch from earlier versions nonetheless.

Daily Use
Early Chromebooks focused on low price rather than high performance, and you can’t fault Google and the hardware vendors for that choice. But the speed difference using Chrome on a good laptop or desktop versus a Chromebook was significant. With this C910-54M1 Acer Chromebook, that speed difference has disappeared. The combination of an Intel Core i5 processor, 4GB RAM, and a 32GB solid-state drive makes this Chromebook fast enough that you start complaining about your Wi-Fi and Internet speeds rather than underpowered hardware.

By the time you pull the lid open completely and get ready to type, the OS is waiting for your password. Once typed in, windows snap open, apps pop, and full-screen streaming videos flow smoothly no matter what’s on screen, including action movie trailers. Supporting all of the standard Wi-Fi options, including 802.11ac with MIMO technology (both 2.4GHz and 5GHz frequencies), keeps videos and other content moving.

Acer does quite well in the education market, and this model’s design takes student use and abuse into consideration with a tougher plastic cover, reinforced corners to survive drops, and upgraded speakers for much better sound. Two students can share a 15.6-inch Chromebook more efficiently than they can an 11-inch model, saving schools money in some cases. The lid hinges appear well-engineered, and at almost 5 pounds the unit feels as solid as any knowledge worker laptop on the market.

The Chromebook C910 has the best sound we’ve ever heard from laptop speakers. Bass is lacking so Nightwish and Krewella fans won’t be happy, but the speakers get more than loud enough to trigger a trip to the principal’s office when played full blast in a classroom. Stereo separation and “air” and openness sound darn good.

Screen resolution is only 1920 x 1080 in a world with newer laptops zooming quality up to 2560 x 1440 (Acer Aspire R 13) and 3200 x 1800 (Dell XPS 13 Ultrabook), but videos are smooth, colorful, and solid, if not eye-popping. Since Acer makes some of the best new monitors and laptop screens, the resolution choice here must be made with economics, not technology, as the limiting factor.

LG Gram for Business 17 (2020): Big Reasons to Like It
END_OF_DOCUMENT_TOKEN_TO_BE_REPLACED