Acer Aspire R7 Review: A 2-in-1 Laptop with Ezel Hinge 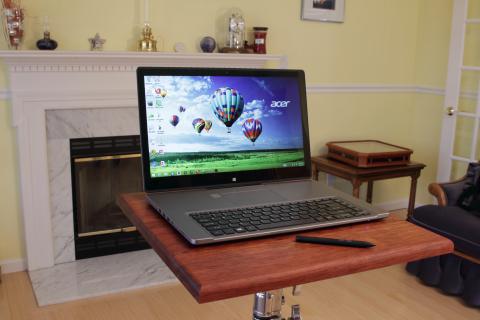 The R7’s Ezel hinge is innovative and useful, but is it enough to make the laptop stand out against other 2-in-1 designs? By John McCormick
Tweet

I have to confess that I have generally shied away from Acer as a brand. Over the years I haven’t been impressed with the company’s gear, and viewed Acer as a “last resort” brand to buy. However, my opinion is starting to change.

The Acer Aspire R7’s most interesting feature is the Ezel hinge, which enables the laptop to be used in the traditional clamshell configuration, as a tablet computer, or as a presentation device that puts the screen front and center with the keyboard behind the display. The touchpad is also placed above the keyboard instead of at the more typical in-front position.

The placement of the touchpad makes it a bit awkward to use, but considering the R7 has a touchscreen display and includes a fine-point stylus, many buyers will never even use the touchpad. Best of all, when not using the pad, the R7’s Ezel hinge lets you pull the display significantly closer to you. 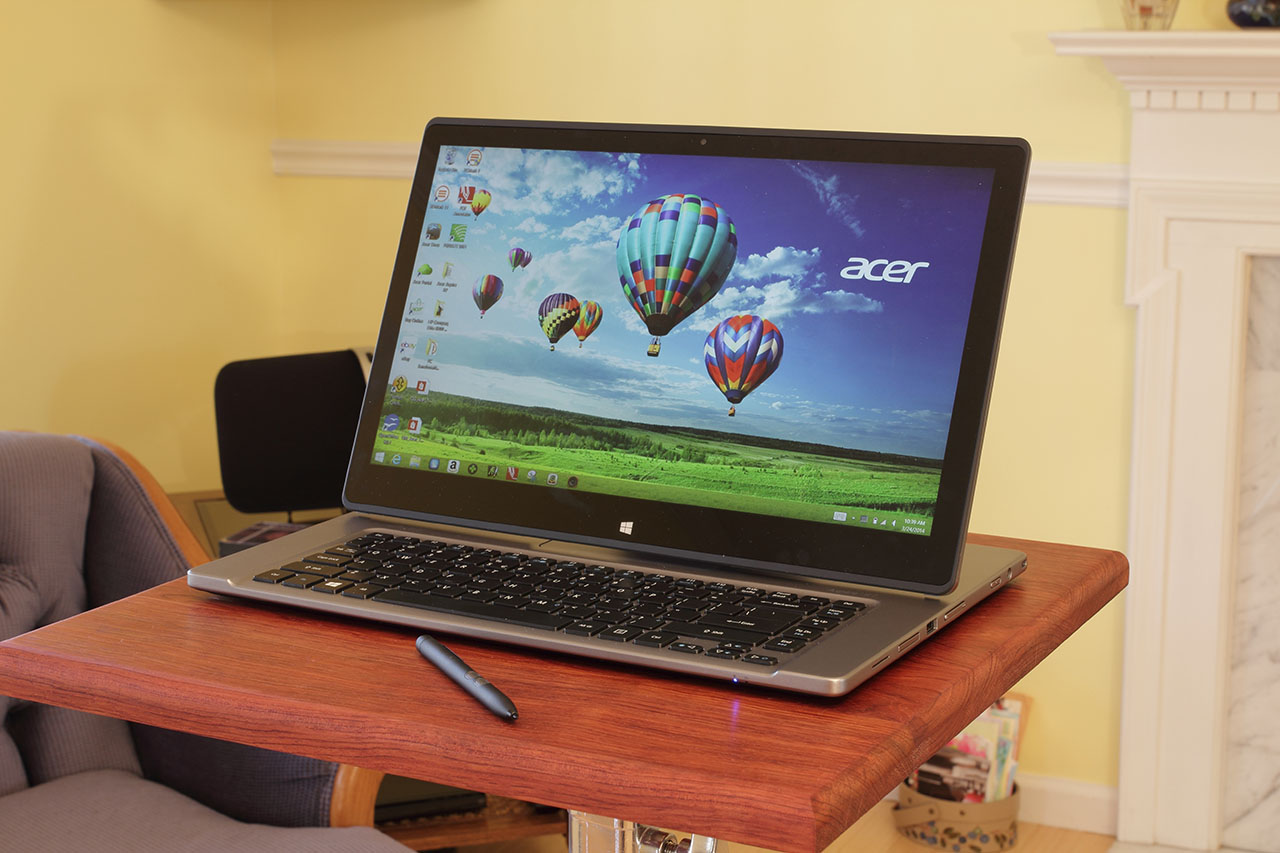 The stylus is the second interesting thing about the R7. Instead of the clunky, felt-tipped pens that come with most tablets, the R7’s stylus has a very fine point and is pressure sensitive, enabling easy, accurate stylus operation. The included ArtRage4 application lets you put that accuracy to good use, and it’s a pretty cool tool for creating drawings or paintings to boot.

The display is a 15.6-inch, full HD 1,920 x 1,080 screen of the LED backlit active-matrix TFT variety, and features 10-point multitouch support. There’s also a webcam in the usual top-center position. This screen has a nice appearance—some LED backlit displays have a rather cool look to them, giving everything a bluish tinge.

The keyboard is in the Chiclet style commonly found on notebooks, and the keys are in a fairly intuitive position. The keyboard is backlit, with a simple function-key press to turn it on or off.

An SD card reader, USB 2.0 port, volume control, power button, and power connector run along the right side of the base. There’s also a Kensington-style security slot, which is sadly disappearing on many Ultrabooks. The left side sports the headphone jack, two USB 3.0 ports (one with power-off charging), an HDMI port for a second monitor, and the Acer Converter Port. Through optional cables, the Acer Converter Port can extend the hardware to include a wired Ethernet jack, VGA display port, or an additional USB port. The back of the unit sports the cooling vents.

The two speakers are located at the front of each side of the laptop and on the bottom, and for built-in laptop speakers they provide some impressive sound. You won’t want to toss out your home stereo, but what you hear is definitely better than the tinny sound you get from most laptops. 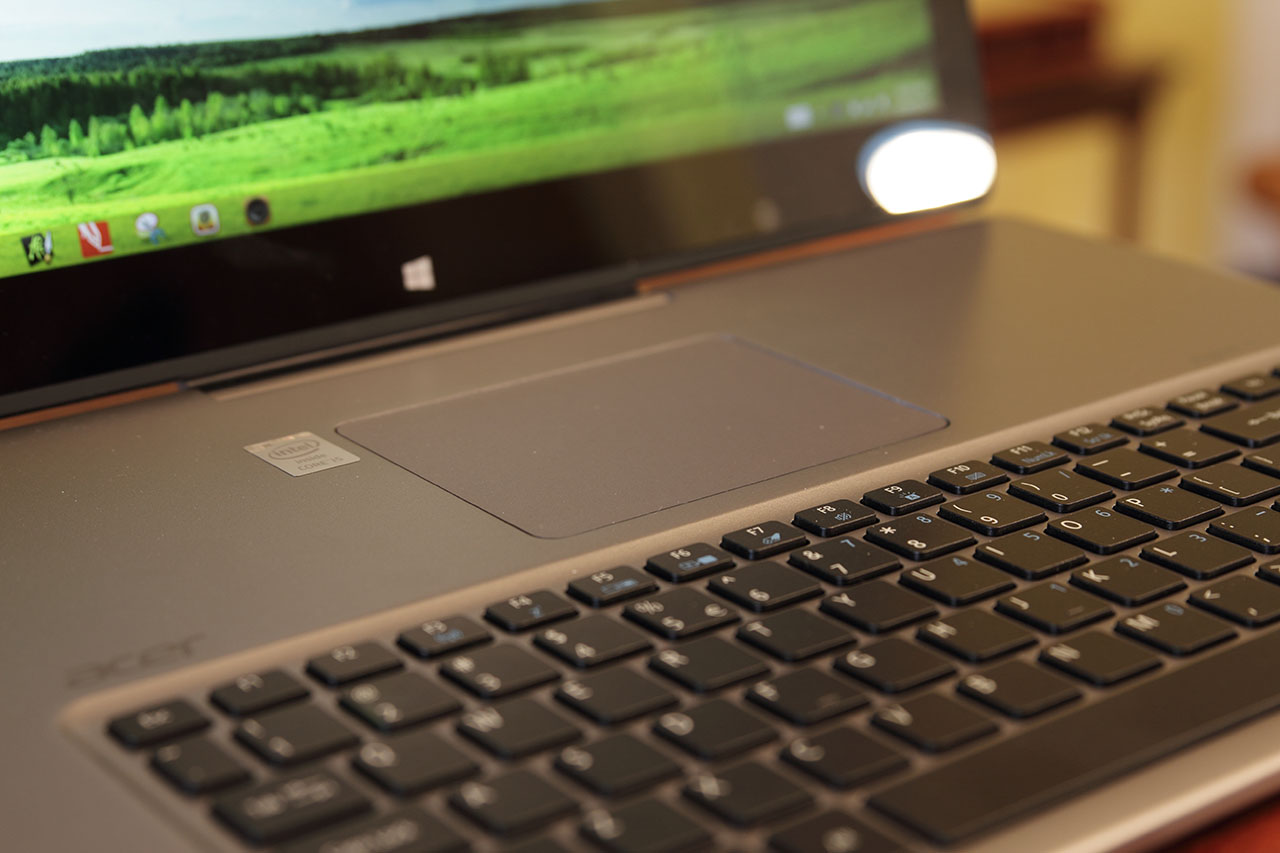 The evaluation unit came with an Intel Core i5-4200U dual-core CPU running at 1.6 GHz. Included were 8 gigs of DDR3L SDRAN and Windows 8.1 64-bit. Since this was my first experience with Windows 8, I spent some personal time with Google to figure out how to get to my favorite functions. Still, I can see the usefulness in most of the UI changes now that touchscreen systems are becoming the norm, but Microsoft should think about including a “remove the fingerprints from the screen” app.

For storage, the laptop comes with a 1TB, 5,400 rpm hard drive with 8MB cache from Western Digital, providing a ton of storage and whisper-quiet operation. A Broadcom 802.11a/b/g/n network adapter provides access to Wi-Fi networks.

Controlling the display is an Intel HD 4400 controller built into the i5 processing chip, with 20 execution units for graphics, OpenCL, and OpenGL processing.