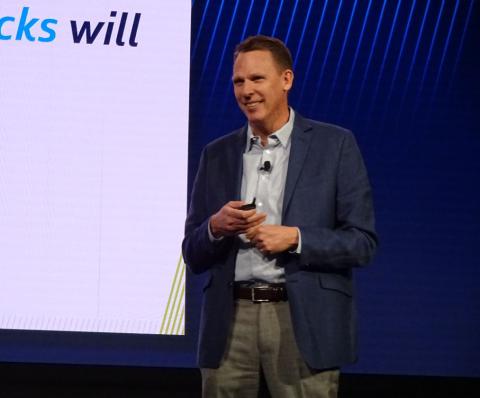 The news that private equity investor Apollo Global Management has entered into an agreement to purchase distribution leader Tech Data for some $5.4 billion came as a surprise to most of the company’s partners. It came as a relief, by contrast, to Senior Vice President of North American Sales Marty Bauerlein.

Pending shareholder approval of the deal, he told attendees this morning at its Security Enforce event in Tempe, Ariz., Tech Data can continue pursuing opportunities in next-generation markets like cloud computing, the Internet of Things, and security without answering to the short-term priorities and quarterly scrutiny of Wall Street or Main Street investors.

“You wouldn’t believe how incredibly difficult it is to be on a 90-day shot clock,” Bauerlein said. “Every single quarter you have to report and it's very difficult for you to invest in the long term, because everybody wants a return on invested capital right away.”

Under private ownership, on the other hand, Tech Data will be free to place big bets that can take time to deliver big results. “It allows us to invest more in our long term, more in our people and our portfolio of products,” Bauerlein said.

And make no mistake, he continued, Tech Data has big results on its agenda. In its 2019 fiscal year, which closed January 31st, the company reported $37.2 billion in net sales. “Our goal is to be a $50 billion company really soon,” Bauerlein said.

Tech Data itself won’t be the only ones to benefit from the Apollo purchase, he added. “This is actually going to be very good for our customers, it’s been good for our shareholders, obviously, and it's going be very good for our vendor partners, and we are really excited about it,” Bauerlein said, citing the “major investments” the company plans to make in the future, like the millions it poured into its newly opened Cyber Range security education and demo facility.

In the meantime, he strove to assure his audience, anyone who’s nervous about what happens after the acquisition closes needn’t be.

“Since 1974, the customer is the center of everything we do,” Bauerlein said. “There’s going to be no account changes, no customer disruption at all.”

Partners can expect financial performance to remain strong as well, he added, though growth has slowed recently. Net sales, which rose 11% in Tech Data’s fiscal 2019, were flat for the first two quarters of the current year. From Bauerlein’s perspective, however, the numbers that matter are healthy.

“We’re seeing very modest growth in the enterprise segment,” he said. “Where we’re seeing massive growth is in SMB and mid-market.”

As a result, he continued, the company is investing more heavily in those segments. “We're pumping money back into the business you guys need,” Bauerlein said. “We're going to keep pushing the chips in, guys, because that's what we do for you.”