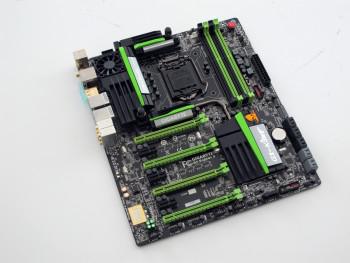 The G1.Sniper 5 and G1.Sniper M5 will include high-quality audio. By Rachel Cericola
Tweet

Recently, Gigabyte invited the media into its Taipei headquarters to show off a pair of motherboards known as the G1.Sniper 5 and G1.Sniper M5. At this point, nothing has been formally announced, but we've got a little teaser to show you what to expect when the duo is released.

Based on the Intel Z87 Express chipset, both of the LGA1150 motherboards are built for Haswell processors, with some killer audio enhancements. That audio comes from the built-in Creative Sound Core3D chip, the TI Burr Brown OPA2134, and the TI Mouser LM4562NA.

The G1.Sniper 5 is the larger of the two units. According to Legit Reviews, it has four PCIe x16 3.0 slots, with the PLX PEX8747 48-lane PCI-Express 3.0 bridge chip. That basically means that it can be configured a variety of ways, which includes making a 4-way NVIDIA SLI or AMD CrossFireX.

Around the back, the G1.Sniper 5 has Qualcomm/Bigfoot Killer K2000 and Realtek RTL8111F gigabit Ethernet connectors, as well as six USB 3.0 ports, two USB 2.0 ports, two HDMI and DisplayPort outputs, and a spot for the legacy PS/2 keyboard/mouse combo. It also has an Op-Amp socket and 7.1 audio ports.

The company has yet to make an official announcement about either of these motherboard options, so that means there's no word on pricing and availability. If the web rumors are right, all of that info (and maybe even the products) should be coming in early June.