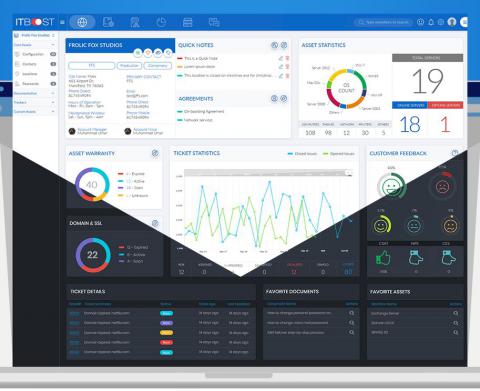 Updates to the documentation system allow users to create tickets in ConnectWise Manage or remote into endpoints via ConnectWise Control without changing interfaces. Enhanced synchronization with Manage and ConnectWise Automate is now available too. By Rich Freeman
Tweet

ITBOOST, the former standalone managed services documentation solution that officially became part of the ConnectWise software suite for MSPs last week, has gained new functionality aimed at enabling it to serve as a single pane of glass for managed services technicians.

ITBOOST’s founders, who now head up the ITBOOST product group within ConnectWise, discussed the updates with ChannelPro during the ConnectWise IT Nation Connect partner event in Orlando last week.

“There’s a button right there to create a new ticket. Once he saves it, he goes back to what he was doing before,” says Ali Peracha, formerly CEO of ITBOOST and now vice president of product at ConnectWise in charge of that system. “He doesn’t have to now leave the tab, find Manage and whatever screen that he’s at, go into a particular board that he wants to go into, go find the customer, create a new ticket, find whatever he’s looking for, and make sure that ticket isn’t already open.”

“They can just click on remote control and log into the machine rather than now going into Manage or [ConnectWise] Automate or any other system that integrates with Control,” Peracha says.

“It took about an hour to two hours for that cycle to run,” Peracha says.

ITBOOST now automatically synchronizes data with ConnectWise Automate once a day as well. In the past, technicians synched data manually on an ad hoc basis. “Now it’s going to be every 24 hours,” Peracha says. The process takes place overnight, he adds, to minimize disruption for users.

Finally, technicians working in Manage can now view near-real-time data from ITBOOST via seven new “pods” that show information about an endpoint configuration, for example, inside the PSA system’s interface.

“If they’re looking at that in Manage, they have all the linked items, all the notes, all the attachments that they’ve done in ITBOOST [and] they see that directly within Manage,” Peracha says.

ITBOOST has security-related updates coming as well in the next three to five months, including the addition of data encryption at rest. “That means every field that goes into the database is going to be encrypted,” says Peracha, adding that the new capability is scheduled to arrive in December.

Another forthcoming addition to the system will split the key needed to decrypt customer passwords into two halves, one of which will reside with ITBOOST and the other of which the user will control. That will make accessing encrypted passwords impossible for anyone but the MSPs responsible for them.

Jabra PanaCast Review - Get Your Huddle On
END_OF_DOCUMENT_TOKEN_TO_BE_REPLACED