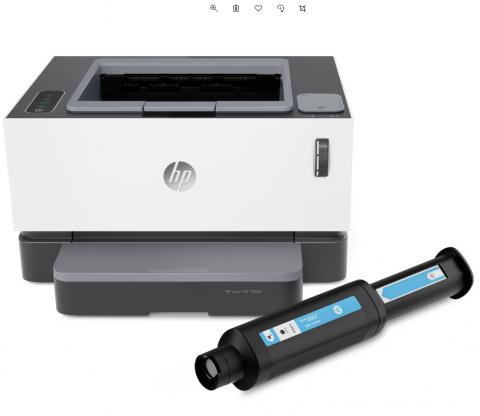 The new Neverstop Laser family is designed to help home-based and other small companies that print large numbers of black-and-white documents enjoy the convenience and savings long available to owners of tank-based inkjet printers. By Rich Freeman
Tweet

Smart App users can also create and execute “Smart Tasks,” automated workflows for repetitive processes like scanning and submitting expense report receipts, or print directly to any Neverstop unit from any location with internet access. Support for mobile printing is increasingly a necessity for small businesses, according to Walter.

All Neverstop printers allow users to send faxes through the Smart App as well. Businesses in the insurance, medical, and legal industries, among others, still send faxes in large volumes, according to Walter, who adds that many SMBs these days can’t use fax machines to accommodate that traffic.

“We’re seeing a trend where many homes in particular no longer have landlines,” he says. “If you buy a traditional fax product, there’s actually nothing to connect that [device] into.”

There are currently two sets of Neverstop products. The initial offering in the 1000 series of single-function units comes with an LED display, onboard wireless networking, and a $279 MSRP. The two multifunction units in the 1200 series offer an LCD display as well as support for flatbed scanning, and are priced at $349 with Wi-Fi and $329 without it.

All three printers produce up to 21 mono pages per minute. “It’s the same speed as our other HP laser printers,” Walter says.

HP expects existing SMB-focused products like the HP Laser 107 and HP Laser MFP 136a to remain popular with some buyers. “Some customers would prefer to just pay less upfront and buy toner cartridges as they need them,” he says. Neverstop devices, by contrast, target users who are willing to pay more at purchase in order to save money on consumables over time.

Neverstop printers have been available in emerging markets globally since last year. The models showcased today are the first available to buyers in the U.S., Canada, and several European countries.

HP unveiled the Neverstop family on what was originally scheduled to be the opening day of its annual Reinvent conference. That event has been postponed until the fall due to the COVID-19 pandemic.

ChannelPro 5 Minute Roundup for the Week of March 30th, 2020

Beyond Backup Solutions: Preparing for Natural Disasters with Business Continuity