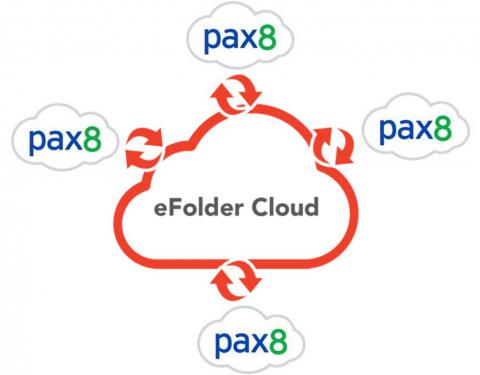 The deal makes the Anchor file sync and share and Cloudfinder data backup solutions available through an indirect channel, and in small order quantities, for the first time. By Rich Freeman
Tweet

The deal, which was announced in conjunction with IT industry association’s CompTIA’s ChannelCon partner conference in Washington D.C. this week, marks the first time either product has been available from a supplier other than Denver-based Axcient/eFolder itself. It also makes the two systems available in quantities of less than 25 seats for the first time, unleashing what Axcient/eFolder believes to be pent-up demand among MSPs for the ability to place small-volume orders.

“Our salespeople aren’t real excited about processing a single Anchor seat for 10 bucks,” notes Jason Bystrak, vice president of worldwide channels and distribution at Axcient/eFolder. Now they can funnel those opportunities to Pax8 instead and receive the same commission they would have earned had they closed the deal themselves.

“We’ve arranged for compensation parity,” Bystrak says. “They’re paid as if they went direct.” Both Axcient/eFolder and Pax8, of Greenwood Village, Colo., expect that arrangement to drive greater collaboration between the two companies’ sales teams.

Partnering with Pax8 will also boost Anchor and Cloudfinder sales, Bystrak predicts, by enabling MSPs to include those systems in multi-product bundles more easily.

“We need to be there with Microsoft and with Symantec and those types of complementary solutions,” Bystrak says, naming other vendors on Pax8’s linecard. Pax8’s operational systems make selling products from multiple suppliers simpler and therefore more attractive for MSPs, he continues, by automating the complex task of combining multiple SaaS products with varying billing schemes on a single consolidated invoice.

The backend integration between Pax8’s infrastructure and leading PSA systems, Bystrak adds, was a further factor in Axcient/eFolder’s thinking.

Pax8 has made enhancing those links a consistent priority. In April, for example, it rolled out functionality enabling users of the ConnectWise Manage PSA platform to bill customers for cloud-based solutions in advance as well as in arrears. Two months later, it armed users of the Autotask PSA solution, from Norwalk, Conn.-based Datto Inc., to import company data, export product and service records, and update contract information.

“It used to be something that you didn’t see as much,” he says. “Now you almost see it as a requirement.”

An employee of broadline distributor Ingram Micro Inc. for more than 22 years, Bystrak joined the company then known as eFolder Inc. in January. Pax8 and Axcient/eFolder were already exploring an alliance at the time, Walsh says, but having Bystrak at the table helped accelerate the deal.

“It got more exciting, because he had such a great reputation and we knew each other,” Walsh says, noting that he and Bystrak have served together on CompTIA advisory boards in the past.

Axcient and eFolder merged a little over a year ago. According to Bystrak, the now combined company has no immediate plans to forge additional distribution pacts for Anchor, Cloudfinder, or other Axcient/eFolder products, such as the Replibit BDR solution.

“We’ll explore things down the road,” he says.

Acronis Adds Advanced File Sync and Share Pack to Cyber Protect Cloud
How Would You Rate Your Help Desk?
END_OF_DOCUMENT_TOKEN_TO_BE_REPLACED

Jabra PanaCast Review - Get Your Huddle On
END_OF_DOCUMENT_TOKEN_TO_BE_REPLACED