Smarter Cities Require Optimism and a Practical Approach to the Challenges

One of the world's first electric traffic signals was installed in Cleveland, Ohio in 1914. It helped direct the rapidly increasing volume of automobile traffic through what has become the familiar red, green, and yellow lights we still use today. The system included rudimentary logic to prevent signaling conflicts and user error. This was, at the time, a momentous technological leap over the existing practice where a police officer would stand in the middle of an intersection directing traffic.

While computing technology has been making cities smarter for more than 100 years, today, many facets of our cities – from transportation and water management to building design and public safety, are viewed as ripe for reinvention. Inexpensive computing, sensors, and data storage, coupled with reasonably fast wireless connectivity and a large base of tech-savvy users provide the foundational ingredients for further digitizing our cities. Add in cloud computing, big data, artificial intelligence, robotics, and a host of other cutting-edge technologies and a Jetsons-like future seems increasingly within reach. 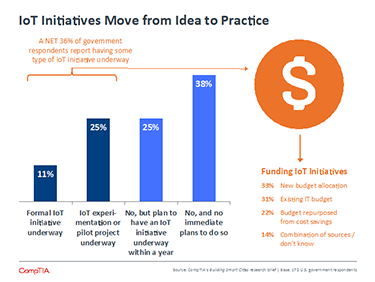 CompTIA's research brief Building Smarter Cities, conducted among government representatives at the federal, state, and local levels, confirms the continuing transition of IoT and smart cities from theory to practice. Nearly 3 in 4 respondents report having more positive views of IoT today compared to two years ago. Moreover, 11 percent of government entities claim to have a formal IoT initiative underway, while 25 percent report some type of pilot project in the works.

Many of these early stage efforts can be characterized as smart city initiatives, a sub-segment of the broader IoT trend. The areas where governments see the most likely applications in the short-term include energy management, public safety, and transportation. As the market further matures, expect offerings such as smart cities-as-a-service to gain traction, allowing cities with time or expertise constraints to utilize technology solution providers and MSPs for end-to-end service.

According to the research consultancy Gartner, an estimated 1.6 billion connected things will be used in smart cities by year-end 2016, a figure projected to grow 42 percent through 2017. CompTIA's IoT Ecosystem Framework, which can be applied to smart cities, reinforces the need to think beyond simply the number of connected things and focus on the interdependencies between the hardware, software, services, and rules components.

Complexity and interoperability will be key challenges to overcome. Even tech-savvy city staff may quickly find themselves in unfamiliar territory when it comes to systems integration. For the market to progress past the early adopter stage, expect greater involvement and support from the technology solution provider and MSP communities. Firms with expertise in integration, APIs, cloud computing, data, and security will be key to facilitating smart cities' growth. Expect concepts such as 'smart cities-as-a-service' to gain traction as a means for providing efficient and effective end-to-end solutions.

ADTRAN Planning First Concerted Push into IoT
September 8th, 2020
Plan a Career in Technology with My IT Path from CompTIA
March 11th, 2020

ChannelPro 5 Minute Roundup for the Week of January 11th, 2021
END_OF_DOCUMENT_TOKEN_TO_BE_REPLACED

Jabra PanaCast Review - Get Your Huddle On
END_OF_DOCUMENT_TOKEN_TO_BE_REPLACED