In collaboration with the Microsoft Threat Intelligence Center (MSTIC), we are excited to announce Fusion detection for ransomware is now publicly available!

In order to help your analyst quickly understand the possible attack, Fusion provides you with a complete picture for the suspicious activities happened on the same device/host by correlating signals from Microsoft products as well as signals in network and cloud. Supported data connectors include:

The screenshot below shows a Fusion incident with 22 alerts. It correlates low severity signals that were detected around the same timeframe from the network and the host to show a possible ransomware attack and the different techniques used by attackers. 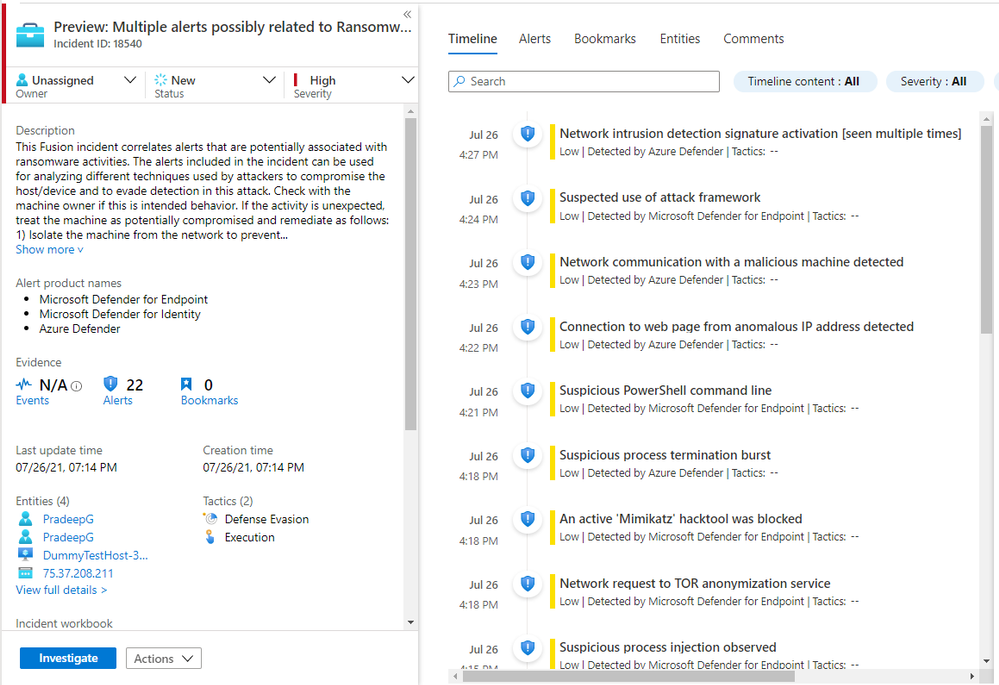 Why Fusion detection for ransomware?

Ransomware attack is a type of attack that involves using specific types of malicious software or malware to make network or system inaccessible for the purpose of extortion – ‘ransom’. There is no doubt that ransomware attacks have taken a massive turn in being the top priority as a threat to many organizations. A recent report released by PurpleSec revealed that the estimated cost of ransomware attacks was $20 billion in 2020 and with downtime increasing by over 200% and the cost being 23x higher than 2019.

Preventing such attacks in the first place would be the ideal solution but with the new trend of ‘ransomware as a service’ and human operated ransomware, the scope and the sophistication of attacks are increasing – attackers are using slow and stealth techniques to compromise network, which makes it harder to detect them in the first place.

With Fusion detection for ransomware that captures malicious activities at the defense evasion and execution stages of an attack, it gives security analysts an opportunity to quickly understand the suspicious activities happened around the same timeframe on the common entities, connect the dots and take immediate actions to disrupt the attack. When it comes to ransomware attacks, time more than anything else is the most important factor in preventing more machines or the entire network from getting compromised. The sooner such alerts are raised to security analysts with the details on various attacker activities, the faster the ransomware attacks can be contained and remediated. A detection like this will help analysts by giving the compilation of attacker activity around execution stage helping reduce MTTD (Mean Time to Detect) and MTTR (Mean Time to Respond).

Examples of the Fusion detection for ransomware

In the Incident 1example, Fusion correlates alerts triggered within a short timeframe on the same device, indicating a possible chain of attacks from how the attackers got in through possible RDP brute-force attack, followed by the use of a ‘Cryptor’ malware and potential phishing activities using malicious document associated with the EUROPIUM activity group, to the detection of Petya and WannaCrypt ransomware in the network. 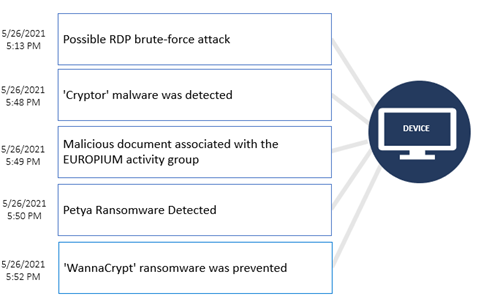 Incident 2below is another example of the Fusion ransomware detection that was confirmed as true positive. This incident correlates alerts showing ransomware activities at defense evasion and execution stages on the same host, along with additional suspicious activities detected during the same timeframe to show you possible techniques used by attackers to compromise the host. 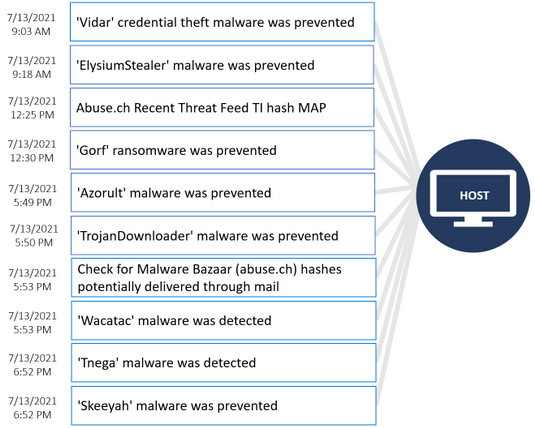 In these Fusion incidents, the alerts related to ransomware/malware detection might indicate that the ransomware/malware was stopped from delivering its payload but it is prudent to check the machine for signs of infection. Attackers may continue malicious activities after ransomware was prevented – it is also important that you investigate the entire network to understand the intrusion and identify other machines that might be impacted by this attack.

What’s next after receiving the Fusion detection?

After receiving Fusion detentions for possible ransomware activities, we recommend you to check with the machine owner if this is intended behavior. If the activity is unexpected, treat the machine as potentially compromised and take immediate actions to analyze different techniques used by attackers to compromise the host and to evade detection in this potential ransomware attack. Here are the recommended steps:

As you investigate and close the Fusion incidents, we encourage you to provide feedback on whether this incident was a True Positive, Benign Positive, or a False Positive, along with details in the comments. Your feedback is critical to help Microsoft deliver the highest quality detections!

ChannelPro 5 Minute Roundup for the Week of October 18th, 2021
END_OF_DOCUMENT_TOKEN_TO_BE_REPLACED

LG Gram for Business 17 (2020): Big Reasons to Like It
END_OF_DOCUMENT_TOKEN_TO_BE_REPLACED