Drone/UAV Predictions for 2022: From Agricultural Benefits to Remote ID Expansion 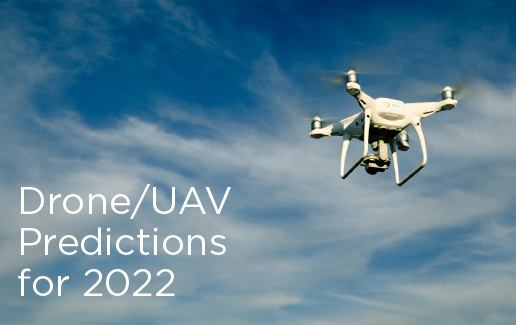 There are a lot of reasons why MSPs should get excited about drones, which doesn’t even include a projected 20+% growth rate for the next several years. But if you’re not familiar with the technology—or its applications in the business space—there’s a lot you need to know. A comprehensive guide to standards and best practices is a good place to start, but it’s also a good idea to hear firsthand from some of the industry’s experienced thought leaders.

We asked members of CompTIA’s Drone Advisory Council on what to expect in the drone/UAV market for 2022. Their responses ranged from new technology innovations to the potential impact of new standards and regulations. Here’s what they had to say:

“I’m looking forward to wider adoption of spray drones for agriculture, as they have significant potential to reduce costs, increase safety and lower chemical usage. Agriculture is a big opportunity for drones and the more that customers see the business benefits and innovations occurring in our industry, the more productive and efficient they will be.” – Adam Gittins, general manager, HTS Ag

“This year we will see drones being used more and more for infrastructure inspection such as our country’s roads, bridges, buildings, and telecommunications. Another thing to watch out for is the use of artificial intelligence in drone data analysis, data processing, and navigation. We are excited to see the industry growing at an exponential rate!” – Ted Parisot, co-founder, Helios Visions

“This year we will continue to see more influence from the National Institute of Standards and Technology (NIST). As the year progresses, more organizations and educational institutions will adopt the NIST sUAS Standard Test Methods. This will have a positive impact and add value industry-wide, by providing repeatable, scalable way to measure hands-on pilot proficiency.” – Dave Krause, co-owner of Influential Drones

Use Cases Continue to Help Improve the Physical World

“2022 will continue to see additional use cases for UASs. These remarkable machines not only carry increasingly sophisticated cameras and measurement devices, but their capabilities are extending into modifying the physical world. For example, UASs can now gather water samples (including those from a whale spout), plant seeds, spray chemicals on crops and structures, take contact-based physical measurements on flare stacks and above-ground storage tanks, and more. As UAS technology continues to develop, we will see more and more use cases and the value they unlock will continue to expand.” – Robert Dahlstrom, founder and CEO of Appelix

“Innovations in the automotive and precision robotics industries will bring a rapid expansion of aircraft equipped with light detection and ranging-equipped (LiDAR) in 2022, capable of delivering strips to the cloud, or directly into post-processing systems on the ground. Leveraging AI-infused technologies, real-time kinematics for precise positioning will become more commonplace vs. a luxury or add-on for specific verticals. Coupled with LiDAR and photogrammetry, remeasuring the continent and infrastructure will drive many developments and channel offerings. We’re already seeing much of this growth as a beneficial fallout from the prolific use of LiDAR/laser scan technologies in other industries, as costs of LiDAR have fallen by more than 75% in the past two years.” – Douglas Spotted Eagle, Instructor/Examiner UAV, Sundance Media Group.

“The American National Standards Institute (ANSI) released the ANSI UASSC Standardization Roadmap for Unmanned Aircraft Systems in June 2020 as part of the Unmanned Aircraft Systems Standardization Collaborative (UASSC). The American Society for Mechanical Engineers (ASME), the Association of Materials Protecion and Performance (AMPP) and additional standards are definitely on the way in 2022 and beyond. This definitely indicates the industry is taking UASs seriously and starting to integrate them into their standards bodies.” – Robert Dahlstrom, founder and CEO of Appelix

“The AEC and GIS communities adopted both photogrammetry and LiDAR at an unbelievable pace in 2021, and 2022 will well-serve the new Federal infrastructure directive, providing greater safety, efficiency, quality, and all at a lower cost to corporations using this data for as-built, BIM, dirt prep/removal, takeoffs, inspections, boundaries, etc. Visualization of data is advancing as well, with what was once considered proprietary workflows becoming commoditized.” – Douglas Spotted Eagle, Instructor/Examiner UAV, Sundance Media Group.