The Beginning, Middle, and End of My Relationship with Microsoft

By Karl Palachuk
Tweet
Way back in 1993 I found myself in charge of a program to take an entire service business built on Cobol, EBCDIC, and HP-3000 mini computers and create a new system based on Windows Server and SQL. In addition to managing an entire staff of people who ran the entire operation, I managed two COBOL programmers, on SQL programmer, and an outsourced development company that built the new systems based on a 300 page design document I put together.

That was my introduction to Microsoft. Within two years I was pretty good with managing Windows servers, desktops, SQL databases, Exchange, remote access, and IIS. That's when I signed a contract to manage the outsource I.T. support for 5,000 desktops at HP's Roseville, CA plant. 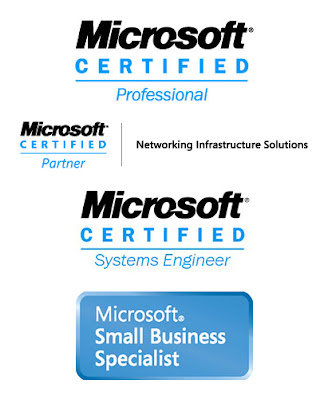 My entire staff (about 25 people) were required to be certified in Windows 3.1 (Note: Not Windows 3.11 for Workgroups. That wasn't yet part of the official Common Operating Environment.)

I was not required to be so certified, but I decided to do it anyway. I figured it would be a piece of cake since I'd been managing Windows desktops and servers for a couple years. Click. Drag. Drop. What's to know, right? Of course I failed that exam because I didn't take it seriously. So I studied and passed with flying colors the second time.

I learned the first two lessons of Microsoft exams. First, they are geared for massive environments that really only exist in theory within the heads of someone at Microsoft. After all, I'd seen small environments (40 users) and huge environment (5,000 users with 7,000 desktop and laptop machines), and the exam did not test the truly important things that you need to know to manage these environments.

The second thing I learned is that there are some questions that you have to simply answer the "Microsoft way" - even if you know they're wrong in the real world. Like any test, you have to practice for the test, not for the knowledge behind it.

But let me be super clear: I believe the test had real value. I believe the decision to have the support staff take these exams was a good decision. Studying for the test required us to learn lots of non-obvious features and the right way to do many things. It gave everyone on my team a common understanding to build on. It really did take our tech support to the next level.

After that, I took a contract to set up a previously-100% Novell shop on Windows servers, connect them to the Internet, and develop a way to move EDI (electronic data interchange) information over the Internet. I felt that I needed to be as certified in NT as my Novell counterpart was in Novell. So I took exams for Windows Server, TCP/IP, and more. Without realizing it, I was moving toward my first MCSE certification.

Beginning in 1995, I put a Microsoft MCP logo on my business cards. Starting in 1999, I began telling clients that we hired only Microsoft trained and Microsoft Certified Professionals. And I really pushed that. I absolutely reject the notion that certifications are meaningless. Yes, there was a time when you could take a crash course boot camp and pass all the exams in a weekend. But even to do that, you have to gain some knowledge.

I don't remember if we became a Microsoft Certified Partner in 2000 or 2001. But somewhere along the line, we jumped through some hoops and got an extra logo we could put on all of our materials and business cards. Again, we hire only Microsoft trained and Microsoft Certified Professionals.

Getting client endorsements and cases studies was useful. In fact, it's great experience in exactly the kind of things that small businesses should do with their clients but often fail to do. And it's also the case that the vaste majority of our competitors would never be certified partners. They wouldn't jump through the hoops.

I'm not sure clients ever understood the difference between logos. One Microsoft Exam gets you an MCP logo. Then there's MSCE. And finally Microsoft Certified Partner. The only time a client ever mentioned the logos to me was when someone said, "I know you have to provide the Microsoft solution." I said I don't have to. I choose to because it's the right solution.

Even more valuable to us than the Certified Partnership was the Small Business Specialist program. We used this as a screening tool for years. Everyone we hired from about 1999 on had to have at least one Microsoft exam under their belt. With the SBSC program, we also required that they pass the 70-282 exam. It wasn't really a Small Business Server exam, but it was a great exam for the technology and the clients we were focused on. New hires had 90 days to pass that exam or look for another job.

Even after that program ended, we required at least one Microsoft certification. Every once in a while I would be a lengthy email from a candidate telling me how useless the exams were and how I was ignoring great talent (like him). My response was always the same: If it really doesn't mean anything, go pass an exam. I'll reimburse you for the exam fee.

I always paid my employees to study for exams. I bought practice test software. I had shelves full of books. We even had a machine dedicated to practice exams. I paid for every test they passed, and gave them time off work to take it. And I gave a them a raise for every exam they passed.

All that studying and practicing made my staff better at delivering real service and solving real problems. So I don't care whether any one exam was useful. The whole process of having continuous training be part of our environment made our company better.

Somewhere around 2008 it had become clear that Microsoft no longer cared about the smallest partners. I have friends at Microsoft who would argue with that and may feel hurt that I would say it. But there's nothing new here. Microsoft has completely moved away from the program of engaging small resellers and consultants.

I have learned with several large companies that I can't have more loyalty to them than they have to me.

Around 2009 we stopped putting Microsoft logos on our business cards. We still required the certifications, but we no longer considered it a selling point. Microsoft was actively moving away from small business - and we were actively moving to cloud offerings that may or may not include Microsoft.

When I sold my first managed service business (2011), the new owner did not renew the Microsoft Partnership. And even though he has a few MCP exams under his belt, he never put Microsoft logos on letterhead or business cards.

I stepped down to an Action Pack subscription and whatever they called the non-certified non-partners in the non-partner program. I wanted software to run my business and influence clients with my new companies. But then a new set of problems cropped up.

Some software (versions of Office 365) would not install. Fights between the partner program and Office support led nowhere. So I downloaded the code and installed directly. Then there were problems with those licenses and more hassles with tech support. Eventually, I just deployed Office licenses to myself via Intermedia or Rackspace. Click. Done.

At this point, the only thing I used the Action Pack for was server licenses. It's nice to build up a few different configurations and make YouTube videos or write blogs posts about them. (e.g., Booting HP Proliant Server from an SD Card). But I can also do that with demo downloads.

I have one simple onsite server that I use for internal use. That kept me in the Action Pack program.

In a convoluted fuster-cluck, I can either sign in with my MCP ID ([email protected]) or manage my Partner Program with the same logon, but I can't get the system to acknowledge that both of these are really me at the same time. So the pages go round and round in a never ending circle of frustration.

That's when I realized that I've been selling Windows Server Essentials for years - at less than the cost of the Action Pack.

So while some primordial part of my rodent brain wants to solve the technical problems with Microsoft's Partner Portal, the truth is, it doesn't matter. I don't need it. I don't use it. I throw them $500 once a year in order to stay legal for a product that costs less than $300. I get no advice, no usable software. I get nothing from the program. So I'm going to stop. It's just become a bad habit.

In case you're wondering about the "value" of my Azure licenses through the Action Pack: I don't use that. I have a separate Azure subscription that I use for running a different business. I don't want to run that on Partner Program subscription. The cost of Azure is so cheap that there's no point in running something mission critical on anything other than a legit subscription. Just my opinion.

Is that the end? Is that really how my relationship with Microsoft just fades away? Maybe.

I have enjoyed amazing programs and benefits from my relationship with Microsoft over the years. And it would be great to have a relationship like that again. But today, it's not worth it.

No hard feelings. No blow up. Just quietly fading away.