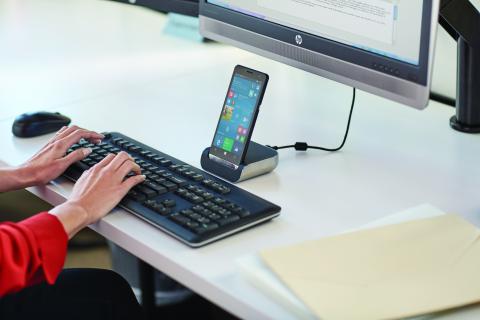 With new devices from HP and Lenovo, Windows Mobile looks to businesses to find relevancy in a mobile market dominated by Apple and Google. By Matt Whitlock
Tweet

I know how I got started; I remember it vividly. It was October of 2010, and I was tasked with reviewing the Samsung Focus, at the time a new device running Windows Phone 7 Series (that’s what they called it back then). There was no warning on the box of any kind, and not a mention of the addictive demon that lay within. There were bold colors on a black background, applications that seamlessly tied together things like contacts and photographs, and simple square tiles that came alive with personal pictures and useful information. It was unlike anything I had ever used.

I tried to go back to my normal mobile life, but every time I had to launch app after app just to get the weather, a preview of a text I received, the cover art for a band that was playing, what my wife just posted to Facebook, or my next appointment (or, for heaven’s sake, more than one of those things), I’d remember that Samsung Focus and get the urge to feel the unique simplicity of Windows phone again.

I tried not to succumb to it, but eventually I broke down and picked up a Focus of my own (pictured here in my gallery of weekly hardware museum picks). I’ve been hooked ever since. I’ve attempted to quit several times, but the Lumia 920, 1020, and 950 just kept bringing me right back.

It’s six years later, and now I feel like an addict to a niche drug no one uses anymore, with no access to a dealer. The Nokia cartel saw Windows phones as the next big thing and took over the market early, eventually pushing out every other dealer and sucking up the entire supply. The Nokia cartel couldn’t sell enough product on the streets themselves and threatened to sell a more popular drug, so the supplier (Microsoft) had no choice but to take over the cartel and go direct to market.

And so, Microsoft did what it often does and seemingly tried everything possible to ensure that Windows phone would fail. There’s actually a lot more to it than that, of course, but I’ll save that laundry list of mistakes and missteps for another day.

With the Nokia cartel gone and Microsoft showing an apparent lack of interest in competing in the consumer market, HP and Lenovo are hitting the streets with a fresh, 3-in-1 pitch and new devices aimed at businesses.

The 3-in-1 selling point comes from Windows’ Continuum feature. Continuum first debuted in Windows 10 for PC, and allowed Windows to dynamically adapt for touch and desktop-optimized experiences on 2-in-1 devices. In Windows Mobile, Continuum allows the phone to connect to external peripherals and present a desktop-style experience separate from the phone’s UI. As such, with the right peripherals - say a desktop dock and mobile peripherals such as Bluetooth keyboards and mice - a Windows Mobile device can serve as phone, mobile PC, and desktop PC.

The real issue, however, is that the Windows Store software offering isn’t nearly as robust as the vast library of Win32 programs for desktop the iteration of the OS, thereby limiting its “full PC” usefulness. That can be overcome (to an extent) using tools like Remote Desktop, relying more on web-based services, and utilizing cloud infrastructure to run traditional Windows programs remotely. The hope is that Microsoft’s Universal Windows Program model will attract developers and more powerful applications to the store over time, but until some critical mass is achieved in productivity applications, Windows Mobile is at its best when used as a thin client. That’s not saying much, and unless that changes quickly there is nothing stopping the 800-pound mobile gorillas (Google and Apple) from catching up in the near future.

I have to question whether Microsoft can succeed with a 3-in-1 business push, but to give credit where credit is due, it’s taking advantage of a (perhaps the only) unique differentiator that offers a compelling story to larger businesses and government agencies with many, many users who are currently given multiple devices by IT.

Fewer devices does generally equate to lower cost, both in hardware and, to a greater extent, software for necessities such as backup and management solutions licensed per device.

The more significant benefit to 3-in-1 computing is on the security side. There are far fewer endpoints when many users are assigned a single device, and therefore a much smaller attack surface overall. Plus, Windows Mobile doesn’t run legacy applications (at all) nor any untrusted applications, and is therefore much less susceptible to malware, viruses, and other exploits more common to desktop operating systems. No doubt users will still need access to traditional productivity tools and other line-of-business applications that require traditional Windows PCs, but running those in containers in the cloud or in trusted environments accessible via remote services serves to enhance security overall.

Even with those and other benefits, I still question whether or not this concept will truly be embraced. The current crop of 3-in-1 devices can provide a positive user experience as a business-focused phone, as well as a good desktop experience when docked, but a phone and a Bluetooth keyboard don’t make for the greatest mobile PC experience - unless you’re on a plane, and then it’s fabulous. That may change as more peripherals emerge to turn phones into notebooks.

Where workers will likely be disappointed is that most will still want to carry a second phone for personal use, even though Windows Mobile can effectively segregate both personal and business content on a single device. The reason for that stems back to much of what held Windows phone back from greater adoption: Pokemon Go… and the hundreds of other popular applications that are only available to iOS and Android devices. Don’t get me wrong, a lot of the most crucial stuff is there, but users coming from competing platforms will undoubtedly find that one or more of their favorite apps isn’t supported.

Hmm, I suppose that may be a selling point to businesses that would prefer that employees not use their work phones for personal pastimes. Talk about turning lemons into lemonade!

Running Windows Mobile doesn’t mean it’s capable of being a 3-in-1 device. Continuum, the feature that allows the device to extend a separate experience to an external display, requires specific hardware that most older Windows phones and even some current Windows Mobile devices don’t have. Click here to take a look at all the capable hardware available now (or coming really soon) that could very well be the one productivity device a user needs. >>

ChannelPro 5 Minute Roundup for the Week of March 30th, 2020
END_OF_DOCUMENT_TOKEN_TO_BE_REPLACED